Eau Claire community comes together for peace and justice 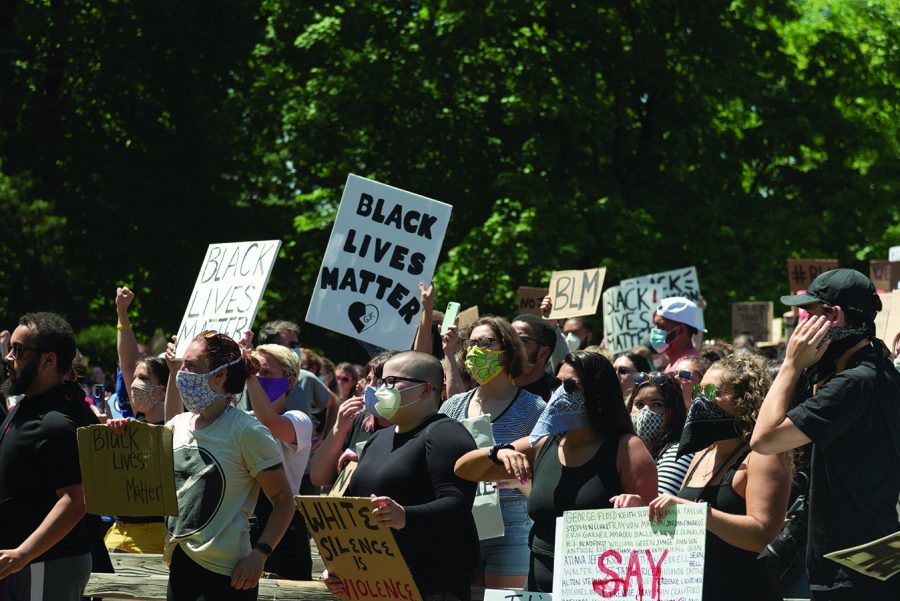 The people of Eau Claire organized a protest on Sunday, May 31 in honor of black lives being taken by police brutality. The peaceful protest started at 12 p.m. at Phoenix Park and ended at Owen Park.

Early last week, a video was released on the internet of a man by the name of George Floyd being held down by a Minneapolis police officer, Derek Chauvin, who was kneeling on Floyd’s neck. Floyd was attempting to pay for cigarettes with an alleged counterfeit $20 bill, resulting in the store clerk calling the police.

With the officer kneeling on Floyd’s neck, he said he couldn’t breathe in the video and died soon after.

Following these circumstances, the world began to protest and riot for black lives.

All across the country, buildings have been set on fire, broken into and destroyed as a result of another black life lost to police, but some cities earlier this week decided to approach things a little more peacefully, like the Eau Claire community.

At 12 p.m. on Sunday, people of Eau Claire gathered in Phoenix Park to peacefully protest the loss of George Floyd, as well as other black lives lost. The protesters ended their walk in Owen Park.

Ed Hudgens, an Eau Claire resident and participating protester, said when he first heard about Floyd’s death, it was more about emotions. But now that everyone is together, there is a little bit of hope that people will see what’s been going on for a long time.

Hudgens said he thinks George Floyd’s death was the tipping point for racism because of the events leading up to it. He said he thinks it comes down to the incident with Ahmaud Arbery in Georgia, the killing of Breonna Taylor and a story released the morning of Floyd’s death about the white woman calling the police on a black man after she refused to leash her dog in Central Park.

Hudgens said those events set the stage for everyone to be on high alert for similar things like that to occur again in the future.

“I’m hoping at the end of this what will happen is that we’ll be able to really take a look at American history and the racism that’s been inherent in not only our history but our systems — the way we do life — and be honest about that stuff and own it and change our ways,” Hudgens said. “I think we’re in a historical moment, I think it’s upon us to seize it,”

Marinez Smith, a third-year social work student and participating protester, said learning of Floyd’s death was outrageous and sickening. She said everything was already so intense and heightened — then the situation with Floyd and the video occurred.

“As a black person, for a second there I really did know myself because you see it so often and it is so prevalent within our history,” Smith said. “So I try my best to acknowledge it without letting it consume my emotions. But at this point, we’re past that. We’re past being upset, past crying, we’re past anger. We need action and we’re going to make it happen.”

Smith said she is hoping for reform of the justice system and in the American policies that say to continuously oppress people of color. She said she wants to see all four officers involved in the incident with Floyd get arrested and for everyone to learn to coexist and unify.

Citizens of Eau Claire aren’t the only ones in support of voicing their opinions. The Eau Claire Police Department showed their support by making sure the protesters could voice their concerns safely.

Joseph Perkins, an Eau Claire police officer, said the rally was great because it was peaceful and allowed everyone to express their opinions. He said seeing so many people there coming together as a community to have their voices heard was good.

Perkins said as far as what happened in Minneapolis to Floyd, it’s a tragedy.

“There’s no thin blue line there, it’s just brutality,” Perkins said. “No one in our department is about it, it’s horrific to have that happen.”

He said hopefully more protests like this can come about and people will begin having their voices heard to make some groundway for the future.

A second Eau Claire officer, Lieutenant Mark Pieper, expressed a similar opinion. He said he is in full support of everybody’s right to be heard, and providing them a safe environment to do that is their job as officers.

He said what happened to George Floyd is sickening and appalling. He said it misrepresents the vast majority of police officers and sets them back on all of the good things they’re trying to do for their communities.

Pieper said he hopes people continue to be non-violent and get their message out to be heard to hopefully spark some change.