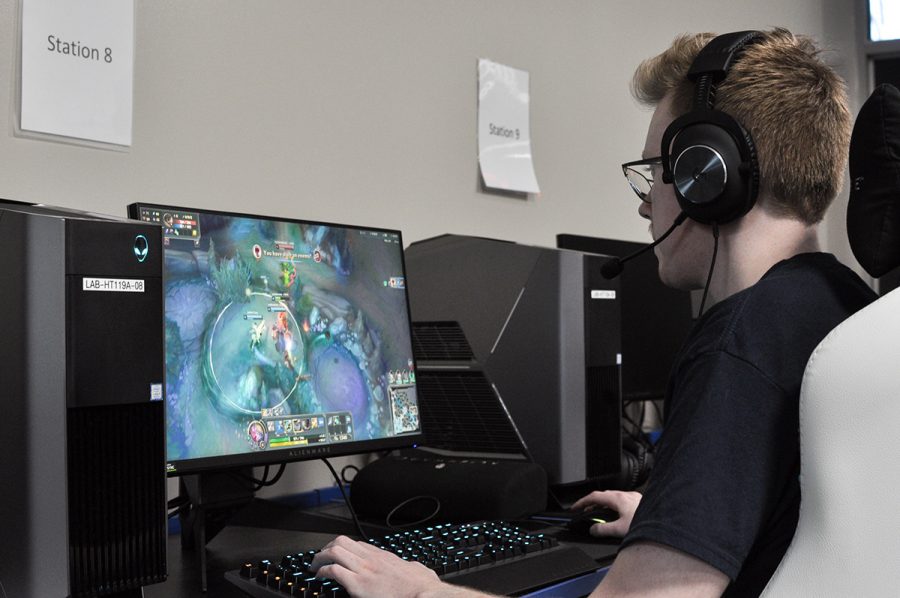 The eSports program offers students a chance to experience competitive and recreational gaming.

When spring semester of 2020 commenced at UW-Eau Claire, a new room had appeared in the Hilltop Recreation Center.

With a new room available, a new club made its debut.

The UW-Eau Claire eSports club has begun this semester and now has a membership of over 100, according to Joe Murphy, a third-year student senator and the director for information technology.

Many people had been working in the background for months securing funding, according to Murphy.

These people were working through logistical road bumps, developing administrative support and working tirelessly to make eSports at UW-Eau Claire a reality.

eSports themselves have had a long, possibly unknown history.

Pong, the 1972 two-dimensional tennis-type game, is considered the first arcade video game by Vanity Fair, but video games as a competitive sport — even a lucrative career for some — is seen as a newly budding concept.

According to Fox Sports, the first eSports event was a Space Invaders tournament that drew 10,000 competitors, with the 1980 championship being in New York.

In 2002, Major League Gaming — an organization dedicated to promoting competitive video games — formed. eSports would still remain in the shadows until Twitch — the live streaming service most commonly used for video games — was created.

Twitch was created in 2006, which ushered in a new era of live viewing. According to Fox Sports, individuals could finally broadcast their competitive or casual gaming live to however many people cared to spectate.

Moving to the present, tournaments and streaming have become full-time jobs for some.

People such as Tyler “Ninja” Blevins, a 28-year-old Fortnite player from Illinois, bring in millions of dollars a year, according to Business Insider, via sponsorships, tournament winnings and subscribers on sites like Twitch, Mixer — Microsoft’s live streaming service — and Youtube.

UW-Eau Claire joined the eSports scene just weeks ago and, although nobody is currently making millions of dollars off of it, it has grown exponentially in the weeks that school has been back in session.

Murphy spearheaded the eSports project. He said he worked to secure funding, find a campus location and propose the concept to the student senate.

Murphy said he contacted Dell, who matched the computers bought by campus.

UW-Eau Claire now has 10 fully-functioning computer gaming setups — including chairs, tables, monitors, keyboards, mice and the computers themselves — located in Hilltop; five of which are using computers provided by Dell.

The rest of the money, according to Murphy, comes from student technology fees.

Garrett Larson, competitive sports director within Recreation and Sport Operations, is credited by Murphy as the co-founder of the club.

“Garrett did a lot of work in the background making the program an official UW-Eau Claire program,” Murphy said. “Really, it was a 50/50 project.”

Now that the club has become a reality, there is a hierarchy of representatives.

They, along with Jazmin Nielson as secretary and Ben Carmichael as treasurer, make up the administrative board.

Lightbody is also one of the two officers of the League of Legends team.

Within each of the games, there are two officers tasked with organization, coaching and ensuring that the teams properly represent Blugold values.

Although gaming is a tight-knit community of like-minded people, there are also sub-cultures who occasionally promote negativity.

Within gaming, the community immediately diverges into two groups, Personal Computer and console gamers. Lightbody and Murphy said they believe PCs are superior to consoles.

Within those, there are specific games. Within the games, there are different characters or play styles seen as superior by their users.

Belittling others is known within the gaming community as toxicity, according to Murphy and Lightbody. Some are unkind toward their fellow gamers, throwing out insults, profanity and slurs.

“It’s unfortunate, but it’s a part of gaming culture,” Lightbody said. “We definitely don’t condone that. There are expectations when you’re in the eSports lab.”

Murphy also emphasized the eSports club’s anti-toxicity policy, saying that they represent Blugold values and he said the club is as inclusive and positive as the rest of UW-Eau Claire is.

The eSports club’s main purpose is to play video games, but Murphy and Lightbody said it brings people together who otherwise may never meet.

“Games like League of Legends are huge in Asian markets,” Murphy said. “I’ve heard from a lot of foreign exchange students that having an eSports team that offers League gives them a really good experience meeting people. That was something I had not initially thought of but has become a big positive.”

Murphy and Lightbody both said that due to the club’s steady growth, they are looking to add two more games in the near future — Counter-Strike: Global Offensive and Tom Clancy’s Rainbow Six Siege.