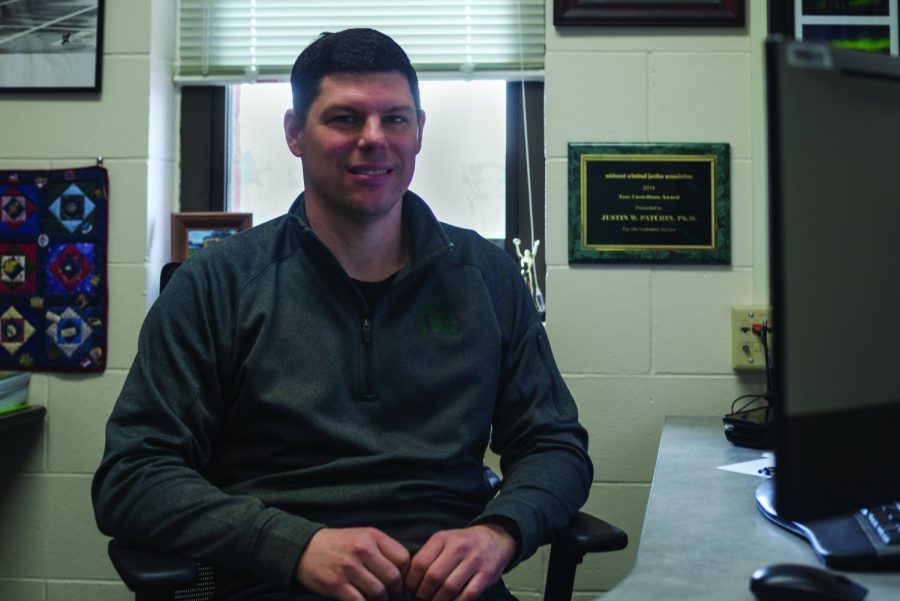 Justin Patchin, an assistant professor of criminal justice at UW-Eau Claire, is the co-director of the Cyberbullying Research Center and has presented at conferences all across the world.

When he started college at UW-Superior, Justin Patchin wanted to be a juvenile probation officer. He was interested in the topic of school bullying, but little did he know he would become one of the leading researchers on cyberbullying.

Patchin,  an assistant professor of criminal justice at UW-Eau Claire and co-director of the Cyberbullying Research Center, has been exploring and examining for nearly two decades how teens use and misuse technology, exploring topics such as cyberbullying, sexting, sexploitation and digital self-harm.

In 2001, when he was in graduate school at Michigan State University, Patchin met Sameer Hinduja. Patchin and Hinduja found they had overlapping interests — Patchin’s interest in bullying and Hinduja’s interest in digital crimes and technology. The two began to think about how young people were using technology.

At the time, there wasn’t really any research on cyberbullying, Patchin said.

“We just started doing it ourselves,” Patchin said. “It was just kind of a side interest for both of us — we didn’t do any graduate work on it, we didn’t do our dissertations on it. We just were curious. It kind of exploded from there, really.”

And that it did.

The two have written several books together and have presented at conferences all across the world.

Their most recent article, “It is Time to Teach Safe Sexting,” was published in the Journal of Adolescent Health earlier this month.

The goal is not to encourage sexting among teens, Patchin said, but rather to protect teens from the negative consequences of sexting.

Not only do Patchin and Hinduja discuss the possibility of school sanctions and exploitation, but also the criminal consequences that come along with underage sexting.

According to Patchin, sexting is the only crime for which a child is treated no differently than an adult, meaning a 14-year-old girl who sends a nude photo of herself to her boyfriend can be charged with creation and distribution of child pornography and can be required to register on the sex offender registry. This particular scenario took place in 2018 and the charges against the 14-year old were later dismissed.

Patchin said the discussion of sexting should be implemented into sexual education classes. However, because Wisconsin’s sex-ed curriculum requires a focus on abstinence, Patchin said implementation might be tricky, but the hope is to minimize the risk of consequences.

“The reality is about 20 percent of high school students are engaging in sexting,” Patchin said, “and so whatever we’ve been doing over the last decade to try to stop them from doing it isn’t working.”

Patchin has also studied other topics, such as digital self-harm. Digital self-harm, Patchin said, is when someone sets up an anonymous profile — on websites like Ask.fm or AfterSchool that are based in anonymity — and bullies themself.

“We had been studying cyberbullying for almost a decade and we hadn’t even thought of that possibility that basically kids would set up fake profiles and bully themselves,” Patchin said.

The two then heard about the 2013 case of Hannah Smith, a 14-year-old from England who committed suicide after being tormented online. After her death, it was revealed the anonymous profiles bullying Smith came from her own computer.

Patchin and Hinduja decided to delve deeper into this to see if this was something which happened regularly.

The survey Patchin and Hinduja conducted revealed about six percent of teens admit to participating in digital self-harm. The survey was conducted in 2017 and is being replicated.

“With the technology constantly changing and new apps and new environments and even new behaviors — it definitely keeps the research fresh,” Patchin said.

Along with research and writing, Patchin teaches criminal justice courses. He said the opportunity UW-Eau Claire has for professors to not only teach, but also to do research and write, makes for a good balance.

Patchin also does research with students on campus.

Elli Becker, a third-year criminal justice and psychology student, has done research with Patchin and had him in class.

Becker received the Blugold Fellowship, a scholarship and collaborative research opportunity awarded to about 20 incoming freshmen at UW-Eau Claire each year.

Through her fellowship, she worked with Patchin on his research, coding survey responses and researching the laws and the language of statutes on cyberbullying.

Most of the research Patchin does is survey-based and he and Hinduja work with middle and high-school students and their parents across the country to gather their responses. Those responses then must be compiled and the data must be entered to gather the statistics.

“He was doing research about cyberbullying,” Becker said, “that is something you don’t think of right away in criminal justice.”

Becker said she has gained a unique perspective of criminology through the research she has done and classes she has taken with Patchin.

Bridget Kelly can be reached at [email protected]