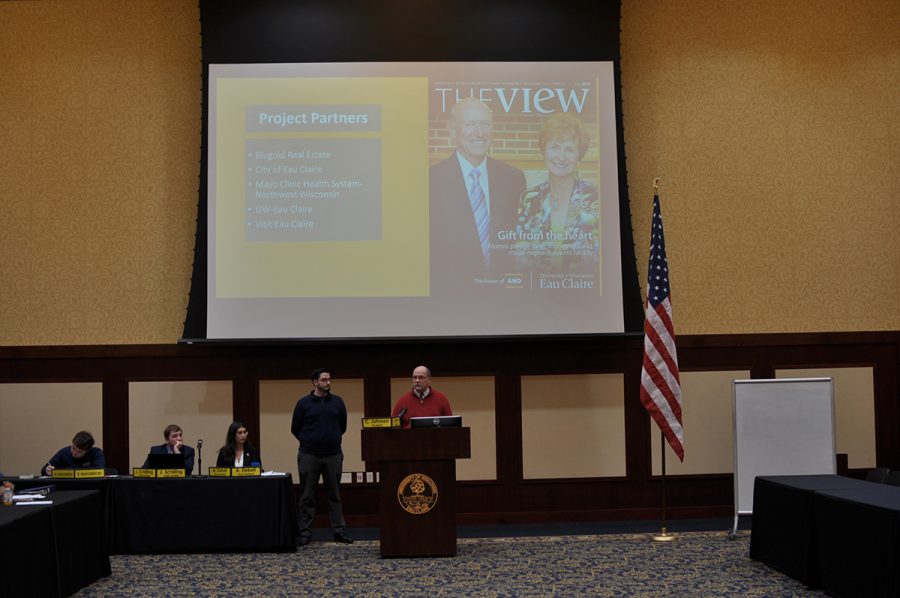 Mike Rindo, assistant chancellor for facilites and university relations, and Jacob Wrasse give a presentation.

Student Senate kicked off its first meeting of the semester Monday, Feb. 10. The main focus of this meeting was the Sonnentag Event and Recreation Complex project that is well underway.

According to the UW-Eau Claire website, the Sonnentag Event and Recreation Complex is expected to meet the athletics, fitness and recreational needs of UW-Eau Claire and the YMCA, along with housing a Mayo Clinic Health System sports medicine and human performance facility.

Mike Rindo, assistant chancellor for facilities and university relations and Jacob Wrasse, a government and community relationships specialist, gave a presentation at the meeting to speak to the senators about updates on project since they last spoke in December.

“We’re really close to the point where we’re getting construction designs, documents and moving forward for this summer,” Wrasse said. “That is especially interesting considering that in December, one of the original project partners, the YMCA, determined that they weren’t going to be able to go forward.”

Wrasse said there also was an emphasis on the updates of potential partners who will work on the project.

“In the time since the YMCA left, the city of Eau Claire and Visit Eau Claire have become partners in the project and that is sort of the update we wanted to give you today,” Wrasse said.

UW-Eau Claire and its partners have announced they expect to begin construction by July 1, 2020, Rindo said.

These partners of the project are in the process of making final decisions on the design, Rindo said and displayed potential floor designs of the complex in the presentation Monday night.

Wrasse went on to talk about how the partnerships that UW-Eau Claire has been fortunate to obtain have come to define its facilities.

“We haven’t had tons of investment from the state,” he said.

Wrasse then displayed all of the partnerships at the meeting to highlight the importance of partnerships because they give UW-Eau Claire students access to numerous facilities and opportunities.

“We’ve looked for creative ways to partner, including with the city owned Hobbs Ice Arena, which is the home of blugold hockey. The university owns Bollinger Recreation fields, 40 acres and that is heavily used by the city for various youth leagues and other events. We have partnered with the YMCA and it has become our tennis center, our tennis team practices over there,” Wrasse said.

Not only have we been given access to sports facilities, but the Pablo center has given students a wide range of opportunities for music students as well, Wrasse said.

“We have seen incredible success in performances at this venue downtown,” Wrasse said. “Students are getting first-hand opportunities to learn and work alongside experts.”

Charlie Johnson, the student body president, talked about his trip to Washington, D.C. with Anna Ziebell, student body vice president and a few other senators and said he got the chance to meet with legislators to discuss the communication campaign.

“Because segregated fees will be used, a referendum will occur this spring, which will be tied in to the student senate election in April,” Johnson said.

An email from Johnson to the student body was sent out on Tuesday, which provided information and led students to a webpage with all the information on the project.

The email read, “I am reaching out now because you will play a pivotal role in the successful completion of the event and recreation center. In April, you will be given the opportunity to take part in a vote on the recreation referendum which will be tied in with the 2020 Student Senate Elections. This project cannot move forward without your support and I will be in touch in the coming months to make sure you have all of the necessary information by start of voting on April 20.”

Aside from the updates on the project, Johnson said they were able to discuss administrative processes that support international students and instructors, funding from health resources as well as providing updates on their partnership with Mayo Clinic during their visit in Washington, D.C.

Updates on the Sonnentag project can be found on their website.