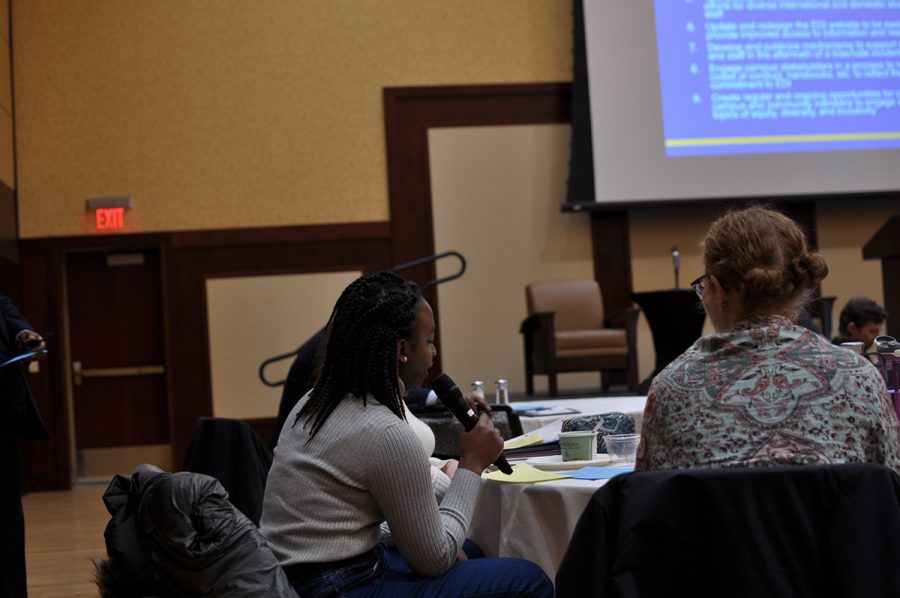 Students discuss their opinions on the Rapid Action Task Force at the Forum on Monday.

This task force was charged with the mission to review the university’s current EDI program, examine the program’s past results and to hear the input of student and faculty sources in order to provide recommendations for a plan to better serve the needs of the campus community.

On Jan. 31, the task force released its final report, in which nine recommendations to improve EDI on campus were outlined.

These nine recommendations include the implementation of restorative justice programming on campus, the expansion and enhancement of EDI training for students and faculty, and the improvement of communication and transparency between students and the university.

On Monday, two informational forums were held in the Ojibwe ballroom of the Davies Student Center to discuss the recommendations outlined in the report.

Each forum — one for students, and one for faculty and staff — was moderated by Warren Anderson, UW-Eau Claire’s vice chancellor of EDI, as of Dec. 16. Information about the report itself was provided by the RATF’s three co-chairs: Jan Larson, chair of the communication and journalism department, Kim Wudi, coach of UW-Eau Claire’s volleyball team and Youssra Bentaalla, a third-year student.

Larson said the nine recommendations were categorized by three underlying themes: accountability, communication and culture. Larson said the development of these themes provided the task force with a framework for what they hoped to accomplish.

“We asked, ‘What could be done quickly?’” Larson said. “‘What could move the needle for improving equity, diversity and inclusivity education on this campus?’”

Larson said students of color are less likely to seek out help after an incident, which resulted in a need for more accessible resources.

Wudi emphasized the importance of healing and accountability, as well as the university’s need to improve its Bias Incident Report process.

Bentaalla discussed the university’s need to take inventory of student safe spaces and open a more productive dialogue between students and faculty.

Anderson said he started his position as vice chancellor of EDI after the task force had already been established, but he was a part of the reporting structure. He said he worked with the team to get early insights, but did not influence the decision making. His role in EDI is more comprehensive, Anderson said.

“We’re not going to fix in a few weeks what environment has been built over the course of years, in some cases, for some individuals,” Anderson said. “It’s challenging in that a lot of the work around this has already sort of begun — had begun prior to me coming — but it’s an opportunity for us to really start to change the conversation so that people really start to see the good things that are happening here at the university.”

Anderson said he came to Eau Claire at a “transformative time” for the university. While he was not here for the racist incidents that occurred last semester, Anderson said it is his hope that he can help direct the healing process.

He said he felt lucky — in some respects — as he began his job at the university knowing that there were already people on campus doing good things to help the university move forward. Anderson said the members of the task force were very dedicated and thorough in their work.

“There’s going to have to be a lot of bridge building,” Anderson said. “Because what we’re talking about is not easy — it is not the fun stuff — I expect that there is going to be some level of resistance to some of the changes that we need to make … But my expectation is that we will have a lot more support to do these things than not …  We can’t do everything right out of the gate. We have to prioritize our resources, both human and capital, to make sure that we do this in the most methodical way to allow for sustainability.”

Anderson said he does not want to waste university and student money on something that would not offer significant return for the students, though he did stress the importance of maintaining expectations.

“I don’t want anyone to think that the racist incidents from last semester are the whole of who we are, because they’re not,” Anderson said. “It happened. We’re doing everything we can to deal with it in the most equitable, accountable way possible. It is going to happen again, as it will at every institution, but our goal is to build a kind of environment that can sustain well beyond that. We want to make sure that, regardless of what happens here in relation to these things, we’re made stronger as an institution because of the way we responded.”

Prior to the release of the RATF’s final report, reactions to the task force itself were mixed.

In an anonymous Qualtrics survey, many people voiced their support and offered suggestions for the task force and its evaluation of EDI on campus. Some people, however, expressed their opposition to the task force. They said the university had infringed on First Amendment rights and promoting leftist views.

During both the forums on Monday, audience members were encouraged to ask questions or voice their opinions.

Kayde Langer, a third-year sociology student whose door was vandalized with a racial slur directed toward Native Americans last September, recommended the university begin its EDI reconfiguration with the second point outlined in the report:

“Encourage a culture of reporting and responding to hate and bias incidents through a variety of measures to improve the Bias Incident Reporting process.”

Langer attributed this suggestion to their experiences with UW-Eau Claire’s Housing and Residence Life, which Langer said continuously discourages students from coming forward with their lack of action.

Other students stressed the importance of focusing on planning for the future, rather than directing too much attention toward projects that already exist. One student suggested the university direct EDI efforts toward minorities as a whole, rather than targeting a handful of individual groups.

Faculty audience members questioned the roles university administration would play in the implementation of the recommendations, as well as what defines a location as a “safe space.”

Anderson said the campus community should expect to receive a “call to action” sometime in the next few weeks as he looks to form a long-term team dedicated to implementing the nine suggestions made by the RATF.

Fuerstenberg can be reached at [email protected].