Former and current UWEC staff speak out against Albert Colom 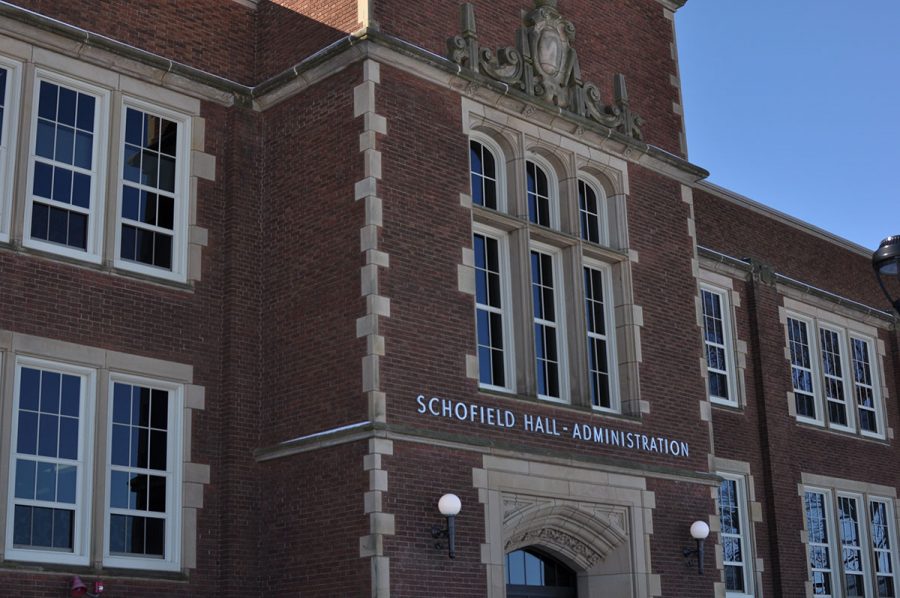 At least eight former and current UW-Eau Claire employees say the behavior of Albert Colom, vice chancellor of enrollment management, prompted them to either quit the university completely or shift roles.

The following is part of an ongoing story. Read the original story here.

At least eight former and current UW-Eau Claire employees say the adverse behavior of Albert Colom, vice chancellor of enrollment management, prompted them to either quit the university completely or shift roles.

The employees and their previous positions are:

Two additional employees under Colom’s management who left the university declined to share the reason for their departure. They are Danielle Widmer, former assistant director of admissions, and Katie Weichelt, former First Year Experience program coordinator.

Additionally, six employees who left the university after Colom’s arrival have something else in common: Fisher, Kretz, Pearson, Nesja, Quamme and Widmer are all UW-Eau Claire alums.

The Spectator contacted Colom for comment via phone and email. He did not respond. Reporters waited outside his office on Friday, Feb. 14, in an attempt to schedule an interview. Colom left his office via an alternate exit and had his program assistant refer reporters to Mike Rindo, assistant chancellor for facilities and university relations.

“As Chancellor Schmidt said at the University Senate meeting, the university takes these kinds of complaints seriously,” Rindo said. “And when complaints come forward — whether it’s regarding a faculty member, staff, administrator (or) student employee — we have processes and procedures in place to be able to ensure that they are thoroughly investigated and that the process that we use is fair, consistent and really provides due process for the individuals involved.”

Rindo was referring to a Feb. 11 University Senate meeting where faculty raised concerns about Colom and Schmidt revealed plans for an investigation of a formal complaint. University Senate comprises faculty and academic staff.

Swenson-Holzinger, the former associate director of advising, filed the complaint against Colom. Her complaint is an echo of other testimonies from former UW-Eau Claire employees.

Director of admissions and four others leave UW-Eau Claire

On Jan. 11, 2019, Heather Kretz, then director of admissions, handed her letter of resignation to Colom. The following Monday, three other employees followed suit, resigning in tandem.

A fourth person, Danielle Widmer, assistant director of admissions and a UW-Eau Claire graduate, left at the same time. She declined to say why she quit.

Kretz’s first individual meeting with Colom was on Aug. 28, 2018. Kretz said she was “stunned” when Colom “angrily” questioned her qualifications during their discussion, calling her admissions experience “worthless.”

“A few weeks in,” Kretz wrote in her statement, “I started to get the feeling he was frustrated that he couldn’t fire me — due to both having no cause and the ripple effect that it would have across campus. I felt he was trying to tear me down and force me out; however, I just kept on doing excellent work and tried to survive it.”

After the interaction, Kretz said she shared concerns about Colom’s “alarming and questionable” behavior with Chancellor James Schmidt in a meeting on Sept. 12, 2018. She said Schmidt assured her she was qualified in her position, and she left feeling “assured of (her) role.” Kretz said she started working with “returned enthusiasm” as Colom’s contract began on Oct. 1, 2018. She said she convinced herself Colom was “just a tough boss.”

But in the months that followed, Kretz said, Colom made demoralizing comments, insults and contradictory remarks about her work performance.

“I thought that I would prove to be a valued asset to (Colom),” Kretz wrote. “And so I kept his treatment of me fairly quiet, and I tried to persist.”

Kretz said she and Schmidt met again to discuss Colom’s actions on Jan. 4, 2019. Kretz said she gave Schmidt four written statements from people at the University of North Florida recounting interactions with Colom that “matched the awful experience I had with Albert the past four months.” She wrote in her statement that Schmidt told her he wouldn’t read them and said he “needed to stand by his person.”

The Spectator contacted Schmidt for an interview but was referred to Rindo, who said he can’t comment on meetings he didn’t attend.

Fisher, a UW-Eau Claire graduate who worked in admissions as a student and served as president of Campus Ambassadors, said in a phone interview she left the university in part because of ethical concerns. Read more about Fisher’s decision to leave her position in her statement.

Lee said she witnessed Colom interact with Kretz in a senior staff meeting on Nov. 6, 2018.

“Throughout this 2+ hour long meeting,” Lee wrote in her statement, “(Vice Chancellor) Colom would continually interrupt Heather Kretz as she was speaking, ask for various pieces of data and then be dismissive when Heather was able to provide it, and kept referring to Heather Kretz as ‘miss bossy pants.’”

Lee had almost nine years of experience when she stepped away from UW-Eau Claire.

In the meantime, Pearson said she gathered written statements from people who worked with Colom at the UNF, where he’d served as associate vice president before accepting the job at UW-Eau Claire.

“As I read them I came to understand that what was happening at UW-Eau Claire was not unique,” Pearson wrote in her statement, “it was a pattern of behavior that had happened at Mr. Colom’s past institutions. It wasn’t one person, it was countless individuals across departments. These were not low-performing individuals — they were rising professionals who were passionate about education and loved their jobs.”

Pearson had 18 years of experience when she left the university and had earned her master’s in education at UW-Eau Claire.

In a Jan. 14, 2019 email, Schmidt shared news of the five resignations with faculty, staff and student leaders. He wrote to thank the women for their service and spoke of the “significant progress” in the Division of Enrollment Management under Colom’s supervision.

Lee said she documented her experience with Colom in her exit survey, which human resources collected via eform. She said the university never followed up on their responses.

Swenson-Holzinger, then associate director of advising, began reporting to Colom last summer. She said Colom spoke to her “with a pattern of disdain and treated (me) as if I was not competent.” These conversations,  Swenson-Holzinger said, were often held behind closed doors.

“He regularly disparaged other female leaders on campus in meetings with me … I have never heard him critique, in any way, a single male leader on campus,” Swenson-Holzinger said in her complaint to the university.

“Albert is a symptom of a problem,” Swenson-Holzinger told the Spectator. She said she wouldn’t be willing to return to UW-Eau Claire under Schmidt’s leadership.

Mark Quamme, former academic advisor, worked directly under Swenson-Holzinger. He resigned in early October and his last day was Oct. 18. Quamme, also a UW-Eau Claire grad who worked in admissions while a student, said his decision to leave the university was expedited because of the culture Colom created.

“I just didn’t feel right, really, working in the division I was in anymore,” Quamme said in a phone interview. “I didn’t feel that I was working for someone that I ethically agreed with, and I just felt kind of a yucky feeling about the whole situation.”

“He was one of the main reasons I packed up and moved to a different UW,” said Nesja, also a UW-Eau Claire alum.

Ryan Weichelt, First Year Experience director and associate professor of geography and anthropology, said he met with Albert Colom three times to discuss the FYE program. These meetings were between Nov. 29, 2018 and Aug. 7, 2019. Weichelt described these meetings as “cordial.”

“A copy of this new plan was located and Albert Colom was confronted,” Weichelt said. “He accused various people of ‘planting spies.’”

Weichelt said he will leave his role  as director of FYE in May 2020 after three years in the position. He’ll still be an associate professor of geography and anthropology.

“More than 50 percent of my decision to walk away was my inability to work with enrollment management,” Weichelt said, “because they would not communicate with me at all.”

This is a developing story. A story later this week will examine Colom’s interactions with staff from previous institutions.