A man of many talents

David Jones not only teaches English on campus, but runs a music venue 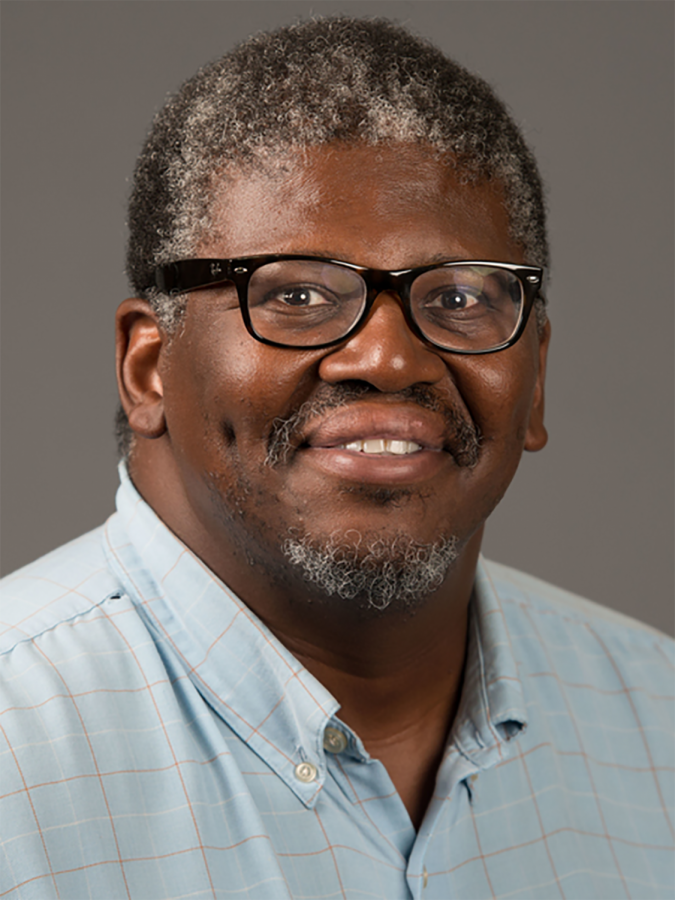 David Jones, an English and honors education professor, said he likes the flexibility of English to work with.

David Jones, UW-Eau Claire English and honors education professor, has been teaching at the university since 2000. Jones said he took a job at UW-Eau Claire the same year he graduated from the University of Minnesota with a Ph.D.

“At the interview, I found the fellow faculty to be very personable and genuine and my adviser mentioned that Dr. Tess Onwueme, a professor and internationally known playwright, was also part of the staff,” Jones said. “So those factors were all important for my coming here.”

Jones’ primary field of teaching is African American literature where he works with literary texts, film and cultural contexts. Jones said he likes teaching English because of the flexibility.

“I became interested in African American literature because I liked the blend of history, sociological approaches and literary approaches that are a part of the field,” Jones said. “I also enjoy creative nonfiction as a type of expression within English and works of creative nonfiction were important during my primary period of the 1960s and 1970s Black Arts Movement. I was also very taken by the work of black feminist writers during this period.”

Ann Rupnow, UW-Eau Claire management and marketing instructor and coordinator, who worked with Jones when co-leading the effort to create an EDI plan toward achieving certain campus benchmarks, said Jones is a wonderful colleague to work with. She said she was able to learn so much from him.

“He is driven to accomplish positive change, while being kind and easy to work with,” Rupnow said. “I’ve learned so much from him about racial issues and approaches for change in terms of racism. . . I think many do not realize all the subtle and not-so-subtle ways he has positively worked to bring Eau Claire further along on our journey toward inclusiveness.”

Jones said he has not been as involved with Black History Month celebrations recently but in the past was involved with the Martin Luther King Jr. Day celebration. Jones mentioned a program at UW-Stout that he and Selika Ducksworth-Lawton, professor of history and women’s, gender and sexuality studies, will be doing on W.E.B. DuBois this month.

Ducksworth-Lawton said the program is on W.E.B. DuBois’ Souls of Black Folk.

“I will connect DuBois to the history and modern civil rights,” Ducksworth-Lawton said. “Dr. Jones will put DuBois in the context of cultural influences and talk about the range of things DuBois still influences in pop and mainstream culture today.”

Jones said his publications vary between popular music, 20th century cultural studies and African American literature. He said at UW-Eau Claire it is helpful to teach from areas he does research on.

“I sometimes use teaching as an opportunity to explore new research areas, which I did for recent courses such as Politics and Culture in the Age of Trump and McDonaldization and Social Identity,” Jones said.

Rupnow said Jones is a talented and influential person on campus and in the community, referring to his music.

“I have heard David perform — once in Stockholm, WI, when I was there with family — and several times in Eau Claire,” Rupnow said. “David brings people together in many ways, and music is perhaps the way he enjoys most, although I have not asked him that question. I’m honored to know and work with him!” Rupnow said.

Jones said he has been pursuing music since his late teens.

“My first band (The Earplugs) was formed when I was a junior in college, and I have been pretty consistent since then in pursuing music,” Jones said.

Originally, Jones said he wanted to put some of his poetry to music when he was a first and second-year college student. He said he continued to do songwriting and started playing in bands frequently when he moved to Minneapolis in 1989.

Ducksworth-Lawton said Jones has played with her band, Proffunk, and has done gigs with her.

“I have sung with him at a few open mikes,” Ducksworth-Lawton said. “He has played Juneteenth for me on occasions. I value his skill, talent and musical taste in my own songwriting. He is doing incredible things.”

Jones said he’s currently working on an independent music venue, Davey J’s Garage, trying to see if he can make it work. He said it’s a small venue in downtown Eau Claire.

“I really like the interaction with other musicians, I like the challenge of growing musically, and it is fun to pull into a new location and see if you can touch people in the audience through your music,” Jones said.

Other than his passions for his work on campus, publications and music, Jones said he loves his family and playing basketball, although he is nearing an end to playing it competitively.

“My three children and my wife Catherine are important to me, and I also enjoy reading about politics and supporting local elected officials,” Jones said.

The opportunity to continue learning and working with students is what Jones said is one of his favorite things about UW-Eau Claire. He said he also enjoys his colleagues and the city of Eau Claire.

“I have wonderful colleagues and a lot of appreciation from my colleagues on the work that I do,” Jones said. “I also enjoy the quality of life of being able to walk to work, of living near downtown and beautiful parks and having a thriving music scene to enjoy.”