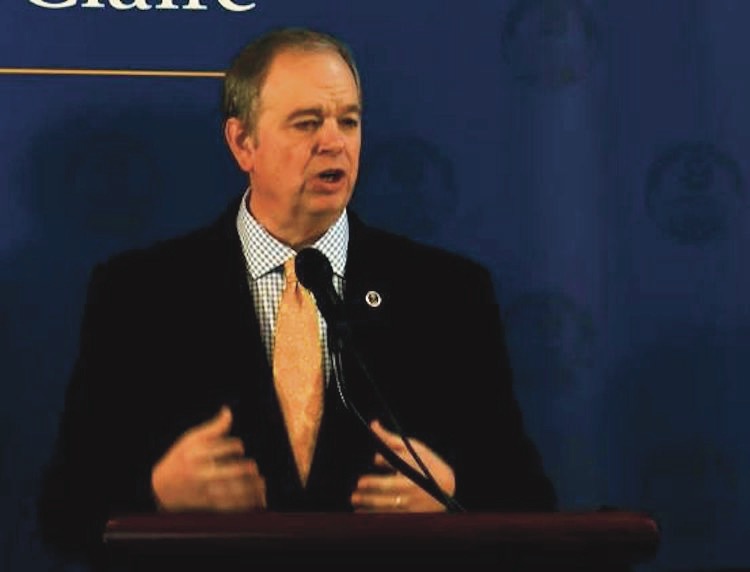 Chancellor James Schmidt held a press conference on Monday to discuss the formation of the new Rapid Task Force and its members.

James Schmidt, the UW-Eau Claire chancellor, sent out an email Monday about the steps taken in response to two racist incidents that occurred this semester: graffiti on Kayde Langer’s door and the photo of racist messages via Snapchat, sent by players on the UW-Eau Claire football team.

These two incidents, Schmidt said, have drawn attention to the difficulties that people of color face here at our predominantly white university.

Although Schmidt said he has seen and encouraged”changes in the way minorities are treated, there’s a lot to do, and it requires Blugolds to work together.

“It’s clear that we must rapidly improve the way our organization communicates about these issues and assess the circumstances that have led us here,” Schmidt said in an email to UW-Eau Claire students, faculty and staff on Mnday. “This is a crucial step as we pursue the important goals we have established for advancing equity, diversity and inclusion (EDI) at UW-Eau Claire.”

This plan for immediate action has two prongs: the first is the Rapid Action Task Force; the second is to have a third party conduct a review of the sports programs here at UW-Eau Claire.

“The task force will identify specific, immediate actions that can be implemented by the end of the current academic year,” Schmidt said. “(It) will provide its recommendations to me by Jan. 31.”

This means it will be working during the Christmas break to come up with a plan of action, Schmidt said.

The task force has 16 members, comprising faculty, staff and students, Schmidt said, and they met with Schmidt before the email was sent out.

The athletic programs review came at the request of Dan Schumacher, who is the director of athletics, Schmidt said.

“It is the right thing to do, and we are already in the process of identifying possible individuals or organizations with the qualifications necessary to conduct the review,” the email stated.

Schmidt said the third party will give its report directly to him.

In addition to this two-step approach, Warren Anderson, who will begin a new position as the EDI and Student Affairs Vice Chancellor on Dec. 16, will help with devising and implementing a long-term plan, Schmidt said.

Despite the coaches being “shocked and saddened” by the incident with the football team, Schmidt said he was inspired by the response that he’s seen.

“We will move forward together, address any roadblocks that may be in our way and ensure our entire campus is focused and committed to our EDI goals,” Schmidt said.