Connecting with compassion for the greater good

Xiuhtezcatl Martinez, a 19-year-old activist, spoke about climate action and how it affects indigenous and marginalized groups as part of The Forum Series 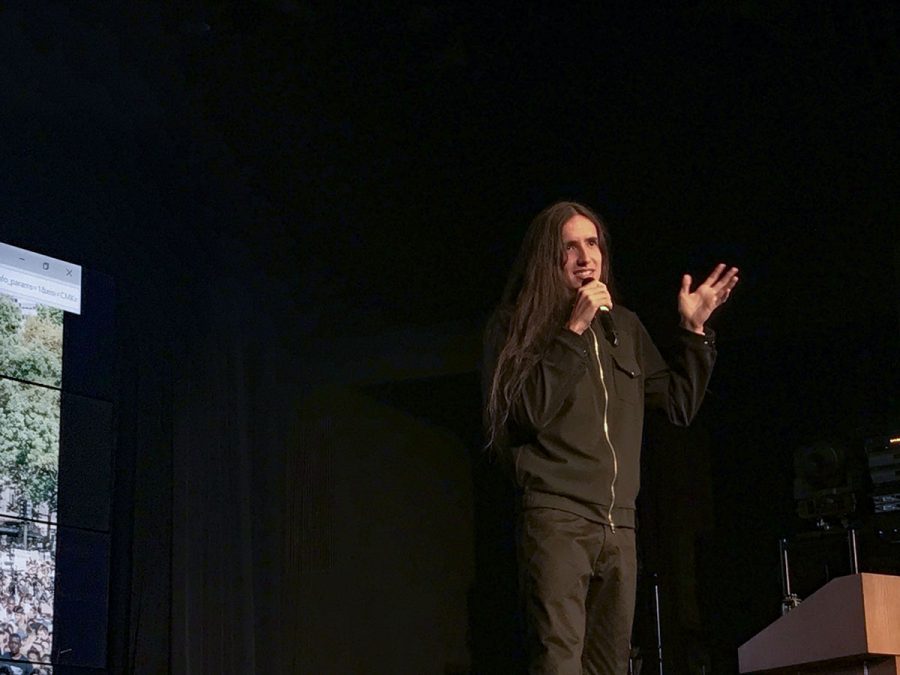 Xiuhtezcatl Martinez spoke on the UW-Eau Claire campus on Dec. 10 about climate activism.

A youth climate activist, music artist and Earth Guardians youth director is calling on his generation to take the steps necessary to create progress in the ongoing issue of climate change.

“The climate crisis is not just this environmental, progressive, liberal issue… (or) about taxing the rich and building more solar panels,” Xiuhtezcatl Martinez said. “It’s about challenging the flaws in our humanity that have gotten us to live in a way that is destructive fundamentally to the resources that give us life every single day.”

Martinez spoke about climate change and how it affects different communities of people and how to communicate climate action messages effectively as a part of The Forum Series last night in the Schofield Auditorium.

One reason that climate activism has failed to push enough to create large change, Martinez said, is because the way stories have been told has failed to inspire the world. One of the pillars that prevents others from realizing the climate crisis is that so many people view climate change as an environmental issue.

Martinez said he would see images of people impacted by floods and storms when he was young. However, it wasn’t until he experienced these disasters near his home through the California wildfires that he said he truly understood the climate crisis.

Additionally, Martinez talked about the importance of climate action to his culture as someone with indigenous Mexica heritage.

The threat from industries like the ones involved with the Dakota Access Pipeline at Standing Rock are a greater threat for indigenous and marginalized communities than those communities’ white allies, Martinez said. Industries like the fossil fuel industry take away sacred land and clean water.

Martinez talked about one school he spoke at in Minnesota that he said was “super conservative.” Despite the school’s initial, hyper-critical reception of him, Martinez said after he performed a song, the crowd was a lot more receptive to his message.

Kayde Langer, a third-year sociology student who uses gender-neutral pronouns, attended The Forum. They said they knew of Martinez before The Forum, since most Native communities “kind of fangirl over him.” They first learned of Martinez from social media and through listening to his music.

“How he was able to connect to a more conservative group was so important,” Langer said. “Because just how I carry myself, I wouldn’t be able to do that. Especially having to be able to present to such a different crowd that wouldn’t normally be susceptible to his message.”

The difference that art and music made at that point was really powerful, Martinez said. After his speech, students came up to him and explained that they had never even heard of some of the topics he talked to the school about, like climate change.

“The way that things are changing so rapidly, the way that this crisis is evolving so swiftly, poses a massive amount of threat to our very short-term future that many of us in this room or many of us students are still going to be living and experiencing,” Martinez said.