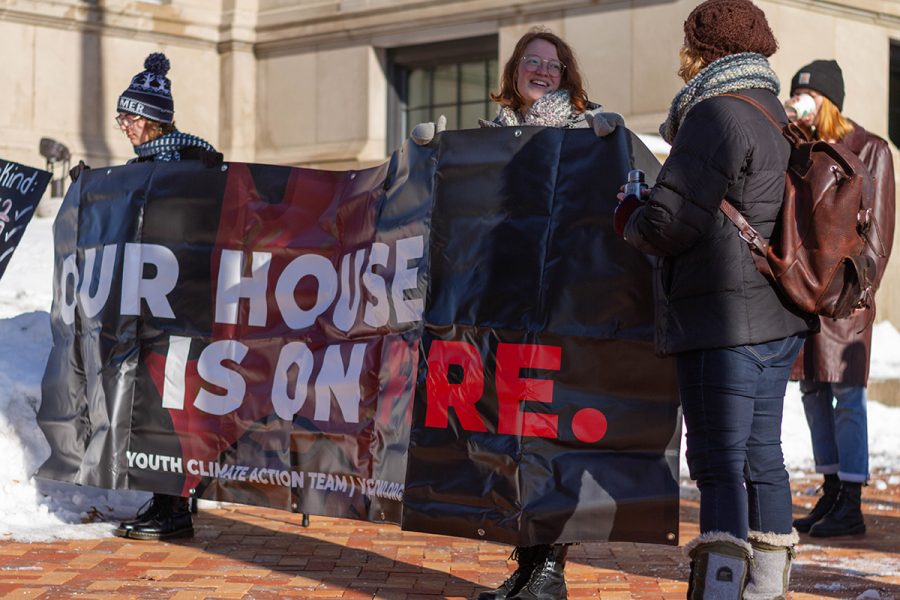 Students and community members met on Friday, Dec. 6 at City Hall to protest against climate change.

“What will happen in the future of our children?” one protester asked.

From 10 a.m. to 1 p.m. on Friday, Dec. 6, a climate strike was held outside of the Eau Claire City Hall, hosted by Maddie Loeffler, a second-year environmental geography student.

Loeffler, having experience with helping in the climate strike held on Sept. 20, said she was always interested in environmental activism and saw a need for it in Eau Claire.

“With enough people, we’ll do this again,” Loeffler said. “Anyone who wants to help, can.”

Jeremy Gragert, a member of the city council in District 3, which covers the 3rd, 17th, 20th, 21st, 24th, 30th, 57th, 63th, 67th and 72nd wards, said the city council is working on various plans for the city to be more sustainable and environmentally friendly.

The city, teaming up with Xcel Energy, plans to prioritize their budget to invest millions into renewable energy, such as relying more on solar energy to have a more sustainable way of living, Gragert said.

Gragert said the city and Xcel Energy have created a goal in March 2018 to reach 100 percent  renewable energy and carbon neutrality by 2050.

“We have the goal,” Gragert said. “Now it’s just a matter of following our commitment.” “Our youth could make it happen sooner, as the plan isn’t as ambitious as it could be — nothing wrong with achieving a goal early.”

College students weren’t the only age demographic that attended the strike — but high schoolers and children attended as well.

“It is important that the youth are active, as they are the future of our planet,” Gragert said.

Lean said she has been an activist for climate change ever since she started high school where she learned a lot more about what was going on in the world.

“Ever since childhood I was always outside and camping,” Lean said. “When I learned what was going on in the world, I couldn’t just do nothing.”

Leonardson said her activism stems from the devastation happening all around the world due to climate change.

“It’s frustrating how climate change is a political issue,” Leonardson said. “People are ignorant and comfortable as things are, picking and choosing the statistics they want to believe.”

Nathan Stremcha, a resident of Eau Claire, said his upbringing in a rural setting is what caused him to be an activist for the environment.

“I’ve spoken to my dad and learned a lot about the issue,” Stremcha said. “I feel frustrated with the whole situation.”

Jen Monroe, another Eau Claire local who moved here from Waukesha in March, attended the strike with her young daughter, June.

Monroe said she is a part of an environmental task force that is currently working on planning a community recycling forum.

Brook Leobo, a studio art student, said she attended the event to surround herself with others who felt the same about the climate issue.

“A lot of people don’t care,” Leobo said. “They should care. It’s our planet.”