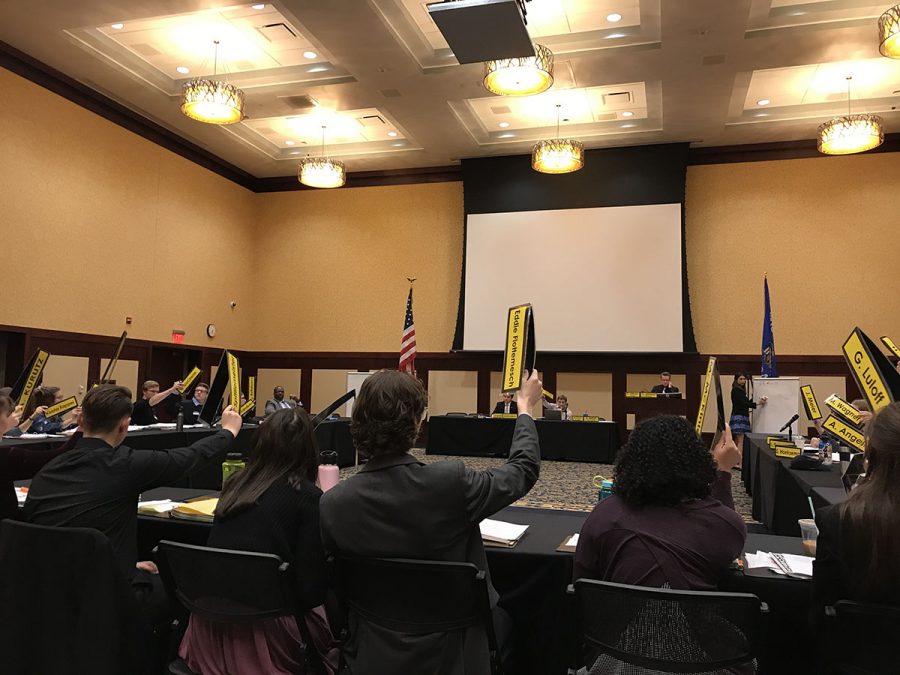 The four pieces of legislation are as follows:

Student Senate unanimously passed the resolution in condemnation of racist discourse among select members of the Blugold football team.

Senator Stephanie Hoeksema, the director of the Equity in Student Matters Commission, presented the resolution, which “condemns to the highest possible extent the racist discourse based in an incitement of violence, as well as any additional, past or present, forms of oppression,” “calls upon its administration to demonstrate exemplary behavior and not follow the trends of other universities who have failed to hold students accountable for bias incidents” and “implores its administration to find a penalty following the investigation that accurately and proportionally reflects the infraction committed against the student-athlete handbook and Blugold code of conduct; and understand that allowing the perpetrators back into student spaces will affect those who have been influenced by this incident,” according to the resolution.

“This university is not safe for students of color, period,” Kayde Langer, an on-campus senator, said.

Langer said this fact should bother other senators as well.

Hoeksema said she wanted to highlight how the players represent the university as student athletes.

She also said the Chippewa Valley has an active chapter of the Klu Klux Klan, so it plays into how the Snapchat conversation is not a joke and is reflective of real experiences of people.

“The climate on this campus is one of divisiveness and discrimination,”Jaclyn Buttafuoco, an off-campus senator, said.

She said she wanted to remind other senators of the privilege they have in their positions representing other students.

63-R-17 – In Support of the Computer Science Department

Senator Travis DuChene, the director of the Academic Affairs Commission, presented the resolution, which “supports the students and faculty of the Computer Science department,” “calls upon the UW-Eau Claire administration to work with the Computer Science Task Force to develop solutions to the issues currently faced by the department” and “calls upon the UW-Eau Claire administration to hire more CS faculty for the Fall of 2020 and to implement emergency hires for the Spring of 2020,” according to the resolution.

DuChene said many students have considered transferring to a different school as a result of the situation in the computer science department, so this is an important step in retention.

The resolution had previously passed unanimously in the AAC and in the Computer Science Task Force.

Many of the “be it resolved” statements in the resolution came directly from students in the forum discussions, DuChene said.

DuChene said communication at the beginning of the process was challenging.

“I had to go around asking the administrators myself,” DuChene said. “Not a lot of the CS faculty actually knew what was happening, and they were having difficulties contacting upper administration and actually receiving plans and information from the administration.”

He said it wasn’t until after the first AAC forum that they reached out to the provost and the dean about the situation that lines of communication were established. Then, they began receiving more information, he said.

The current plan and plans for the future include:

Right now, DuChene said they are slotted for six emergency hires. They have three that have been reached out to, DuChene said.

DuChene said right now some of the emergency hires will be overload staff, or staff members who already currently work at UW-Eau Claire. DuChene said most of the faculty will be coming from LTS because many faculty members there have a degree in computer science.

“This resolution, I think, is really important for us to pass up as we do represent the student body,” Grace Luloff, an on-campus senator, said. “It is important to show that we hear students, we hear their struggles and we hear that they want change.”

DuChene said there is no guarantee that anything will happen. But he said 25 students each year who are a part of the CS program are part of a one-to-one exchange program, and, if the CS program fails or the quality of education decreases, these students will lose their visas.

Lauren Becker, the director of the Student Office of Sustainability, said it is important to observe other departments for what may be “falling through the cracks.”

“I find that this bill would be extremely helpful in effectively maximizing the use of student dollars,” Stoutenberg said.

“The finance commission has really done their due diligence regarding this process,” Becker said. “I appreciate the work that they do.”

As a part of the Student Senate meeting, Jay Dobson, the police chief, gave a presentation on updates from the UW-Eau Claire Police Department.

Drug incidents are more common, Dobson said, namely in the residence halls. There have been 53 incidents this semester so far — involving mainly marijuana, Dobson said.

They have issued 22 citations for the public intoxication order thus far, Dobson said.

Dobson also said incidents of mental health and people in crisis are on the rise. To date, police have responded to 19 incidents, Dobson said. Many of them are wellness checks.

Dobson said he wanted to be a part of the silent rally on campus today.

“Quite frankly, police in general, there is a rising distrust — sometimes even a dislike — of law enforcement, and I’d like people to understand who we are,” Dobson said. “However, as I mentioned before, I didn’t want my uniform to be a distraction. And to me, that’s sad.”

The legislations 63-B-7 – Forming the Blu Managerial Ad Hoc Committee and 63-B-5 – Adopting the New Student Senate Logo will be discussed at the next Student Senate meeting.