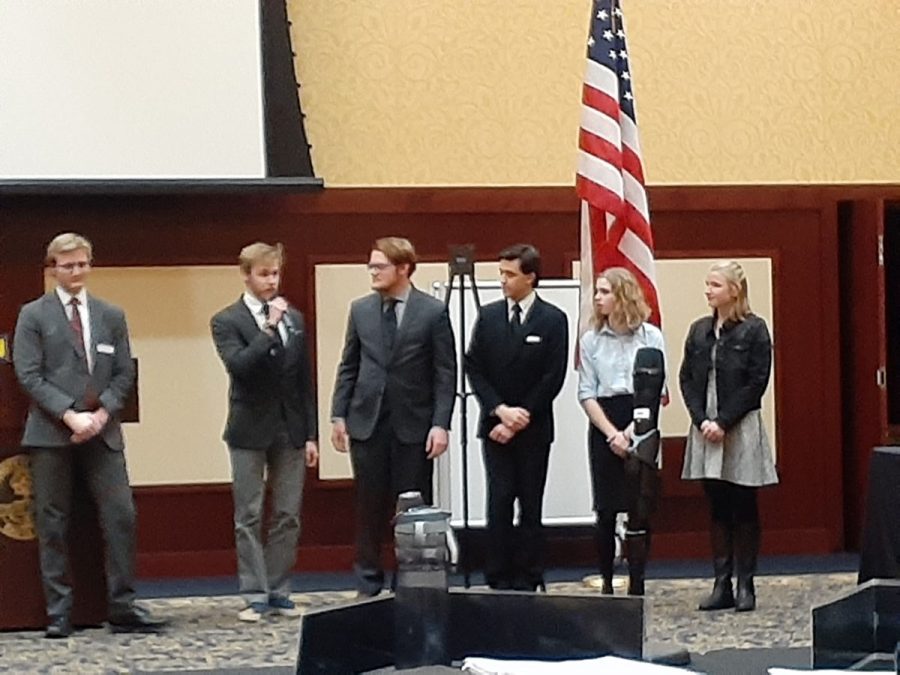 When Davies Student Center was under construction, the original plan was to have a second-floor skyway from the Davies Center to McIntyre Library, Annie Titus, a fifth-year English rhetorics of science, technology and culture student, said during Student Senate’s open forum on Monday.

However, the plan was nixed, and now those using wheelchairs or with other mobility restrictions are required to go all the way around Schofield Hall to get into McIntyre Library, Titus said.

Titus said there are many ways equity on the UW-Eau Claire campus can be improved.

“I’m not married to a specific plan or idea,” Titus said, “But what can we do to make this campus more friendly to others? And how do we make it obvious to visitors (so) that they immediately feel welcome?”

Next up on the open forum were Travis DuChene, a third-year broadfield social studies student and member of Student Senate, and a group of computer science students.

The group comprised DuChene and Elijah Delp, Alexis Lappe, Elena Olsen, Sullivan Prellwitz and Brendan Zember, who are all computer science students (with the exception of DuChene).

They said the meeting on Friday discussing the computer science courses currently available, “left us with very little answers.”

The students of the UW-Eau Claire Computer Science Task Force Committee have been “charged with improving the condition of the computer science program at the University of Wisconsin- Eau Claire,” their charge said.

The five areas the task force focuses on are as follows:

“Creating and maintaining open lines of communication between administration, faculty and students;
Developing a plan that creates an environment that will retain and attract current and future Computer Science faculty;
Developing a plan which ensures the timely graduation and quality of education for current Computer Science majors and minors;
Creating a one-year plan to ensure the short-term survival of the computer science department, and;
Recommending a five-year plan to improve the quality of education and maintainability of the computer science department.”

During the forum, DuChene said he doesn’t think the major will be removed from the UW-Eau Claire curriculum; his concern is the quality of education the students in that field will receive, due to large class size, an insufficient number of professors and long wait lists for the classes.

A resolution is coming next week that Senate will be able to vote on, DuChene said.

After the open forum concluded, Senator Joe Murphy, a third-year information sciences student, discussed a resolution in support of Duo, or of Two-Factor Authentication, as he amended to change the name.

The two-factor authentication is a tool the university and Learning and Technology Services use to decrease the likelihood that someone would be able to gain unauthorized access to student accounts, such as email, CampS and Canvas.

Murphy said that 40 percent of first-year students have the two-factor authentication, and of all the students enrolled, only two have had their accounts compromised.

The main requirement of such a system is that students are sent an access code and are required to input the code in order to log in. For some, that code is sent via text. For students who have a phone or do not want to set it up for such a purpose, there are “tokens,” which DuChene described as similar to key fobs, which can access the code.

In addition to the token, the LTS help desk is also able to generate codes and give them to students in person or over the phone, DuChene said.

Murphy, who is also the director of the Information Technology Commission, said that about 50 percent of those on ITC also work at LTS, and the ITC’s discussion was unanimously positive in favor of the two-factor authentication.

Despite the support of ITC and LTS, opinions in the Senate were divided. There was discussion over typos, polling students and the professionalism of those on Senate.

Numerous bills were also proposed, with the intent of having Senate vote on them in the coming weeks. The bills included moving up the deadline that committees must report their plans for funding from June to March and the new Senate logo.