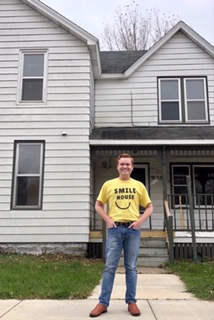 Joe Luginbill of the Luginbill Children’s Foundation stands in front of the Smile House, which he said will hopefully open in 2020.

When Joe Luginbill of the Luginbill Children’s Foundation was a caseworker in Eau Claire, he said there were several young people aging out of foster care on his caseload who expressed concerns for their future.

He then realized that a social safety net did not exist for young individuals who were no longer eligible to be in the foster care system, he said.

“I felt it was very important to have a transitional living program in Eau Claire for this specific population to prevent homelessness and help young people acquire the skills and support necessary to live a successful and productive life,” Luginbill said.

That’s when Luginbill said he began the Smile House project — three years ago.

The Smile House is a property in the 400 block of Vine Street in Eau Claire, which Luginbill said will serve as a place for adults between 18 and 24 years old who were previously in foster care.

He said the house includes four apartment rooms, a shared living space, dining room, kitchen, an upstairs space for an office and living room and a large backyard, and will hopefully open in 2020.

A staff member or volunteer from the Luginbill Children’s Foundation will also always be at the Smile House to provide 24/7 coverage at the house, Luginbill said.

Luginbill said the property is located along a bus route, near a bus stop and in a neighborhood where area residents “have been supportive and kind.”

Strunk said everyone involved in this project shares the same vision for it, which has allowed all of them to connect.

“Everyone in this project has come from a place of understanding,” Strunk said, “a place from being in the trenches.”

As someone who was an at-risk youth, Strunk said her morals and values aligned with the purpose of this project. She said it’s important that these kids have a place where they can go and flourish.

Luginbill said he came up with the name “Smile House” after watching a documentary about Mother Teresa and hearing her quote, “Peace begins with a smile.”

Smile, Luginbill said, serves as an acronym for Support system, Mentoring, Independent Living and Education, which are the services the Luginbill Children’s Foundation will provide and reference through this project.

“I first wrote the original acronym on a napkin and will now frame it in the entrance of the house,” Luginbill said. “It is such a special feeling to see this dream become a reality thanks to the support of so many people.”

Luginbill and Strunk said this project is important to the Eau Claire area because there are currently no transitional living programs for young adults who age out of foster care in Eau Claire.

“We’re the (ninth-largest city) in the state,” Strunk said, “and it’s crazy we don’t have something like this.”

Strunk said she has been creating crews of volunteers to ensure that 24/7 work is being done on the project, and she said they are still looking for volunteers.