“A force of solidarity” 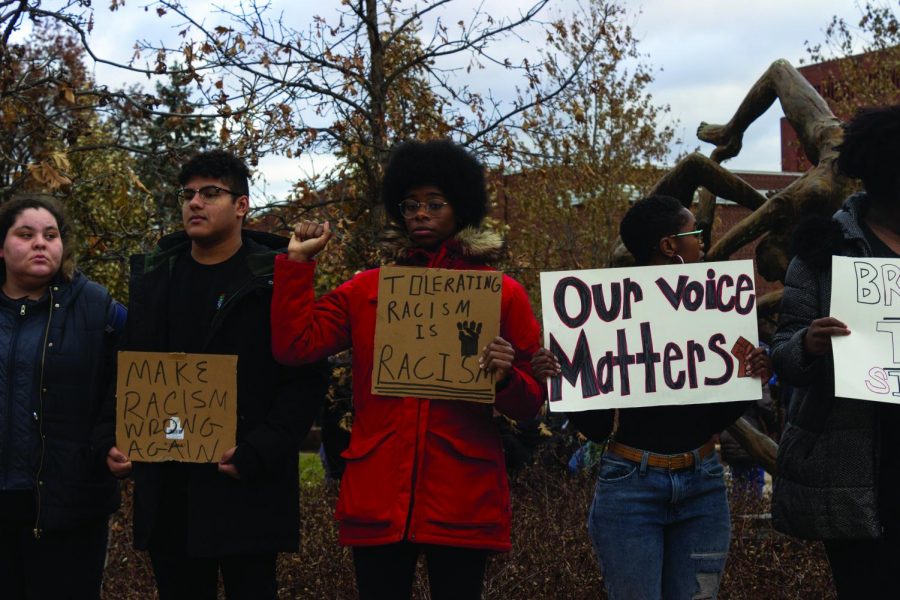 Protesters stood for an hour of silent protest, with members of Black Male Empowerment sitting in the middle circle.

“Tolerating racism is racism,” “Solidarity is power,” “End white supremacy” and “Images matter, we matter” were some of the phrases on student protesters’ signs at the “Walkout in Support of BME and POC on Campus” event early this afternoon.

Hundreds of students gathered in silence at the circle outside of Schofield Hall, with many donning black clothing and carrying signs.

An image was posted in the UWEC Solidarity with People of Color on Campus Facebook page that instructed organizers and members of Black Male Empowerment to stand in the inner circle with other members of the protest surrounding them.

Select faculty members chose to stand outside to be a buffer between the student protestors and potential disruptions. Faculty members also held their phone cameras at the ready in case of disturbances by oppositional students.

At the beginning of the event, Jalen Thomas, the vice president of BME, read the list of demands that they would present to Chancellor James Schmidt.

The demands are listed as follows, according to a post in the UWEC Solidarity with People of Color on Campus Facebook page:

Implement educational sanctions, such as EDI training, as a mandatory part of any series of sanctions.
There exists a culture of racism and bias in the athletic department. Investigate these allegations for removal from athletic participation for all involved students and coaches.
Provide institutional transparency and better lines of communication to the students and staff.

More transparency and direct communication from the university with regular updates about the number and nature of BIRT reports, especially incidents that affect the safety of other students.
Students must receive bi-weekly updates from the chancellor about the administration’s progress in meeting any BIRTs that have been submitted.

The institution must provide more substantive EDI training for faculty, staff and students including athletics across the university.
Students want a university-wide, required course like ES 385 — Social Foundations: Human Relations — to comprehensively weave EDI initiatives into the curriculum.
Hold all LE/CD3 courses accountable for outcomes of understanding the power and privilege within and among race, class, gender, sexual orientation, colonization and other divisive social hierarchies.

Hire, retain and continuously support faculty and staff of color.

Hire more advisors and counselors of minority backgrounds and allow students to select the mentor of their choice.

The university agrees that students who participate in the walkout and further civil actions will not face consequences or sanctions.

Upon the reading of BME’s demands for the chancellor, students remained silent and slowly marched into Schofield Hall with BME members leading the way. The line of students weaved from the Chancellor’s office through the third floor’s halls, down the stairwell and out of the building.

Students continued their silence as they made demands to the chancellor, being careful not to block any passageways. Once the demands were read, members of BME led the way out of the building with Chancellor Schmidt following behind them.

The protest reassembled in the circle where Lewis Balom, the president of BME, gave a short history behind BME and thanked the UW-Eau Claire community for coming out.

Before beginning the hour of silence, Lewis asked that protestors have patience and listen to a statement by Chancellor Schmidt.

After thanking BME for the work they have done, Schmidt condemned the presence of racism on campus and expressed gratitude to protestors for showing up to the event.

“Today is a conflicted day for me,” Schmidt said. “It is a day of great sorrow that once again I’ve been asked to condemn yet another incidence of racism, sexism, homophobia and other forms of discrimination … and yet I’m hopeful because of all of you.”

Schmidt went on to ask members of the protest to take and feel the hands of the people closest to them.

“These are human beings,” Schmidt said, his voice filled with emotion. “They deserve the right to be treated with dignity and respect. The same blood is pulsing through all of our veins and I want you to feel that in the hand. I’ve always said together we are stronger.”

As protesters continued to hold hands, Schmidt spoke about the need for UW-Eau Claire to take positive action “today, tomorrow and in the days to come” as a community.

“You give me hope as a campus (that) we can make good on our diversity statements that we’ve had for decades,” Schmidt said. “You should expect transparency from us. You should expect action from us.”

Schmidt finished his speech by asking protesters to come together and support one another to take positive action steps in the days to come. He then thanked BME again, campus leadership and the students and faculty who came out for the event.

After Schmidt’s speech, Balom delivered a statement before proceeding into the hour of silence.

In an interview, Schmidt said it was important for him to be present at the event because he was “thrilled with the turnout” and “heartened” that Blugolds gathered to reject racism on campus.

Schmidt said he was also thankful for the list of demands BME presented.

“I’m grateful that they’ve put the energy together to make a list of the things they think could make the biggest difference in removing racism from this campus,” Schmidt said. “So, the administration and shared governance will look very carefully at everything on the list, and I welcome suggestions from the campus at large as to how best can we move forward.”

Schmidt acknowledged that, although he is not of a marginalized identity, he said his role during this time is to listen.

“As a white, straight male, I can only begin to imagine what this is like,” Schmidt said. “I can try to have empathy to understand what it might be like to walk in someone else’s shoes, but it is my job to listen carefully to what individuals and any of those underrepresented and oppressed groups have experienced.”

Maria Espino, a third-year sociology student, said though she wasn’t able to hear Schmidt’s speech due to the wind, she believed it was an important action for him to take.

“It was what was needed to be done,” Espino said. “It made it seem like he wasn’t hiding behind an office in a computer and sending out email after email.”

Espino took part in the protest because, as an ally to the black community and a student of color, she felt it was needed, she said.

“As a student of color you feel alone at UWEC,” she said. “It’s important to show support when this happens and expose the deep racism in this institution.”

Rashawn Williams, a fifth-year public relations student, was also present at the event and said, as one of the founding members of BME, he felt it was important “to show a force of solidarity for minority students on and off campus.”

The presence of Blugolds in general and different student organizations made Williams optimistic about the future of UW-Eau Claire, he said.

“That showed me right there that there’s at least some bit of hope once I’m gone that future students of minority, that there will be students standing behind them.” Williams said.