UW-Eau Claire acknowledges the university rests on Ojibwe land, vows to respect it 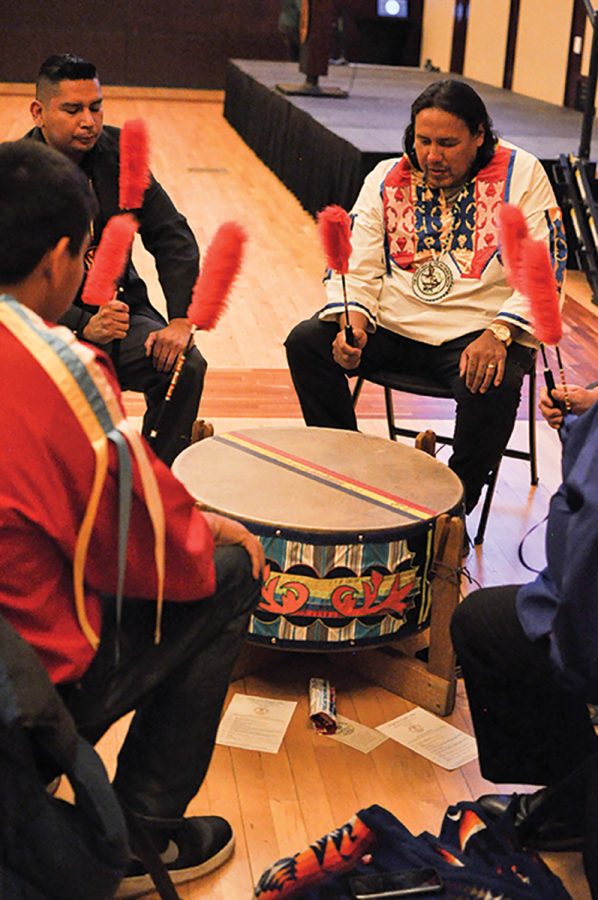 To celebrate Indigenous People’s Day, students, faculty, community members, and alumni gathered in the Ojibwe ballroom. Refreshments and music by Little Thunder was provided. Guest speakers took the stage to recognize and honor the land our university occupies and of Indigenous Peoples.

The drum beat filled the ballroom as people mingled around the buffet tables. Overhead was the seal of the university, gold on a backdrop of blue.

UW-Eau Claire celebrated its first official Indigenous Peoples’ Day in honor of the twelve tribes that call Wisconsin their home.

For the first time, the university has acknowledged that it rests on the lands of the Ojibwe people. This sentiment was not only said, but projected onto the screen behind the podium speaker, and can now be found on the UW-Eau Claire website.

“I/We Acknowledge that the University of Wisconsin-Eau Claire occupies the sacred and ancestral lands of the Indigenous Peoples. I/We honor the land of the Ojibwe and Dakota Nations,” the website says.

The Ojibwe and Dakota Nations will be honored in various ways through other events planned throughout the rest of the year, as well as the seal of the university, which will now be added to student’s reports, Chancellor James Schmidt said.

With a blooming American Indian Studies and language department, UW-Eau Claire is on its way to becoming even greater, Jim Oberly, a retiring professor of the field, said.

There was much emphasis on the Council Oak tree, a tree located to the north of the Davies Center, which had been a meeting place between the Ojibwe and Dakota nations for generations.

It is also the familiar tree on the seal of the university. The tree itself is protected by the university, after students rallied in its defense when the university was thinking of tearing it down while building the new Davies Center.

This would not have been the first time the Council Oak was harmed. The original Council Oak tree was damaged by lightning in 1966, and due to being weakened fell in a wind storm in 1987, according to the university website.

The tree we know today was planted in 1990 in commemoration of the original tree.

The tree is used as a symbol within the seal of the university. Before settlers came to Wisconsin, the tree was used as a meeting place between the Ojibwe and Dakota nations to negotiate peace, share knowledge, and celebrate, according to Heather Ann Moody, a professor in American Indian Studies.

The university has worked hard to keep the culture and rhetoric of the tribes alive through the teaching of their languages and cultures to students here at the university.

In honor of the twelve tribes of Wisconsin, on the third floor of Davies outside the Ojibwe ballroom, the twelve flags of the tribes hang from the ceiling.

The flags were introduced at the ceremony by Ashley Duffy, a UW-Eau Claire alumna who is also a member of the Red Cliff Tribal Nation.

“These flags are everyday reminders for Indigenous students and tribes that they belong,” Duffy said. “You honor all your ancestors before you and all the ones to come”.

The next to present after her was Edmund Manydeeds, a lawyer who graduated from UW-Madison and a member of the Standing Rocks Lakota Sioux tribe.

Manydeeds talked about his family and the racial abuse he received as a child for being from a mixed marriage. His mother was white-European, and his father was Sioux.

“People need evidence of the resilience of Indigenous people” Manydeeds said. “They overcame obstacles of not just living, but existing”.

At the event, the racial incident in the dorms at the beginning of this year was mentioned and briefly talked about by Schmidt and Manydeeds. Both agreed that the incident was a disgrace, and Schmidt mentioned that they were still investigating to find the perpetrator.