Students gather for pride in response to protest

Counter protest formed on campus to counteract protesters on Oct. 18 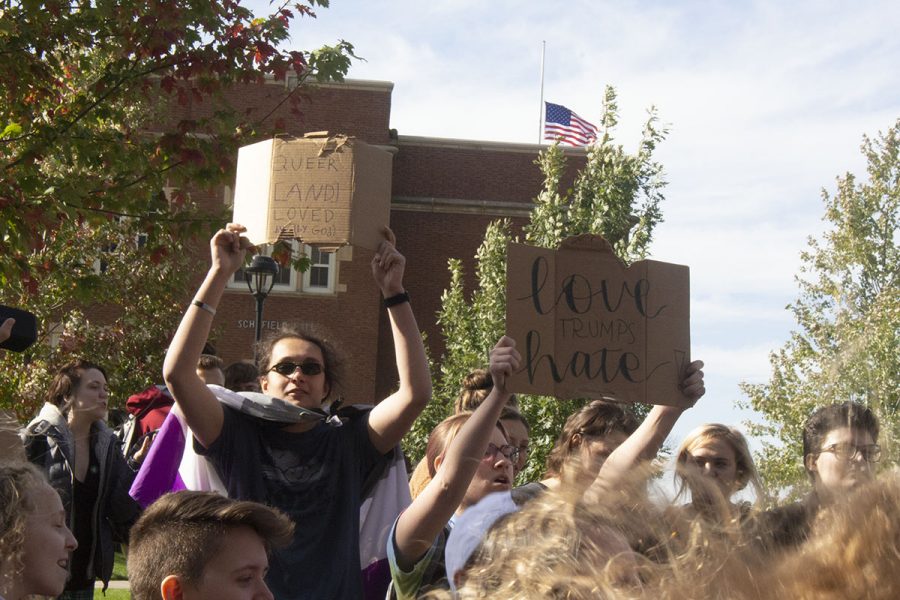 A group of two men and one woman gathered on campus to protest their stances about sin and repentance in front of Centennial Hall.

Appearing on Oct. 18, these protesters spread messages that were largely about sinning and how those present were going to hell. One man held up a sign with much of the text on it containing the same messages.

In response, students who opposed the message gathered around the three protestors.

According to Andrea Wendt, a fourth-year psychology student, the initial counter-protest was a very charged environment. There was a lot of screaming and students with pride flags surrounding the two men.

Wendt said the woman walked around and spoke about what they were protesting and that the woman in particular was targeted by the students’ angry words.

“I understand people wanting to say, ‘Hey, you’re not welcome here. Hey, this isn’t what our campus is about,’” Wendt said. “I totally understand that. But on the other hand, it does really feed into what they’re looking for. That’s what they wanted.”

Rossellin Gaitan, a first-year liberal studies student, went to the protest and took pictures as it occurred. She said that, despite the angry messages, she was proud to have come to UW-Eau Claire in light of the protest and counter protest.

“I couldn’t do anything but laugh because I’m like, ‘You’re going to come to Eau Claire and spread wrong information?’” Gaitan said. “At one point, he said if you drink water, you’re a sinner. At that point he’s just grasping at straws. It was just ridiculous to see. He saw a girl with leggings and he called her a s—.”

The signs used Christianity to justify much of the protestors’ arguments. The signs had messages like, “You will be judged by God” and “You are not a good person.”

The signs also listed sins against God, citing topics like fornication, homosexuality, “abortion/murder,” unbelief, effeminacy and other such subjects as sins.

Maria Tomashek, a second-year English linguistics student and part of the queer Bible study group on campus, said they felt their faith was misrepresented by the protestors.

They said they believe God is love, and while some people might think of it as tough love, the ones on the receiving end of the protest only see abuse and anger.

“As a Christian person, that really wounds me,” Tomashek said. “It’s really saddening to see, because I acknowledge that God has the ability to judge, but I think that’s God’s ability and not mankind’s. I also think God is gracious and, as a queer person, I dealt with a lot of shame and trying to reconcile both my queer identity and my faith.”

Jenna Frost, a fourth-year psychology student, was also at the counter protest. Frost said they grew up in a church with a mindset similar to the protestors.

“They really think that they’re doing this out of kindness because they honestly believe that we’re going to go to hell if we don’t change,” Frost said. “I also know that they also believe that if they don’t do anything to try to save us, then they’re going down with us.”