State Street opens ahead of schedule

After being closed for nearly five months, State Street is now open to the public 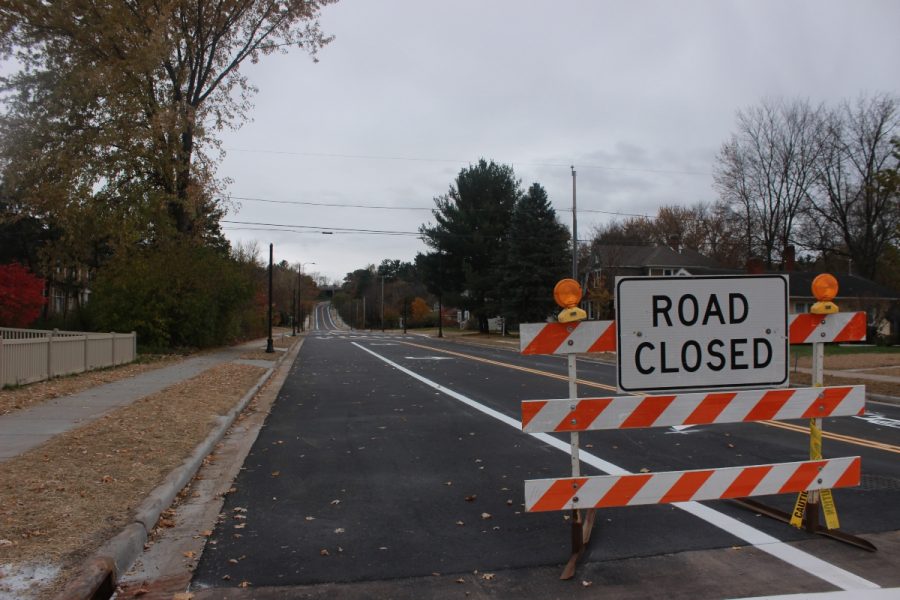 The construction on State Street, which has been in progress since June, was completed on Oct. 29, two days ahead of schedule.

Wasn’t State Street construction supposed to be done a long time ago? That’s what a lot of UW-Eau Claire students have been asking around campus for a while, said Joe Schmitz, a fourth-year accounting and finance student.

Despite student belief, State Street opened ahead of schedule on Oct. 29, and along with it, some changes that are expected to create a smoother commute, fewer accidents and more, David Solberg, the Eau Claire city engineer, said.

The contractor Haas Sons, Inc., based out of Thorp, Wisconsin, have been accredited for some major changes to the street which began construction on June 19, starting with three new roundabouts, Solberg said.

The third and final roundabout, which is a multi lane roundabout, has been created at the intersection at Lexington and State Street, which offers the most significant change, Solberg said. The vehicle lanes on the hill going up and down have been reduced from two lanes to one in either direction, with the addition of two bike lanes to this road, Solberg said.

Other pedestrian and bike features include an added sidewalk, an island at Roosevelt Avenue, and the replacement of wooden stairs on the hill with concrete stairs, along with what is called a “bike runnel.”

“People can traverse the steps while they’re walking their bike down,” Solberg said.

Solberg said that everything except parts of Lexington Avenue are now open, which are expected to be finished by Friday Nov. 1.

There were many issues that were addressed in these changes — the biggest ones being the safety of people, whether that’s pedestrians, bikers or drivers, Solberg said. The area was notoriously on the unsafe side for bikers and pedestrians because of how close they were to traffic, and was also a hot spot for accidents.

While severe accidents will go down, there may be a rise in the number of side swipes and fender benders at first, as people adjust to the new system, Solberg said.

Rumors of State Street construction taking much longer than expected circulated the UW-Eau Claire campus at the beginning of the semester and continued throughout the month of October. Solberg said that he does not have any ideas on how this rumor surfaced.

“There was nothing that was (a) completion date of early September by any means,” Solberg said.

Schmitz said he saw on the Eau Claire site that construction would be done in early October and  he had heard rumors as well.

“I think students understand that with any construction project, whether it’s done by the city or the University, that there’s always going to be a little bit of delay on it,” Schmitz said.

Construction has been “steady and on pace” and the workers have worked very hard to move the project forward as quickly as possible, Solberg said.

After the winter is over, the city has just one construction project planned that may impact students, and that is reconstructing Garfield Avenue from State Street, Solberg said.

In reference to how long this will take, Solberg said, “Not nearly as long as State Street.”