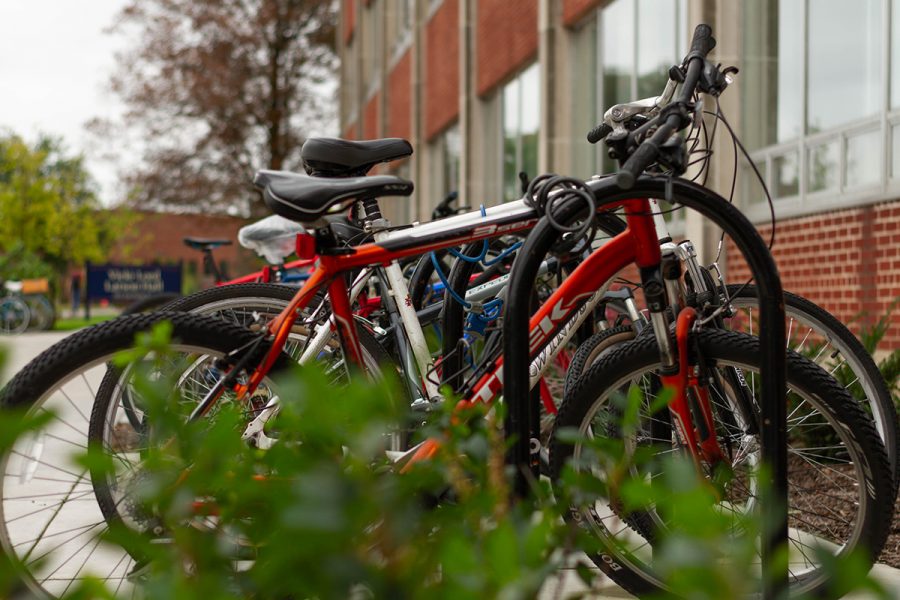 Bicycles fill the bike racks outside of Hibbard.

With almost 10,000 students, about 1,000 faculty and staff members, and the presence of cars, bikes, boards, rollerblades, scooters and mopeds, Sergeant Chris Kirchman of the university police department said there is congestion on campus.

“When you start putting all of those elements together and … it’s focused around class changing times, (that’s when) we tend to have those conflicts,” Kirchman said. “You’ve got everybody trying to share that same space.”

The officers would stop individuals when they saw the particular persons commit a violation, Kirchman said.

After stopping the individuals, the officers would then have a conversation with them and give them the university police department’s pamphlet about bike and play vehicle regulations to explain the violation they made.

However, no citations were handed out during those exchanges with officers.

“We’d rather educate than issue a citation at this point,” Kirchman said.

The UW-Eau Claire Police twitter account also posted two tweets on Monday, Sept. 23 as a part of their continued endeavor to inform students, faculty and staff about bike and play vehicle safety throughout the following week.

One of the tweets reads, “A reminder that if you are riding a bike or play vehicle through campus, state statute requires you to follow certain ordinances/laws,” and includes the pamphlet that officers were handing out to individuals who committed a violation.

Kirchman said officers consistently noticed that bicyclists were in the roadway, not stopping for stop signs and did not always yield to pedestrians in the crosswalk.

Wayne Carroll, a professor in the economics department, said he bikes every day to campus when the weather is warm enough.

He said he hasn’t had any dangerous instances on campus when he was biking, but said it is crucial that bicyclists do not startle any pedestrians.

“Sometimes I see other bicyclists riding pretty fast when there are pedestrians (around),” Carroll said. “(I’ve also) noticed bicyclists weaving around pedestrians and I think that’s a concern.”

“With play vehicles (such as rollerblades and skateboards), those technically are not allowed in the roadway,” Kirchman said. “They have to be on the sidewalk.”

In terms of recent bike incidences, Kirchman said the majority of occurrences have been bike crashes at the bottom of the Garfield Avenue hill.

“A lot of times the causes of those accidents are bikes that are not functioning properly,” Kirchman said.

Usually when these incidents occur, the brakes on the individuals’ bikes don’t work, so they are unable to stop, and they aren’t wearing a helmet, Kirchman said.

Katie Wilson, a health educator for Student Health Service, is a member of the campus Bike and Pedestrian Committee, which she said was formed in 2014.

Wilson said the committee is encouraging people to be more aware of their surroundings when they are biking, walking, using a wheelchair or driving on campus.

Vehicles and bicyclists especially, Wilson said, should travel slowly when they are on spaces that are shared with pedestrians to decrease the likelihood of accidents occurring.

“Being aware of your surroundings helps everyone stay safe,” Wilson said.

Although last week officers stationed near the Park and Garfield Avenue intersection and the Park and Roosevelt Avenue intersection didn’t hand out citations, Kirchman said that going forward, it will be up to officers to decide whether they want to give a warning and pamphlet to someone who commits a bike or play vehicle violation or if they want to issue a citation.

“Key points we’re trying to get across to students, faculty and staff is that we all have to share the same area and there’s a lot of people trying to share those areas,” Kirchman said. “Even when the construction is done, it’s still congested, so we’re asking everyone, … if everybody follows the laws as they’re intended, that will make it safer.”

If you are interested in attending the Bike and Pedestrian Committee meetings or becoming a member, Wilson said to contact her at [email protected] for more information.