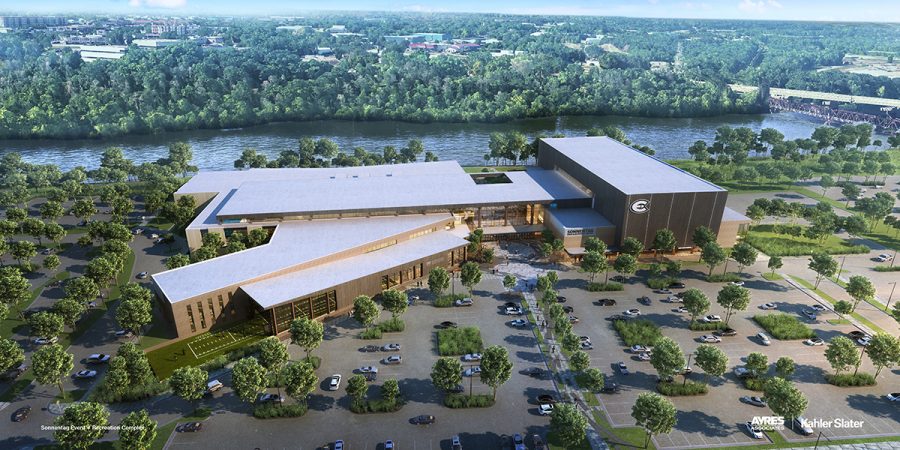 After five years in the making, UW-Eau Claire has announced plans for a new recreation center to replace Zorn Arena.

Since 1971, UW-Eau Claire has been looking to replace Zorn Arena on campus, Mike Rindo, the assistant chancellor, said.

The new complex will be named the Sonnentag Event and Recreation Center after two alumni of UW-Eau Claire, John and Carolyn Sonnentag, who donated $10 million in money and land for this new complex, Rindo said.

According to a presentation done by Chancellor James Schmidt, the “why” for this new project is crucial. Schmidt said Zorn Arena is “obsolete and undersized” and that there is a need for more recreation opportunities for UW-Eau Claire students.

“As part of the master plan, we did a study and we found that we really are undersized for our recreation facilities for our student body, and especially the participant rate,” Rindo said.

He said the building is going to be an event center allowing for additional recreation opportunities and space for all UW-Eau Claire students, such as an aquatic center for swim and dive, and multiple basketball courts.

In his presentation, Schmidt said there will be enough seating in the courts for approximately 4,100 people, which is over double of what Zorn Arena currently holds. He said the complex will host other athletic tournaments and sporting events, as well as indoor concerts and commencement ceremonies.

In the midst of this plan, Rindo said they were looking for businesses to partner with. During the process, the university approached the YMCA, which was already in need of space for their facility, and asked if they would be interested in partnering with UW-Eau Claire for a potential project that would include recreation facilities for students and the YMCA members, Rindo said. The YMCA agreed.

“The idea here is to preserve the land we have because we don’t have much,” Rindo said. “That’s another reason why the master plan called for doing shared facilities with the community.”

Rindo said (we) are “land locked” due to the neighborhoods directly adjacent to campus, as well as the Chippewa Valley Technical College, Sacred Heart Hospital, the state office building and the Water Street commercial district. He said all of those things have bound the university in terms of any kind of expansion.

Rindo said the design of the Sonnentag Event and Recreation Center is going to be similar to that of the construction of the Pablo Confluence Center.

Just like the Pablo Center, the Sonnentag Complex will not be owned by the state, but rather by a non-stock, non-profit corporation, which is the Eau Claire Community Complex Incorporated, Rindo said. This means if the student referendum for the new complex passes, UW-Eau Claire will move to get a lease approved to lease their portion of the complex and recreation center, he said.

Charlie Johnson, a fourth-year political science student and student body president, said the new complex should be viewed as more than just a recreation center.

“(It’s) bringing with it this incredible event center that can host concerts (and) conferences,” Johnson said. “And it’ll host graduation and take us out of Zorn Arena, where students would have to deal with 100 degree weather in the spring.”

Johnson said he’s excited to start engaging the student body in the process of this new complex. The people involved with this project are going to want to “hit the ground running,” he said, as soon as the second semester begins, gathering everyone from athletes to science majors to educate them on what this project will be.

“It’ll be an exciting next couple of months,” Johnson said.

Assuming the student referendum passes and all goes as planned, Rindo said they are aiming to begin construction of the Sonnentag Complex in July 2020.