Local journalists discuss the impact of social media on reporting

The Chippewa Valley Post hosted a News Engagement Day panel on Oct. 1 to discuss the effects of social media on modern reporting 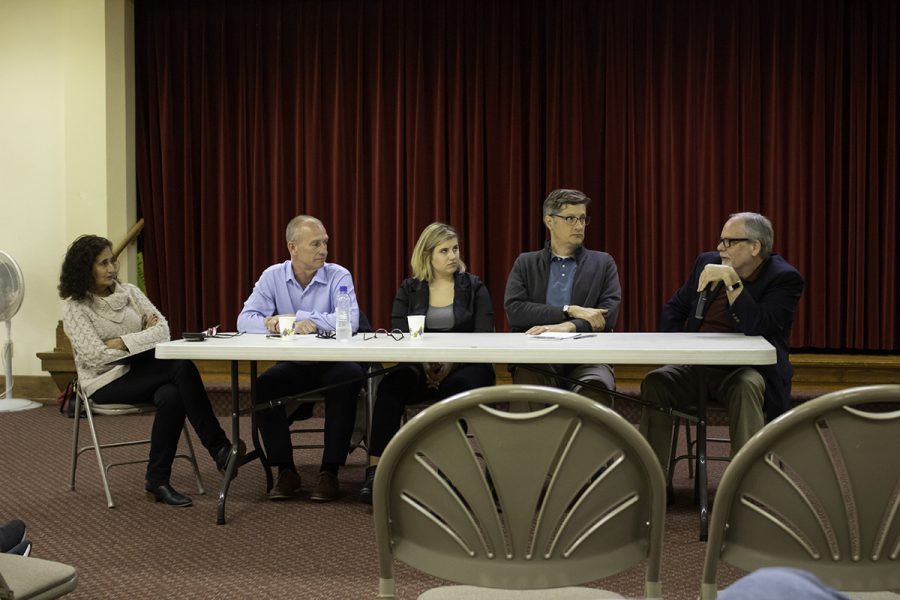 The four panel leaders and Jan Larson, a professor of journalism at UW-Eau Claire, discuss their opinions on the impact of social media on news.

Once a year, journalists from all over the United States congregate to discuss one thing — the principles and processes of journalism in a democratic society.

The Chippewa Valley Post hosted a panel discussion for News Engagement Day at Grace Lutheran Church on Tuesday, Oct. 1 to discuss how social media has affected the way news is prepared before it’s presented to the public.

Following its inception in 2014, News Engagement Day has become a worldwide event — beginning on college campuses with communication and journalism programs — where people of all ages and across the world are encouraged to read, watch, listen to and discuss news.

Tom Giffey, a managing editor at Volume One, said social media makes it possible to get immediate feedback from the public, Giffey said.

“You have a much more fluid two-way relationship with people, which helps both ways,” Giffey said.

One positive effect that social media has on politics is the opportunity for voters to interact easily with candidates and elected officials, according to an article by Sysomos. Before social media, if someone wanted to meet a politician or candidate, they’d have to attend a live event.

Liz Dohms, a digital content producer for Wisconsin Public Radio in Eau Claire, said social media is an important element for reporters because it’s one way they can reach their audiences.

She said social media also really measured, and they are deliberate about who can post and when they can post.

“It’s one way we can engage with our audience,” Dohms said. “But in other capacities, (posting on social media) will showcase the articles that the reporters or myself are writing. So, it’s a really important element and good way to connect with our audience.”

Dohms said that’s just one way they connect with their audience, she said.

A survey performed in December of 2018 by the Centre of International Governance Innovation, showed that 86 percent of Internet users admitted they had been tricked by fake news.

Johnson said it’s the public’s responsibility to recognize when news is fake.

“We can easily identify the Washington Post and The Leader-Telegram are trustworthy news sources,” Dohms said. “But if you’re coming against something on social media and you’re reading it, there’s opinions and not fact, and there’s no attribution for it, you can question that.”

She said the responsibility may fall on journalists to explain what the public needs to do to make sure they are looking at a wide variety of news sources.

Social media also has an effect on politics — specifically elections, said Jan Larson, the chair of the communication and journalism department at UW-Eau Claire.

With modern technology, it is now possible to attend virtual events where one can participate in live streaming events and interact with politicians and candidates, according to Sysomos.

Social media is also used to target certain demographics.Targeting is used in advertising to ensure ads reach the right audience, the Sysomos website said. If a candidate wants to address the concerns of women and college students, among others, they can tailor their messages.

Because social media is still relatively new, people are just beginning to see its effect on society today. Recently, there have been proposals for internet voting, which could potentially lead to an increase in participation in elections.

Although there are positive effects of social media on politics, there are also some bad effects.

Social media allows candidates to be instantaneous. Instead of going through with a campaign announcement, it’s faster to post online, especially for targeting purposes, like attacking other politicians and their campaigns.

Ganga Vadhavkar, an associate professor for the communication and journalism department at UW-Eau Claire, said social media has both positive and negative attributes.

“For example, when you’re covering a story in real time where you can’t worry about AP style,” Vadhavkar said. “And you need to get the story out, you write in blog format and update (online viewers).”