Investing in our future 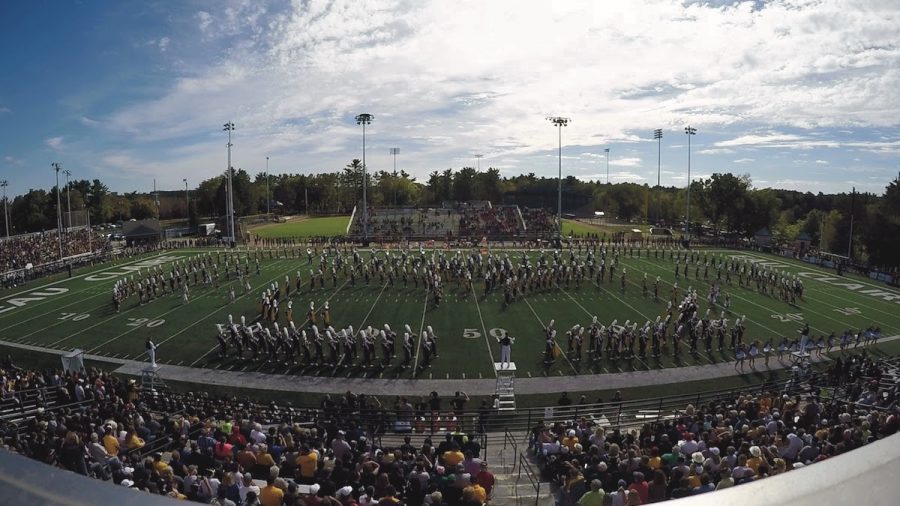 The university has passed plans to add new degrees, increase the size of the Blugold Marching Band and add three new sports.

UW-Eau Claire has officially launched its strategic enrollment initiative during a press conference on Monday, Oct. 28. Officials are calling it “Investing in Our Future.”

The university has passed plans to increase enrollment by adding approximately 405 students through the addition of new degrees, more members to the Blugold Marching Band and an additional three sports.

Chancellor James Schmidt explained that the reasoning behind expanding these specific areas was backed by research. The new courses being added are in high-demand areas,  Schmidt said, as is adding more members to the marching band and athletics.

With every incoming freshman class, the BMB welcomes 11-13 valedictorians, and posts on average a 3.60 GPA or higher. Student-athletes have a retention rate of 90 percent from year to year, which is 30 percent higher than the rest of the university.

The university has plans for hiring additional faculty members to these undergraduate majors: biomedical engineering, actuarial science, public health and bioinformatics, as well as the newly-added athletic training master’s program.

“It is our highest priority to do all that we can to help our students complete their coursework in a timely manner — namely, to graduate in four years,” Patricia A. Kleine, provost and vice chancellor for academic affairs, said. “This will significantly-reduce their student loan debt or get them earlier into their careers.”

In addition to new courses and facilities, the Blugold Marching Band will increase in numbers again, rounding out at 500 members. That will maintain the BMB as the second-largest collegiate marching band. Randy Dickerson, professor of music and BMB director, said the largest band has 530 members

“When I first got here in 2000, the band numbered 60 people,” Dickerson said. “Our goal was to get the band up to the collegiate average — regardless of division  — of 150 members. Once we got to 200 members, we realized we had something special.”

Many universities don’t have waiting lists for their marching bands, according to Dickerson. But the BMB has a growing list, pulling in students across the country from states spanning from New York to Colorado, Georgia to Illinois.

Finally, the Blugolds are reinstating baseball for the first time since 1995 and adding women’s lacrosse and men’s soccer.

The addition of these three new sports will attract 94 new student-athletes to campus. Forty-two roster spots will be given for baseball, 24 for women’s lacrosse and 28 for men’s soccer. While it is unclear where these new sports will play, Dan Schumacher, director of athletics, has a larger plan.

“The construction up behind the McPhee-Olsen center opens up our campus to host both men’s and women’s soccer and the new women’s lacrosse team,” Schumacher said. “While Carson Park does have a baseball field, it is unclear if they will play there.”

Carson Park does not have any offices for coaches or a training room, making it difficult to host a college team. While several persons during the press conference may have assumed that ballpark would be the home of the future team, Schumacher made it clear there are no set plans at this point.