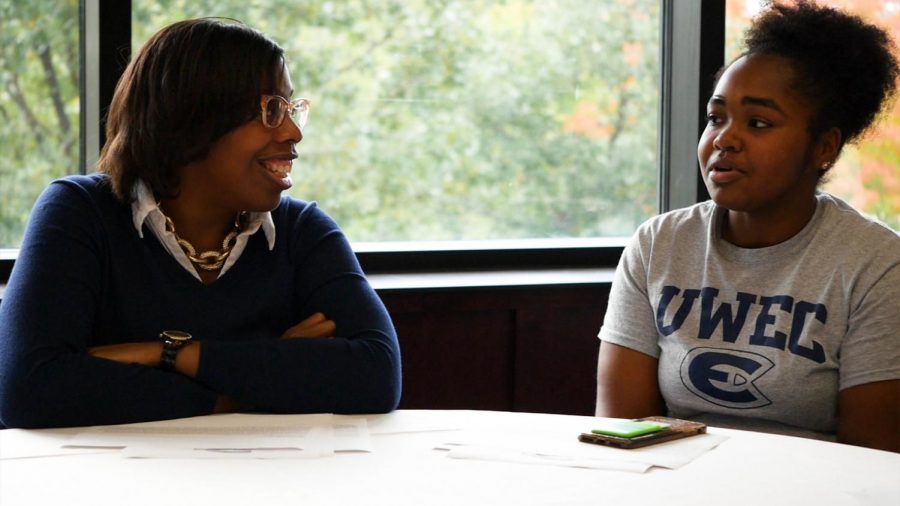 Several, if not many, students of color at UW- Eau Claire said finding a sense of community on a campus that is 89 percent Caucasian (according to collegesimply.com) is incredibly important.

Angela Pittman Taylor, a 2000 Eau Claire graduate, is taking big steps to ensure that current and future Blugolds are able to find that community.

Along with 2002 graduates Angie Hambrick and Michelle Bellinger, Pittman Taylor said she recently established the Alumni of Color network to meaningfully supplement the existing support for students of color by the Office of Multicultural Affairs through “mentoring, networking and fundraising efforts.”

The Network has several events planned for the upcoming Homecoming week, such as a scholarship luncheon, an alumni career panel discussion for interested students, as well as their first board meeting. This is when they will select and confirm their board members as well as develop a three-year plan.

Pittman Taylor said it all started when she, Hambrick and Bellinger organized a reunion for alumni of color in 2009, and were unexpectedly joined by Jim Vance, who, at the time, led The American Ethnic Coordinating Office (now OMA). Pittman Taylor said Vance was a “larger than life advocate for students of color.”

She said Vance shared his vision of “seeing his students achieve success, return to campus, get organized and pay it forward” with their group.

“That’s when it became abundantly clear that we had a higher calling,” Pittman Taylor said, who shortly after penned the name “UWEC Alumni of Color.”

Though Pittman Taylor said the OMA did a “phenomenal” job supporting students of color such as herself during her time on campus, students today said they are glad to see further support and community.

Levaughn Deveaux-Friar, a second-year marketing student who transferred to UW-Eau Claire last year from Houston, said he has felt a sense of community among students of color since arriving, but that organizations such as The Alumni of Color Network are “definitely needed,” especially as far as retention rates are concerned.

[In 2009 only 31% of African American transfer students graduated from UW- Eau Claire.] [According to an equity report by the Center for Urban Education (CUE)].

“Retention rate is something we need to work on, as far as people of color,” Deveaux-Friar said. “Promoting diversity on the school website might be misleading to some, because people of color only make up  a small percentage.”

That is, black students account for about 1 percent of UW- Eau Claire’s population, according to collegesimply.com.

“There isn’t much representation on campus,” Marinez Smith, a third-year social work student and President of the Black Student Alliance, said. “It sometimes makes us uncomfortable just being an outsider. Or for lack of better words —just not feeling completely welcomed or not being comfortable —like in the overall class setting or in the dorms.”

However, Deveaux-Friar said he is excited to hear about The UWEC Alumni of Color Network, who are hoping to connect with students next week through their events, Pittman Taylor said.

“Let us know what you need from us, so that we can serve you to the best of our ability,” Pittman Taylor said. “We want to know you, support you and ultimately serve as a platform from which you can pay it forward once you’ve graduated.”