As a long-time member of the force and a former Blugold, Jay Dobson shares how he plans to engage more with students and provide “service” to the campus community 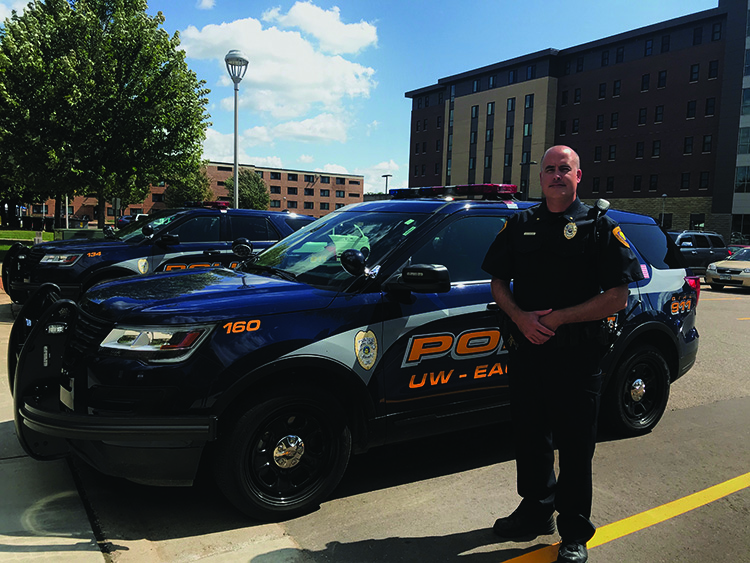 Jay Dobson officially became UW-Eau Claire’s new police chief on July 1 and has since started to plan ways that the university police department can engage more with students.

UW-Eau Claire’s new police chief has been a part of the university police department for 23 years now.

However, he said the “service” aspect of this field truly captured his attention.

“Any police department will talk about the service component, (but) I think that university policing especially is very service oriented,” Dobson said. “Certainly when enforcement needs to happen, we do the enforcement, but we also pride ourselves on what is often times not necessarily considered police functions. We just really want to provide a service.”

The university police department is one of the only 24/7 departments on this campus, he said, which is why Dobson said he is making it his mission to engage more with students now that he is the new police chief.

“That’s what we’re all here for right? Is students and academics,” Dobson said, acknowledging all university faculty and staff. “Everything is in support of students.”

When he became a Blugold, Dobson said he had already received an associate’s degree in criminal justice and was working for the university’s police department part-time while pursuing a bachelor’s degree in management at UW-Eau Claire.

Deborah Newman, the associate director of housing and residence life and the chair of the search and screen committee for the police chief position, said she believes Dobson’s status as a UW-Eau Claire alumnus has personally impacted his past and current positions on the force while he continues to demonstrate “a lot of what we’re wanting to have happen on this campus.”

“I think it’s an impact more on his side that there’s a lot of ownership and commitment to this institution,” Newman said. “He’s a quality staff person that values being here, so we’re lucky that he wants to continue to be here.”

Dobson said that being an alumnus and in a management position has allowed him to further understand the academic relationships the university police department has and needs to make with other campus departments and organizations.

As the new police chief, Dobson said he would like to develop and establish more relationships and trust with not just the university community overall, but specifically with marginalized identities, such as students of color and students in the LGBTQIA+ community.

“We see the news and we see when there’s a negative interaction with law enforcement,” Dobson said. “We especially take note of it when it is (between) a person of color and law enforcement, (but) rather than be reactive to something that might come up, I think it’s important that, as much as I can, develop relationships with these communities.”

Dobson said he knows being stopped by an officer is a nerve wracking and unpleasant experience, but he ultimately strives for the university police department “to provide the best and safest environment (they) can.”

As Vice Chancellor for finance and administration, Haven oversees the police department and said he is Dobson’s direct supervisor.

Even though Haven has only been in this position for almost a year, he said Dobson is a dependable person and is an asset to UW-Eau Claire.

Haven cited President Trump’s visit to UW-Eau Claire as an example where Dobson kept students’ safety as his top priority. Haven said Dobson plans to do so again when candidates visit campus during this upcoming election cycle.

“Even for this coming year, when we get into this election cycle, Zorn arena is probably going to be used for political events and (Dobson) was here in the past when Trump came to town, so he’ll immediately know what needs to be done to keep everybody safe,” Haven said.

With plans to continue working on and developing this potential internship program, Dobson said “It was a great opportunity for (the student) and now hopefully it has set the stage for other interns to come in.”

Dobson said he hopes to have more law enforcement present at campus events like Blu’s Organizations Bash and also continue to reach out to students through the Student Patrol program, where students are deployed on Thursday, Friday and Saturday evenings to act as extra eyes and ears for the university police department.

“It’s all about being a part of the campus community outside of the law enforcement functions,” Dobson said. “A lot of the times the interaction can be kind of negative because someone’s in trouble or somebody got hurt, somebody did something wrong and often times that’s the only interaction (with the police), whereas I’m trying to change that so there’s more interaction with police on a down-to-earth, friendly, non confrontational setting,” Dobson said. “That’s what law enforcement can always do better, and I think particularly on any university setting, I think it’s something we really need to strive for.”