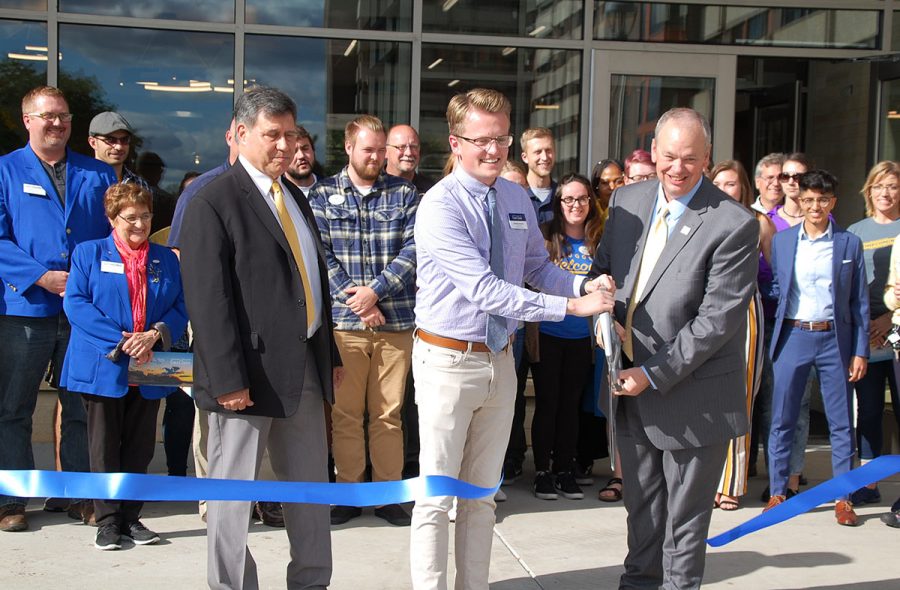 Many UW-Eau Claire alumni may remember staying in a hotel for their first year of attending the university.

The housing shortage crisis has been a real issue here on campus, with the university typically housing around 300 students in hotels off campus every academic year, Chancellor James C. Schmidt said.

This shortage has finally been solved, according to Schmidt.

“Today marks a turning point in UW-Eau Claire’s ability to meet the demand for student housing,” Schmidt said. “For more than 40 years, our campus has suffered from chronic shortages of student housing.”

At 4 p.m. on Sept. 6, students, faculty and staff attended the program for the grand opening and celebratory ribbon cutting for the new residence hall on campus, The Suites. There were several guest speakers at the event, including Schmidt.

“I want to thank all the people involved in it,” Schmidt said.

He said he is very excited about this new addition to campus and went on to explain the amenities being made available and everything The Suites has to offer.

Almost all of the older residence halls on campus are traditional in the sense that they have two students to a room and communal bathrooms down the hall, but The Suites include single or double rooms that house four students each.

They also have shared bathrooms between them, a lounge, and a kitchen on the main floor for all the students to enjoy, Schmidt said.

“The six-story building is almost the height of Towers, which is 10 stories,” Schmidt said. “This will create a more enjoyable environment for students and also puts it in standard with current building codes.”

The most important aspect of this new residence hall is the fact that it will enable the university to house 432 additional Blugolds, which will “enhance the student experience,” Schmidt said.

“Students who stay on campus and are engaged with their fellow students in university programs are far more likely to be retained for their freshman and sophomore year and are more likely to stay on track to graduate in a timely fashion, saving them tens of thousands of dollars in student loan debt,” Schmidt said.

Quincy Chapman, the director of Housing and Residence Life, spoke at the ceremony as well.

“The Suites residence halls were made possible through the hard work of UW-Eau Claire faculty and staff and students who worked on the design team,” he said.

The project was advanced by the support of the UW System Board of Regents and by legislators within the state of Wisconsin, Chapman said.

One of these students who helped bring the project on paper to life was Student Body President Charlie Johnson.

He has been watching it come together and said, “it has been something truly special. From the initial brainstorming sessions to the first shells of dirt to the final electrical wire, hundreds of individuals have played a role.”

“The building will allow for the transition of more independent living,” Jamie Siseman said.

Siseman is the residence hall association president and is now a resident in The Suites.

“We have all new tech; even the garbage shoots are electronic. Life is good here,” Siseman said

Siseman said she is very thankful for the students of 2013 who voiced their opinions, not for their future, but for her present.

After the guest speakers, the celebration continued with Charlie Johnson cutting the ribbon. The celebration then concluded with food and tours of the newly-built dorms on the sixth floor.

“The Power of AND goes beyond the students and into the very structures we reside in, here at UW-Eau Claire,” Siseman said.

Jenna Erickson can be reached at [email protected]