One mind, one purpose 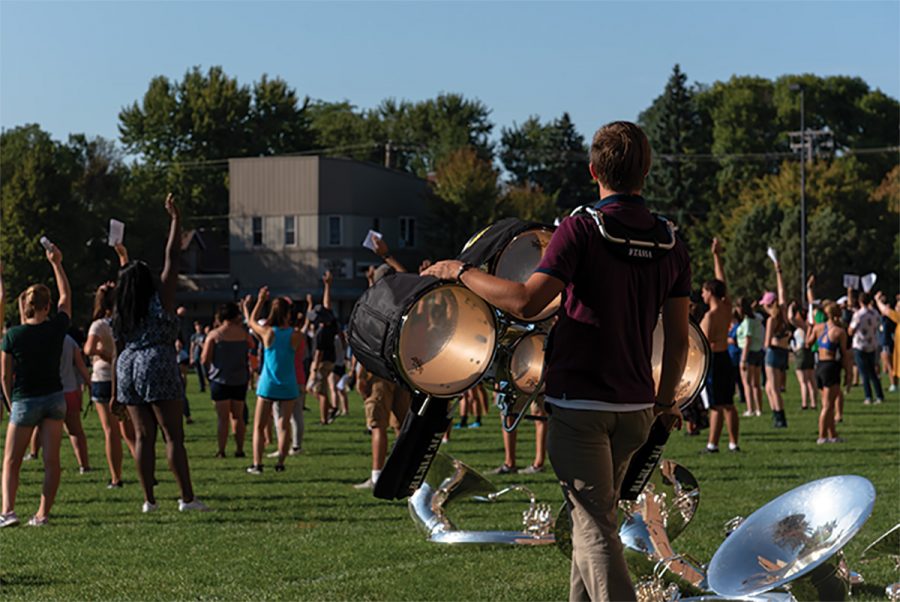 As the Blugold Marching Band hosts “The Greatest Show,” members of the band prepare new and never-before-seen elements.

At just 14 years old, current Blugold Marching Band announcer Guy Dee was recruited by Randy Dickerson for the band. Now, in his 16th season, Dee said he does not intend to stop his involvement in the program anytime soon.

“That is the kind of power it has over people,” Dee said, “After marching for all those years I decided to not give it up. Even though I live in Madison, I still come back (to Eau Claire) for everything and I have not missed a show in 16 years.”

According to the Blugold Marching Band’s website, the organization was founded in 2000 with 60 people and now comprises 475 students.

When reflecting on the past two decades of the BMB, director Dickerson said he saw the need to develop the group into the band the university sees today.

“I realized that we had to modernize,” Dickerson said. “We changed the style and went to pop and rock — styles that were more suited towards college students and something that was more audience friendly.”

Dickerson said the incorporation of body choreography in 2004 allowed both the audience and band members to have fun with the music they performed.

“It was difficult to get students to loosen up,” Dickerson said. “But once we started pulling them out of their shell, they started enjoying it more and more. That is when we started noticing an audience reaction.”

Dee said the atmosphere and attitude amongst the BMB players is what makes the organization so special at the university.

Dickerson said he selected this year’s theme — The Greatest Show — with the intent of showing the best of what the BMB is capable of alongside new elements the band has never used before.

“With this anniversary, we needed it to be the greatest show we have ever done here in the BMB,” Dickerson said. “We enlarged the band and added some electronics to the sidelines. We have added several things that the crowd will notice on the field.”

Dee attributes the band’s successes to the dedication Dickerson has shown to growing the organization.

“I do not know any other school that can point to their band and say ‘We made this,’” Dee said. “This is in living memory and something to be proud of and celebrated.”

As the anniversary continues throughout the year, Dickerson encourages members of UW-Eau Claire to notice what the BMB is doing outside of Carson Park and around campus.

“A lot of students do not realize that on the off weekends when there is not a Blugold game, we are actually somewhere else,” Dickerson said. “This year, we are going to Australia and New Zealand for three weeks in January. When we will be in Australia, we are performing twice at the Sydney Opera House.”

Dickerson said he believes in providing unique opportunities at UW-Eau Claire to highlight the diverse population the band represents.

“The BMB draws in the brightest and the best of students from all academic disciplines to come be apart of this,” Dickerson said. “We have taken a different approach to marching band here and it has really taken off.”