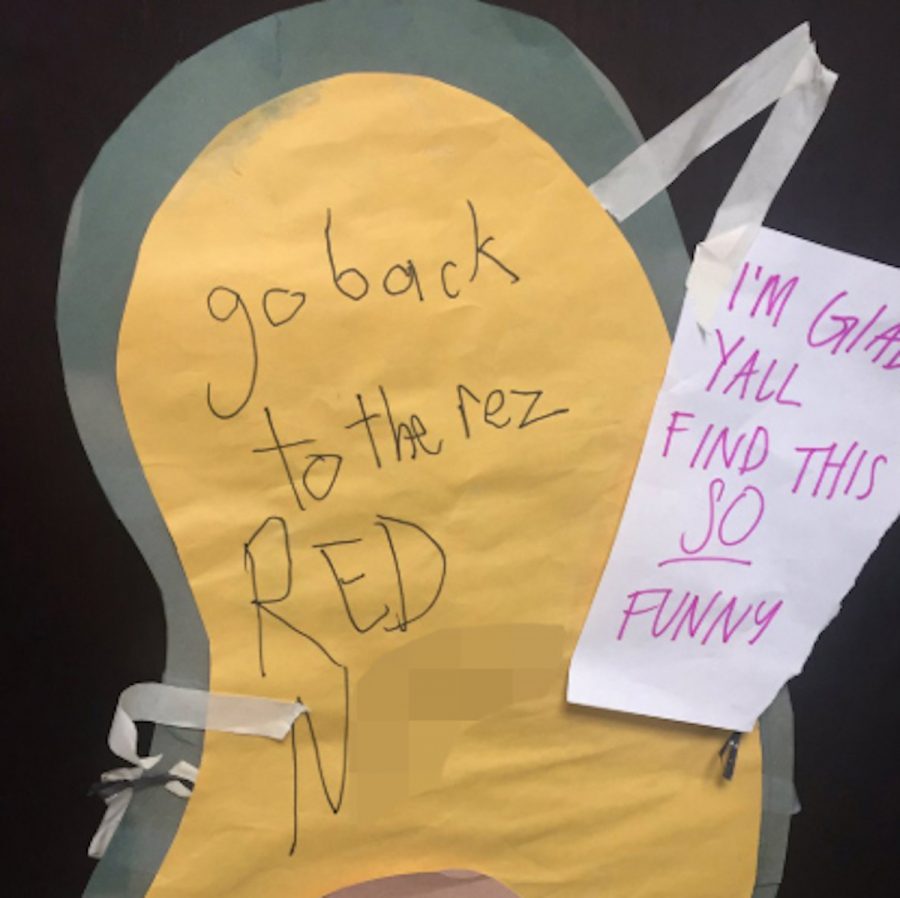 On Sunday morning, Kayde Langer, a third-year sociology student, went to reattach one of their door decorations that had fallen to the floor during the night in David Kaarlgard Tower.

But something about the paper avocado was different. Written across the decoration were the words “Go back to the rez,” followed by a racial slur directed toward Native Americans.

Langer, who is Red Lake Ojibwe and vice president of the university’s Inter-Tribal Student Council, said the first thing they did was hang the decoration back up on their dorm room door and report the vandalism to a resident assistant.

“I was really shocked at first,” Langer said. “It took me a little bit to actually comprehend the feeling of it. It was very shocking because I’ve experienced racism here before, but it was never like this.”

Langer photographed the graffiti and shared the photo on Twitter with the caption: “Welcome to the University of Wisconsin-Eau Claire.”

“I could’ve taken it down and then, you know, reported it, but no one would have known about it,” Langer said. “I took risks putting it back up and posting it, but at the end of the day, I still feel it was the right thing to do.”

Chancellor James C. Schmidt addressed this tweet about five hours after it was posted, tweeting in response:

“There is no place for hate speech @UWEauClaire. The racist who wrote this despicable comment is not welcome on this campus. I have asked the Bias Incident Response Team to investigate. I ask all #Blugolds to join me in supporting one another in condemning all forms of hatred.”

On Monday morning Schmidt addressed the issue further by sending out a mass email to the entire university.

“As a campus community, we cannot accept such intolerance,” Schmidt said in the email. “This kind of racist slur is simply antithetical to who we are as a university that values equity, diversity, and inclusion … When a member of our Blugold Family is targeted, we are all impacted and called to speak with one voice against bigotry, discrimination, and intolerance. This campus must act when hatred rears its ugly head.”

Langer said the incident has been very upsetting for them. They have received both support and backlash for their post, which they said has been very overwhelming. According to Langer, some Twitter users began accusing them of writing the message themself, making attempts at handwriting analysis. Others began reposting Langer’s old social media.

Langer said this was just an effort to invalidate what happened, attributing that sort of behavior to white supremacy and ignorance.

Despite receiving some negative feedback to the post, Langer said they have also received support from the university and their peers, getting notes from their floormates and words of encouragement from university faculty.

According to Langer, acts of racism against them and other Native students are very common. Langer said they have reported previous incidents to the university before, but nothing was done.

A large part of their life revolves around their Native American culture, Langer said, and they have even struggled to perform spiritual practices in their room without the need for an RA to stand watch outside their door.

Mike Rindo, assistant chancellor of facilities and university relations, said he is unaware of any previous incidents being brought forward to senior administration.

“They could have been brought forward to the Bias Incident Response Team and, oftentimes, the outcomes of those kinds of inquiries are not available because of the federal privacy rights law protecting student records,” Rindo said. “So, let’s say that that did occur: oftentimes you’re not going to be able to find out what the outcome was – at least from a public perspective. But from a senior administrative perspective, this is the first time … that the administration was made aware of any kind of issues.”

According to Rindo, Schmidt has ordered an investigation of the vandalism — an investigation led by the Dean of Students’ Office and spans across the university police department, the Office of Multicultural Affairs and the Bias Incident Response Team.

The first reports of incidents like this typically go directly to the BIRT, said Rindo. It is their responsibility to determine what steps should be taken next. Additionally, the BIRT serves to lend support to victims who have been affected by bias acts. The BIRT also offers different programming and outreach, said LaRue Pierce, dean of students.

“The university is working diligently at improving our environment on campus to be more welcoming and supportive,” Rindo said. “If there were levers that were obvious to pull to rectify this situation, we would do it. But the fact of the matter is: the university is a reflection of society at large … There’s no way that you can say that this is going to be wiped out in terms of the incidents. You’d like to be able to say that we’re able to prevent these a hundred percent, but realistically, that’s not the case.”

Rindo said racism on campus is not an issue that can be easily solved. Regardless, he said one incident is too many. What makes this incident especially troubling, Rindo said, is the fact that the hate message was directed toward one specific student, rather than being written in a shared space.

Pierce said it is important to emphasize that the university is responding. The university is using all available resources to offer support to Langer and catch the individual or individuals who vandalised Langer’s door.

“Any time incidents of incivility – incidents of racist bias, harassment, anything that puts our community at risk – we respond to,” Pierce said. “There are resources on campus if a student is feeling threatened, if a student needs to talk to someone in our counseling center, they can come and talk to me, the police department is a resource as well and we have many departments on campus that are resources.”

If the identity of the student is uncovered, Rindo said that individual or group of individuals will be subjected to an adjudication process to determine where their actions fall on the continuum of discipline — a process that could result in suspension or expulsion.

Debra Barker, director of UW-Eau Claire’s American Indian Studies department, said her first concern after hearing of the incident was for Langer’s wellbeing.

“We have to understand that (they’re) experiencing a kind of emotional and psychological harm – a damage – that (they’ll) remember for the rest of (their) life,” Barker said. “And that’s the memory of UW-Eau Claire that (they’ll) take with (them).”

Barker said Native American students make up around one percent of the university’s student body, despite Eau Claire being on land what was stolen from Indigenous people. Barker said she has met multiple potential or incoming Native students who expressed concern regarding the university’s reputation of bias against American Indians.

According to Barker, the solution to the problem of bias against Native students on campus is simple: education. With only two Native department faculty, Barker said AIS aims to educate as many students as possible on the real-versus-assumed dimensions of Native American people.

“We, as an ethnic-racial group, have experienced genocide — near genocide — erasure, marginalization, persecution and slander in the ways that we’ve been represented in the media historically,” Barker said. “We are the one racial group in the state of Wisconsin that is consistently subject to rumor, to stereotyping and the root problem, of course, is ignorance.”

While Barker said she commended the university for its quick response to the issue, it is her belief that the university must go beyond simply condemning the actions of the student or students responsible.

Barker also said she believes the FBI should be brought into the investigation.

“If there aren’t consequences for the student who committed this crime, acts of racial violence — because acts perpetrate emotional and psychological violence — will occur again,” Barker said.

The Inter-Tribal Student Council hosted a panel Wednesday afternoon to discuss the incident and the actions that are being taken in the aftermath. Chris Jorgenson, chair of BIRT, and Pierce updated spectators on their progress and members of ITSC shared their reactions to the incident.

“It makes me, personally, not want to be here,” said Tressa Lange, president of the  ITSC.

Both Lange and Langer said Native American students are not taken seriously by the university, resulting in regular experiences with racial bias. Langer, who just turned 21 on Monday, said they have not been able to live their normal life since the incident occurred.

“There’s nothing that’s going to be able to fix this,” Langer said to the audience. “In all honesty, I just want this all to go away.”

If anyone has any information regarding the hateful message that was written, the Dean of Students’ Office is open to anyone willing to lend their support.