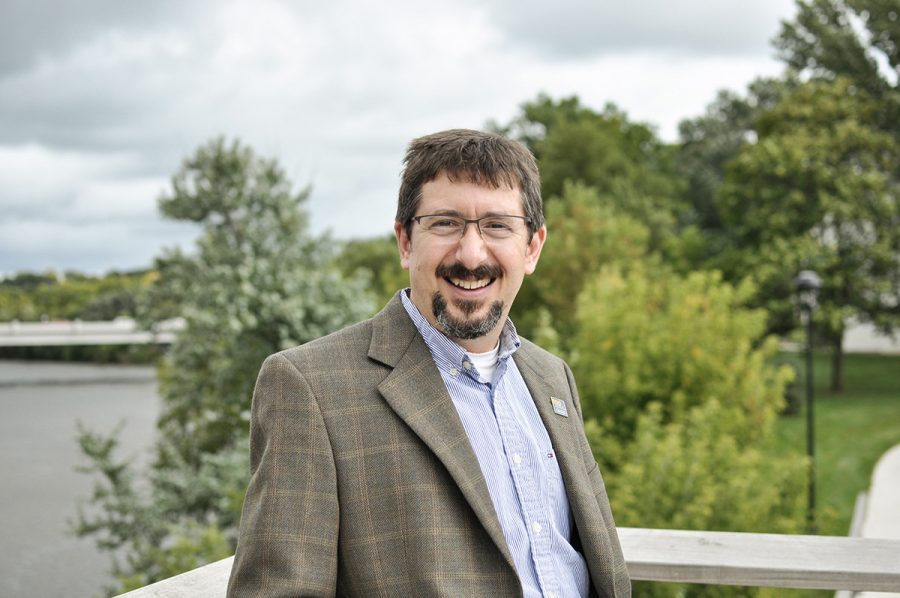 James Boulter, a professor of chemistry, poses on the UW-Eau Claire footbridge.

James Boulter, a UW-Eau Claire chemistry professor, spent the summer swimming in work as he completed a research project in Iowa concerning climate change and flooding.

Boulter said he has been studying science and climate change for much of his adult life. After receiving an undergraduate degree in environmental chemistry, Boulter said he went on to do his doctorate in analytical chemistry, but with an emphasis in atmospheric sciences.

“I’ve been studying climate change for about two decades,” Boulter said. “As an atmospheric chemist interested in sustainability, climate change is the issue to focus on.”

Boulter said he spent the summer studying climate change in Iowa following the intense flooding that occurred in the area, looking to answer questions that might shed light on the environmental circumstances that led to the flooding.

“What’s the primary driving forces of climate change in Iowa?” Boulter said. “What are the impacts anticipated in Iowa? And what are some policy responses that we should aim for? Iowa has been seeing a lot more catastrophic flood years recently. There is at least some evidence that the latter part of this century starts to look like some of these really bad past flood years.”

What Boulter found, he said, was that both an increase in heavy rainfall and an increase in temperature both contributed to the flooding dangers in Iowa.

“What drives flooding is the ongoing temperature increase,” Boulter said. “The most obvious and direct impact of climate change is the fact that since the 1970s, the temperature has been increasing about 0.4 degrees Fahrenheit per decade. It’s warming. And there’s every reason to believe that it will continue to warm and even accelerate.”

Along with this steady increase in temperature, Boulter also said rainfall is a contributor to the environmental factors that cause flooding.

“Rainfall has been steadily increasing over the same period of time,” Boulter said. “If you look at annual average rainfall in Iowa, you see it increasing about an inch per decade, which is pretty substantial.”

Additionally, adding all of these factors together can cause flooding, which Boulter said is only exacerbated by the fact that Iowa is bordered by two major rivers.

“Finally, when you put it all together, then you get flooding,” Boulter said. “This year, Iowa had some catastrophic floods. Century level floods. There was a lot more really heavy rains in the springs, but those came on top of some record snowfall in the upper Midwest. The west border of Iowa is the Missouri river and the right border is the Mississippi river, so Iowa is contained by two of the most important rivers in the entire United States.”

This type of extreme flooding can have an extreme impact on a society, Boulter said, which can take a toll on a society both environmentally and socially.

The Iowa study, Boulter said, was meant to stimulate conversation to make changes in policy, which he thinks is the most efficient and effective way we will be able to slow down the impacts of climate change.

“The purpose of the study was to really amplify the conversation. The goal was to start introducing this research to policy leaders. You hear this all the time how we should be driving more efficient cars, or we should ride our bikes. These are all good, but we’ve been saying that for decades, and there hasn’t been that much progress. In the end, it’s not the change that we need. So yes, policy is needed.”

UW-Eau Claire geography professor Doug Faulkner, a studier of climate change and familiar with Boulter’s research, also said that he believed this type of research and evidence will be necessary to evoke the type of change within policy leaders and communities needed to substantially affect climate change.

“Saying the climate is changing and all these bad things are happening is not going to lead to any action,” Faulkner said. “But when it becomes clear from data that these changes are happening and there are impacts from these changes, then there is a basis for people to get motivated for making change. I think research on climate change is essential.”

As for the future, Boulter says that depends on when we choose to act out against climate change.