Following in their footsteps 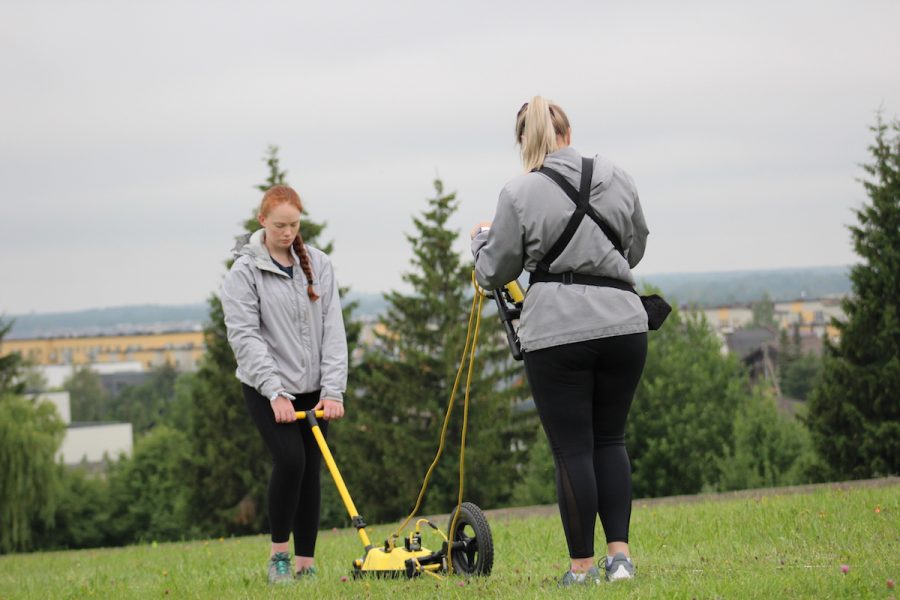 Editor’s Note: The author of this article was an active participant in the research being described.

At first glance, Fort IX – in Kaunas, Lithuania – appears to be an ideal place for spending a leisurely afternoon.

When the weather permits, children can be seen playing and climbing on the distinct hills and unusual structures. Young tourists laugh and participate in full-fledged photoshoots in front of the towering sculptures on the grounds. Newlyweds pose for a photographer, on the happiest day of their lives, in the middle of a wide-open field.

But looks can be deceiving.

Those hills sit atop an old fortress, and those unusual structures are gun turrets. Those three towering sculptures are designed to memorialize the people who lost their lives to the Nazis. That open field is where around 50,000 people were executed, burned and buried.

For a few days in July, this was also the work site of UW-Eau Claire student researchers – students working on an archaeology research project.

Fort IX was originally constructed for military defense in 1903 by the Russian Empire. In 1915, the fort fell under German occupation during World War I. Three years later, Lithuania regained control over the fortress, repurposing it as a hard labor prison.

In 1940, the Soviet Union took control of Kaunas and Fort IX, once again repurposing the fortress into an intermediary station for transferring political prisoners.

On June 22, 1941, the Nazis occupied Kaunas and the fort. From 1941 to 1944, Fort IX functioned as a mass extermination site for local Lithuanians and people from countries like Poland, Austria, France, the Soviet Union and Germany. Men, women, and children were shot and buried in 14 trenches on the grounds.

By 1943, the Nazis knew they would soon lose control over Kaunas. In order to hide any traces of genocide, the bodies of the victims were exhumed and burned.

First excavation was in 1944

In 1944, the site was excavated for the first time for forensic purposes. Soviet archaeologists dug up each of the 14 burial trenches and exhumed any remaining human remains as evidence to be used in the trials of the Lithuanian-Nazi collaborators.

Since then, two or three reincarnations of the Kaunas Ninth Fort Museum have been constructed on the site. However, it was not until 1959 that the Soviet Lithuanians launched their first thorough Holocaust excavation of the 14 trenches.

There is another significant fact to note about these particular excavations, said Professor Richard Freund, director of the Maurice Greenberg Center for Judaic Studies at the University of Hartford and lead archaeologist of the current project: most of these archaeologists, including their lead, were  in fact women.

“That is the first example I have ever found of systematic Holocaust archaeology in the field,” Freund said in a previous interview. “And the fact that it’s being done by women is very important.”

The women of Fort IX

From 1959 to 1971, these archaeologists dug and excavated trenches coinciding with the 14 burial trenches dug by the Nazis years prior. Their work was documented in a series of field journals written and signed only by women, which listed some of their findings, names, schedules and daily wages.

There are also photographs of the women working, which, according to Freund, is very rare when it comes to older Holocaust excavations.

“The fact that we have women in the ‘50s and ‘60s doing these excavations – not just supervising, but we see them lifting the shovels and doing the work – that tells us a lot about what the Soviets were doing,” Freund said.

The group was led by Julijana Menciuniene, who was in her twenties when the excavations began. Today she is in her eighties and still resides in Kaunas, though she was unavailable for an interview.

Freund said the credentials of Menciunjene and the other archaeologists are unknown, as is their overall mission behind the physically-demanding work – though it can be assumed that the dig was coordinated by the museum director.

One theory is that the workers were archaeology students from the university located in Kaunas. Nothing more than a bachelor’s degree in science was needed to do archaeological work at the time, Freund said.

Freund also said there is no clear explanation as to why a majority of the archaeologists at this site were women. According to  Antiquity, an archaeological journal, there were many women professionally involved in Soviet archaeology, but they typically worked as assistants.

“Occasionally, however, women managed to become expedition leaders and a few women were awarded doctoral degrees,” the article said. “Examples of women taking senior positions in academic institutions or periodicals were extremely rare.”

Freund offered some potential explanations for this female dominated archaeological team. The Soviets may have viewed the situation as an opportunity for women to break into the forensic archaeology field. More women may have taken the job out of necessity after college. Men may have simply considered the work too menial for them.

The 1944 forensic excavations of the site also heavily featured female workers. Freund said this may have functioned as a form of propaganda, depicting the work as gentler and more compassionate, rather than “just another Soviet military action.”

According to the field diaries written by Menciunjene, all of the participating archaeologists were paid $8 for every week day they worked. Those who worked on Saturdays were given $6.

According to an article in an Ohio State University publication, women in scientific fields today earn an average of 31 percent less than their male colleagues a year after they graduate.

During the years of field work, hundreds of items were collected from the burial pits, including buttons, eyeglasses, belt buckles, coins, articles of clothing and even human remains.

Initially, the artifacts remained in museum storage as the pieces in better condition cycled through the displays. The human remains underwent forensic anthropological examinations before sitting on display briefly in the earlier years of the museum’s existence.

Today, most of the artifacts remain in the museum’s archives, with only a few remaining available for public viewing. Officials at the Fort IX museum claim they do not know the current whereabouts of the human remains that were collected by the Soviet archaeologists, Freund said.

While archaeology and other sciences remain male-dominated fields, women are a fixture of the work sites still active today.

Following in their footsteps

Two UW-Eau Claire geography students followed in the footsteps of Menciunjene and her female colleagues at the very site they excavated decades ago.

Martin Goettl – a geospatial technology facilitator within the same department – was also part of this year’s research team along with two male geography students, a journalism student and a male UW-Eau Claire geography graduate.

This Eau Claire team has used ground penetrating radar to examine the subsurface at known or suspected Holocaust sites all around the country – including the Kaunas Ninth Fort Museum.

GPR is noninvasive machinery that sends electromagnetic and FM radio waves into the soil from two antennae. The waves reflect off substances of various compositions and bounce back toward the antennae at different frequencies. Those frequencies are then translated into images on a screen that allow geoscientists to detect any unnatural breaks or obstructions in the stratigraphy.

At Fort IX, Jerviss, Jefferies and their team aimed to use GPR to map the 14 burial trenches accurately.

“It’s a cool experience to be using the newer technology and – on top of that – being a girl,” Jefferies said. “It really marks our place in history. Hopefully, women can build off of what we’re doing”

Both of the women said in an interview that they entered the geographical field because of their interest in conservation. While Jerviss said she has done previous field work on school trips, Jefferies said she had never participated in field research before. Both said the tools they used were completely new to them.

While both women agreed that their time in Lithuania has provided them with information and experiences they never would have received elsewhere, they also noted some of the struggles they faced being women in a male-dominated environment.

“Even on this trip, it’s kind of nerve-wracking being a girl, because it seems like (men) are more dominant than (women) sometimes,” Jerviss said. “And they kind of just take over, so it’s hard for us to speak up and speak out.”

Jefferies agreed with this sentiment. She said she feels as though the women in this situation tend to be taken for granted or “pushed to the side” and that her thoughts and opinions tend to be overlooked. Male students are assigned tasks and roles first, leaving the women with whatever is left over, she said.

“I think all of us (women) felt discouraged many times with this group – this year and last year,” Jerviss said, “but you’ve just got to keep trying.”

Last year, four UW-Eau Claire students were brought to Lithuania for field research; two men and two women. However, neither of the women were geography students.

Despite these frustrations, both Jefferies and Jerviss offered words of advice for any women who might follow in their footsteps.

They said women in STEM fields should speak up more and make themselves heard. Both said the fields might feel more accommodating if more women would get involved in this sort of research and work hard to prove that “women can do just as much as men.”

“It’s good to have more women,” Jerviss said. “And hopefully, in the future, more women – hopefully more women than men, sometimes – or even just an equal balance, would be nice.”