Projects will continue through September 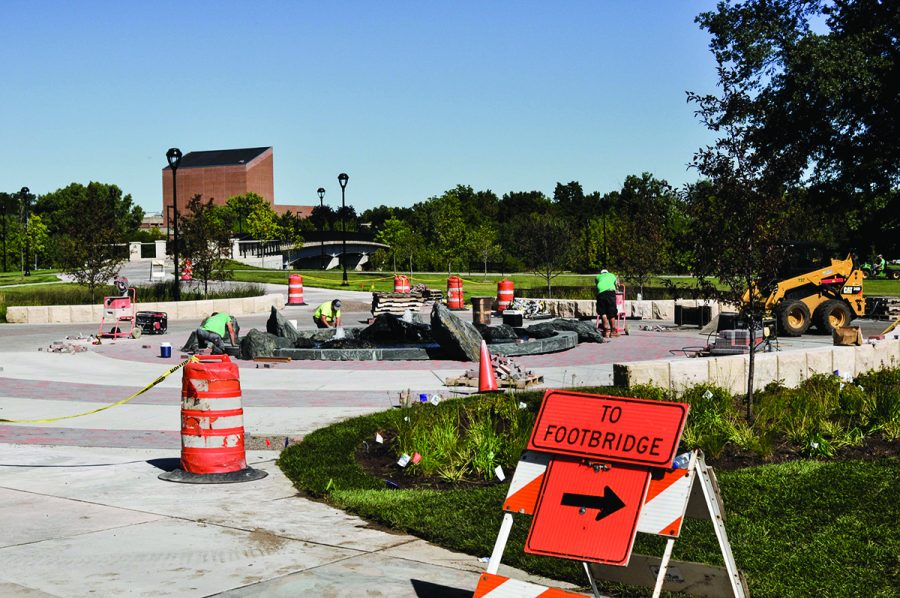 Construction continues on the UWEC campus with a fountain as the newest addition.

The city of Eau Claire still faces ongoing construction despite the new school year starting  on Sept. 4. With several projects underway as of this past summer, residents and students have had to adapt to the detours all over town.

University Police Chief Jay Dobson in a recent press release stated that the State Street construction project will last through at least Sept. 27.

“Those traveling to and from main-lower campus,” Dobson said, “will be limited to routes via (1) Park Avenue, either to or from Summit Avenue, and (2) State Street, either to or from the east driveway of the Hibbard parking lot.”

Dobson also encouraged students to carpool, take the bus, walk or ride to campus, as this will decrease the flow of traffic around campus. He said he will provide campus-wide updates as new information comes in.

The Lake Street bridge is now open to the public after it was shut down for two months. The bridge has moved from four lanes down to two lanes and additional bike paths now traverse the bridge both east and westbound.

“So many students — including myself — rely on their bikes to get around the city of Eau Claire,” Lizzy Keena, a third-year nursing student, said. “I think it was a change that needed to happen, and a lot of students will appreciate it. I know I do.”

Keena also said the State Street construction has been a huge inconvenience for her, causing her to be late to work several times in trying to navigate the detours this past summer. Keena said she is excited to get back to being in the classroom.

Amber Harris, a recent UW-Eau Claire graduate and current employee at Mayo Health Systems said soon-to-be roundabouts will be “a great addition to the student area. It will reduce the number of possible accidents.”

Harris said she has seen many drivers who are unfamiliar with the intersection on top of the State Street hill.

“The right of way is not typical with how normal four-way stops are and many times people are hesitant and visibly unsure at who is supposed to go first,” she said.

The Eau Claire government website has provided images of what the State Street construction will look like once it is completed, as well as current and future construction projects throughout the city.

The university has also been under construction this summer with the addition of an archway by Hibbard Hall, a fountain outside Schofield Hall and new housing on upper campus — The Suites.

Keena said she has been very happy with the additions on campus.

“I think both the fountain and archway are a nice addition to the already nice-looking area.”