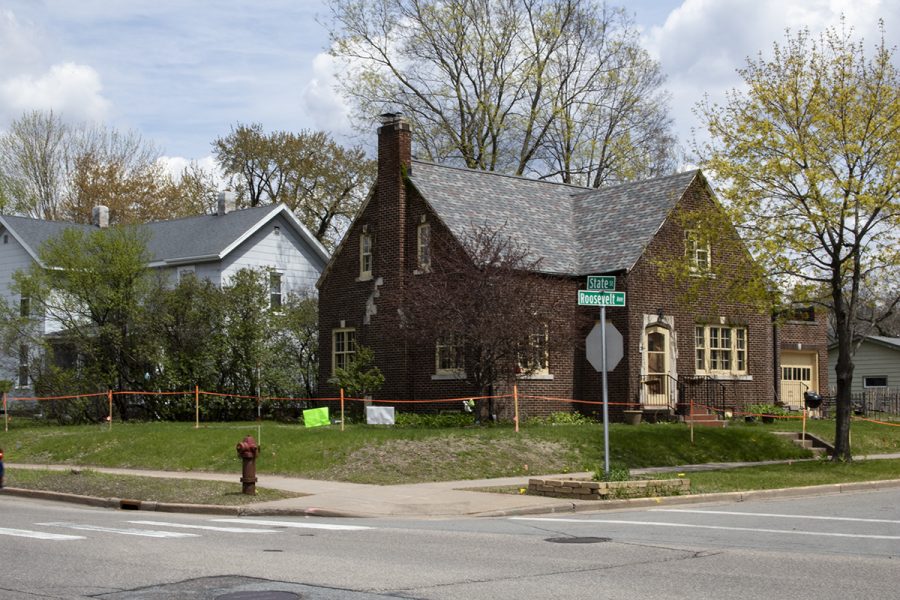 Orange tape marks the outline of the land that would need to be purchased by the city of Eau Claire if plans for a roundabout at the intersection of State Street and Roosevelt Avenue were to move forward.

On each of the four corners of the State Street and Roosevelt Avenue intersection, a house sits on a small plot of land adorned with small gardens and the flowering trees of spring. This location has become a topic of debate due to Eau Claire city council plans to construct a roundabout at this intersection.

On March 12, the Eau Claire City Council approved an amendment to explore the addition of the Roosevelt traffic circle. This approval left many Third Ward residents, the neighborhood in which the intersection sits, questioning whether a roundabout was truly the best course of action due to the effects it may have on the homeowners whose land would be sold to make room for a roundabout.

Andrew Werthman, a member of the city council, said the idea to put in a roundabout stemmed from safety issues regarding the current setup of the intersection, which he said can be dangerous for both pedestrian traffic and for motorists to turn onto.

“The biggest issue in that location is the speed,” Werthmann said. “The speed of cars going through the intersection and the fact that we’ve had over 25 people struck, whether pedestrians or cyclists, by cars at high speeds in that exact location.”

Roundabouts force drivers to slow their speed by 8-15 miles per hour, Werthmann said. The survivability of a struck pedestrian is much higher, he said, when speeds are reduced.

A study by the UW-Madison Department of Engineering Professional Development found that while roundabouts typically increase the number of crashes that occur, the amount to result in injury or death decrease by 40 percent.

After the amendment was passed to begin exploring the possibility of a roundabout, many members of the Eau Claire community, especially residents of the Third Ward, responded negatively and have since created petitions against its construction.

For Eric Torres, an education professor at UW-Eau Claire and newly-elected Eau Claire school board president, the suggested roundabout is personal.

Torres lives in one of the four houses whose property would be affected by the roundabout. He said he understands the reasoning behind the city’s consideration of a roundabout, but feels it would ultimately create an unsafe and unfair living situation for the four corner houses.

“I think that it would increase a level of stress that doesn’t exist right now,” Torres said. “The noise and the lights in the night will affect daily life and the quality of life. The distance between the roundabout and the properties is just too short.”

Janet Driever, a communication and journalism professor at UW-Eau Claire and resident of the Third Ward, said she believes the safety of the homeowners were not considered in this plan.

“One of the families has five kids, three of whom have disabilities,” Driever said. “The roundabout will be outside their house, middle of the night. It brings home the fact that if safety is their issue with pedestrians and traffic, the people that live there will be impacted the most.”

Driever and Torres both said members of the Third Ward were surprised with the news the city was considering a roundabout first came to light, as the city engineer who had analyzed the intersection had originally suggested the installation of a traffic island and electronic signs which would display drivers’ speeds.

“We felt manipulated by the city council in what was first recommended,” Driever said. “All of a sudden their plans turned into a roundabout. This wasn’t what the engineer suggested, or what the third ward thought was being voted on.”

None of the four property owners are willing to sell their land to the city and allow the project to move forward, Torres said. Several petitions have been created with a goal to stop the roundabout project, and Driever said many residents are planning to attend the next June city council meeting and voice their opinions.

The number of complaints was surprising, Werthmann said, because at the time of the March decision they had the support of UW-Eau Claire’s student senate, the official city commission and the majority of the steering committee. These negative responses have prompted city council members to reconsider the intersection plans.

“From my perspective,” Werthmann said, “because of the number of neighbors who oppose it, we don’t need to do a roundabout there. But I still want to see the intersection become safer.”

Werthmann said there are a number of factors which he believes are most important to consider when finding a different solution. Most importantly, he said, cars need to be slowed down. In addition, he said, there should be a safe way to turn onto State Street, it should be safe for cyclists to maneuver, it should be friendly for pedestrians and it should fit the character of the neighborhood.

“However we do the design of this, it’s got to do those things,” Werthmann said. “The traffic calming island that was proposed wouldn’t have done those. It wouldn’t have helped with speed reduction or on and off access.”

In June the city council will vote on whether or not the city will pursue a relocation order, or an official request to ask the neighbors if they’re willing to sell the land.

If this passes, and the homeowners decline the offer, the city could consider eminent domain, an action Werthmann said has not been brought up. The council may also vote down the order, Werthmann said, if they decide not to continue pursuing the construction of a roundabout.

“It’s super important for folks to realize the decision-making of this intersection is something that has to be inclusive of all street users,” Werthmann said, “recognizing this is a community road. It’s used by pedestrians, cyclists and people across the entire community. How we design it has to take that all into account.”