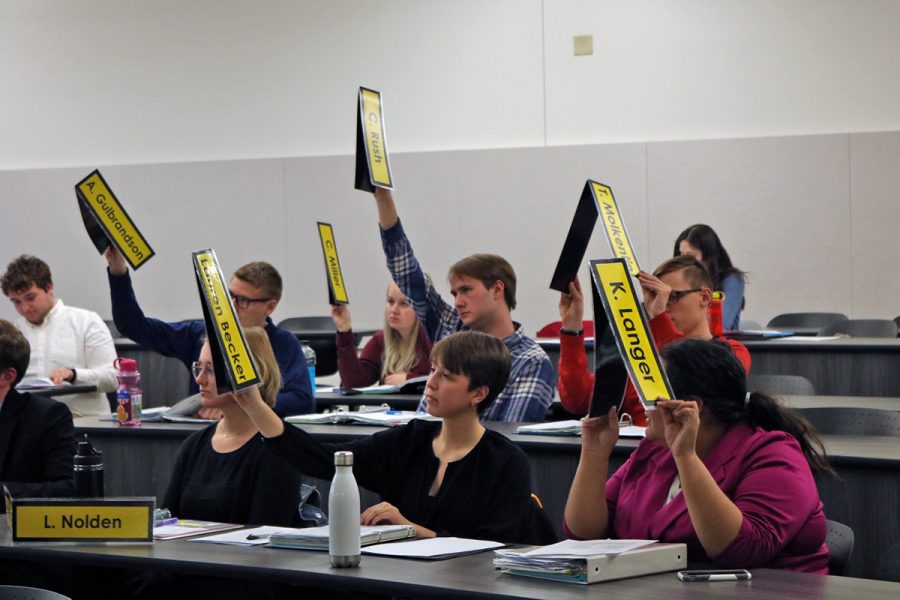 Senator Joe Murphy, the author of the bill, said a survey was administered to Haymarket Landing, Chancellors, Priory and Aspenson Mogenson halls. According to the resolution, over 300 students were polled about the Dead Hours policy, which requires students not be heard from the hallway during finals week.

The resolution states that over 90 percent of those students and all Resident Assistants responded that they were “in favor of relaxing or removing the Dead Hours policy.”

Senator Carter Rush said he would have liked to see the resolution passed by the Residence Hall Association first, but he was glad to know they were consulted.

“I think this is still a big step forward,” Rush said.

Senator Kayde Langer spoke against the resolution, citing her disappointment in it not passing through RHA before being presented to Student Senate.

“The fact that it wasn’t is very disappointing and an overreach of RHA,” Langer said.

Senate passed a resolution in support of creating opportunities to allow incoming students on Student Senate.

The current election structure does not accommodate seats for incoming students — first-year, transfer or nontraditional students — for the fall semester.

RHA Liaison Travis DuChene spoke in support of the bill.

“I think this is a good resolution that points out a problem that we have with our current Senate system, because our job is to represent all of the students on campus, and I don’t think that should be exclusively second-years and up,” DuChene said. “I think we should be including first-year students.”

Senator Ted Molkentin spoke against the bill. Molkentin said he wanted to be a Senator as a first-year student, and went through an interview with the Vacancy Committee, but was unsuccessful. Nonetheless, he still wanted to be involved so he joined two commissions.

“I think that spoke to my credibility as wanting to become a leader here,” Molkentin said. “My thought is that if the students want to be involved, they will find a way to get involved.”