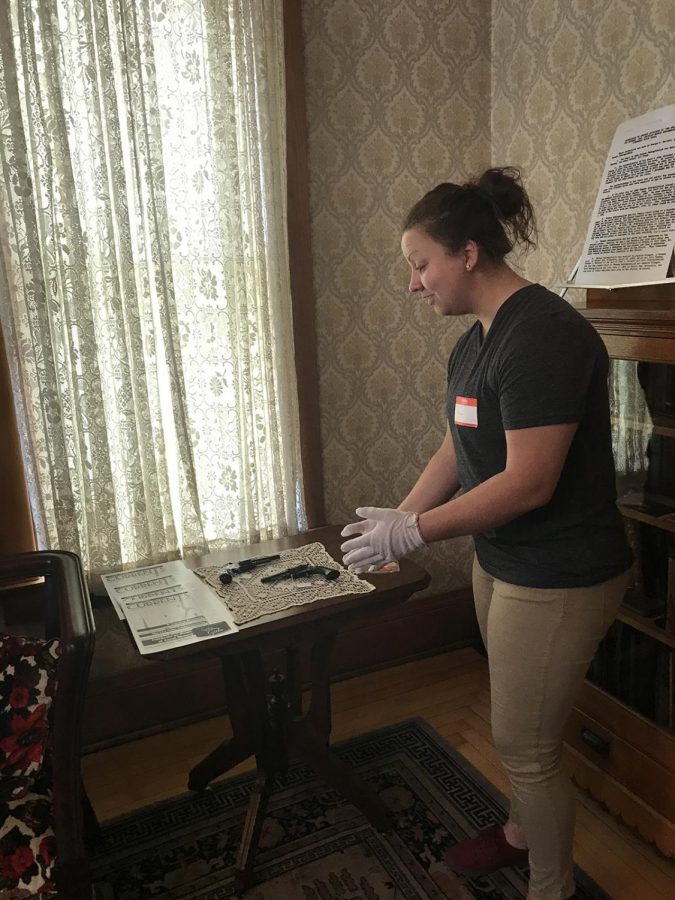 Madeline Jagodzinski, a student in John Mann’s public history course, speaks about the Schlegelmilch guns during the tour inside the historic Schlegelmilch House.

Nestled into a corner of a downtown Eau Claire parking lot at the corner of Farwell Street and Lake Street sits a nineteenth century brick house, complete with a small garden perimeter. This property housed the Schlegelmilches, a German family who first moved to the area in 1853 and opened up a successful hardware and gun store.

Throughout the spring semester, students in John Mann’s public history senior capstone course worked to research the Schlegelmilches and put together an exhibit entitled “Guns, Bikes and Women: Unconventional Tours of the Schlegelmilch House.” Their tours allowed for visitors to work their way through the house and learn about the different aspects of life in the Schlegelmilch house and the Eau Claire community.

Mann said that since he first came to Eau Claire in 2003, the Chippewa Valley Museum has been trying to think of ways to breathe new life into its historic house museums. Together, they thought of the idea of producing thematic tours within the house where visitors can learn not only about the Schlegelmilches, but about the history of Eau Claire.

“So what we thought we would do is look at themes associated with the family history that would allow the museum to interpret different periods in time and different topics,” Mann said. “And so now we have a new content.”

Mitchel Orlovsky, a graduate student studying public history, was a part of the group that studied guns. Herman A. Schlegelmilch, he said, not only owned a gun shop where he manufactured his own guns, but was also a member of the Schützenverein, a German shooting club. He said Schlegelmilch’s business helped to bring together the Eau Claire community.

“Within our group we were able to discuss the Schuetzenverein, a German club that hosted events like balls and dances at Schuetzen Hall, in the Schuetzen park,” Orlovsky said. “The comm during that time said it was the place to be on sundays.”

For Orlovsky’s portion of the house tour, his group put together a poster with three different panels in which they discussed Herman A. Schlegelmilch and his involvement with gun manufacturing and the Schuetzenverein. They had guns on display, lent by the Chippewa Valley Museum, which constituted their interactive portion of the display.

Each group was tasked with researching their subject and finding a way to make it interactive.

The group who researched Herman A. Schlegelmilch’s son, Herman F. Schlegelmilch, focused on his interest in bicycling. For their portion, they directed a bike tour throughout historic sites in Eau Claire, and spoke about the cycling craze of the late 1800s.

The group tasked with researching women, Mann said, chose to have a dramatic reading of a play UW-Eau Claire students wrote in the early 2000s based off of excerpts of correspondence between the women who lived in the house.

A fourth group, made up of graduate students, researched and put together a tour for the historical Ager House, where Waldemar Ager, a writer and editor of a Norwegian newspaper, and his family lived. Mann said that portion of the tour will focus on the prohibition, as the newspaper Ager ran worked to promote it.

Mann said the point of the project is to not only get students comfortable with local archival research and putting together their information into a shareable format, but also to prepare them for the careers they may seek out.

“There are a whole bunch of careers that are filled by historians who are not sort of traditional classroom teachers,” Mann said. “And that’s what the students are interested in doing when they grow up, many of them. So this gives them that real world experience.”

While the first round of tours is over, garnering over 60 visitors, tours of the Schlegelmilch House will again be offered on May 5 from 1 to 4 p.m., with the free bike tours leaving the house at 2 p.m.

Admission to the house costs $5 for adults and $2 for children and students, but is free for Chippewa Valley Museum members. The Ager House tours will run from 10 a.m. to 2 p.m. on May 11.