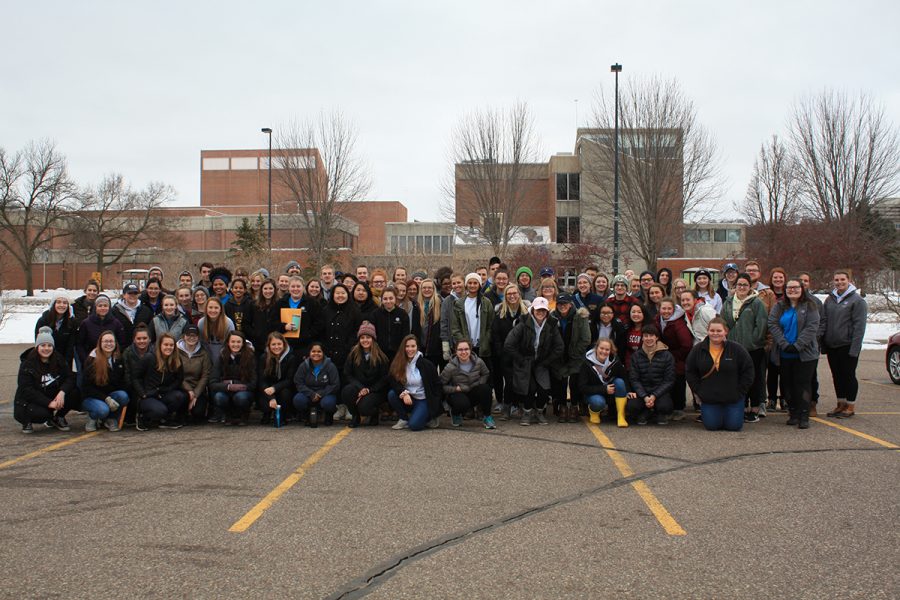 Around 100 volunteers participated in Global Youth Service Day on Saturday.

About 100 UW-Eau Claire students came together on Saturday to take part in the Global Youth Service Day, an event where students provided services to different Chippewa Valley area nonprofit organizations.

The event, sponsored by the AmeriCorps ECLIPSE group, took place at locations that included the local humane society, Beaver Creek Reserve, Hope Gospel Mission and Irvine Park. The students met on Water Street at 8:30 a.m., where they split up into groups designated to each of the different locations.

Madyson Studenec, a second-year communication sciences and disorders student, is one of the volunteer coordinators for ECLIPSE. She said the organizations dictated what they wanted to have the students do based on their seasonal needs.

“We called and asked if they needed any projects done,” Studenec said, “then had them fill out a form asking what they’d like done and assigned volunteers to the sites.”

Dana Jondle, a third-year unified early childhood student, has worked at ECLIPSE for two years as a part of the childcare centers team. She spent Global Youth Service Day helping out as a team leader. It was her responsibility to get her team of volunteers to their designated location, and then figure out what needed to be done at their site.

The team spent their day cleaning out the recreational facilities at Irvine Park, and scrubbed the floors and bathrooms of three buildings. Originally, Jondle said, the Irvine Park worker wanted the group to rake, but had to revise his plan after the week prior’s snowstorm.

“When we were done, the guys at Irvine Park let us go see behind the zoo area,” Jondle said. “It was super cool to get to see the animals.”

When all of the ECLIPSE teams were done working at their respective locations, they headed back to campus to enjoy a free lunch together and reflect on their experiences.

Each year ECLIPSE runs two events in which they recruit volunteers from around campus. Studenec said they do so in order to meet performance measures for an AmeriCorps grant that states the group must recruit 175 new volunteers each year.

In order to recruit volunteers for Global Youth Service Day, Studenec said, they sent an email out to the entire campus about the event. Informational ads were also placed in several area publications. In addition, ECLIPSE members were encouraged to bring their friends and family along to aid in volunteer work.

Jondle said the biggest takeaway from her experience in ECLIPSE is the impact one person’s actions can make on a community.

“Even though we think reading a book to a child doesn’t do a lot, it does,” Jondle said. “It’s really important to be out in communities making an impact.”

Studenec echoed Jondle’s thoughts, saying she hopes the students who participated can see how impactful their services can be.