Berlye Middleton considers the symbolic significance of being a bridge in the past, present and future 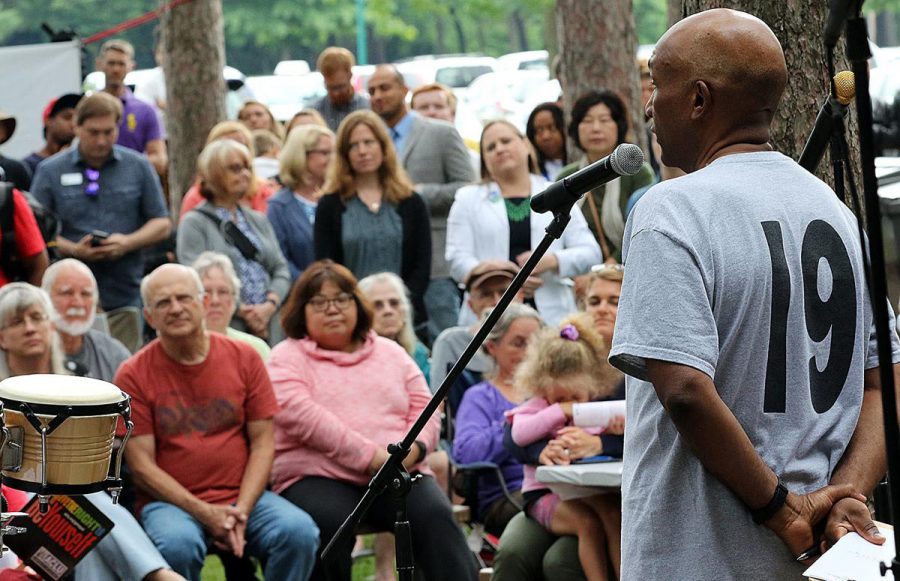 Throughout his life, Berlye Middleton said, he has been a bridge. Having served as the first African-American elected to the Eau Claire City Council, worked as an equal opportunity officer in Kosovo with the 157th Maneuver Enhancement Brigade and being the current president of Uniting Bridges of Eau Claire are just a few of the roles that represent how Middleton has embraced this symbolic metaphor.

“A bridge is a connector between one spot that is a destination to another spot that is a destination,” Middleton said. “Regardless of race, creed or color, regardless of how we have experienced life, we still have a certain amount of humanity that is within us. We want to make sure that there’s this bridge that connects people to the human sides of ourselves, not necessarily the racial side.”

Before moving to Eau Claire, Middleton grew up in Milwaukee. It was there, he said, that his dream of going to college was planted.

He initially attended a predominantly white institution called Riverside University High School. With this goal in mind of pursuing a college education, Middleton said he engaged in what would now be considered “school choice,” although it was not an officially offered opportunity at that point.

For a year, he would get up at 5 a.m. to commute to Riverside because he lived in the North Division of Milwaukee and the school is located in the East Division.

“I had heard that lots of students were dropping out at North (Division High School),” Middleton said. “I was so eager to get to college, I didn’t want anything to stop me.”

The following year Middleton transferred to North Division High School, where he had a simpler commute and attended, as he said, a great institute.

Middleton said his dedication to attending college persisted even after a faculty member of North Division suggested he take a different route.

“My guidance counselor at North Division — I don’t think he was trying to be … racist, but he basically indicated that I was a good student and they were hiring at the foundry,” Middleton said. “He was thinking more in terms of the reality from what he saw from his perspective, and that was … a long shot.”

He eventually went on to Carroll University, where Middleton said he was one of about five African-American students who were in his class, and one of two who officially graduated from the college.

Middleton said he found that his instructors at Carroll had broader perspectives of the world and human relationships.

“There, I met professors who had much greater worldviews,” Middleton said. “They had a much better understanding of human interactions. Whether it be racism, whether it be discrimination, whether it be just of their treatment, I found that it was not just applicable to African-Americans, but there was discrimination going on within ethnic groups.”

Those professors, Middleton said, allowed him to visualize and understand the significance of a bridge as a uniting symbol between groups of people.

“I did see that bridge,” Middleton said. “I did see how to make those connections, those minute, but distinctive connections between respecting another group and how to respect that group.”

Middleton proceeded to graduate from Carroll and later moved to Eau Claire for a position at Luther Hospital to develop an alcohol and drug abuse program.

Selika Ducksworth-Lawton, a history professor at UW-Eau Claire, said one of Middleton’s central priorities is bridging racial difference and that he is, and has been, one of the most important figures in the Eau Claire community.

“He’s one of our most powerful city councilmen and black leaders,” Ducksworth-Lawton said.

She also works with Middleton in Uniting Bridges, as she is the vice president of the nonprofit organization. Uniting Bridges, which hosts celebrations for Juneteenth and Martin Luther King Jr. Day, was established three years ago as the result of Middleton’s advocacy, Ducksworth-Lawton said.

Middleton was originally a part of a racial justice task force that was created in response to discriminatory instances occurring on the UW-Eau Claire campus and in the surrounding area.

“There were instances of, at the university, minority students complaining about being in the community, and they were being harrassed,” Middleton said. “Many were coming from other parts of the country where they recognized discrimination … and when they came to Eau Claire they certainly didn’t anticipate it, but … it was very subtle.”

The City Council had funded the racial justice task force at first, but when they ceased funding, Middleton said the organization was no longer able to exist. However, he and other members decided they would not be discouraged.

“We heard from the community … (and) we decided we would continue on and have to become self-funded,” Middleton said. “Just because the City Council will not fund us, doesn’t mean it’s not a good idea. We now have to rely on the community; and the community stepped up.”

Ducksworth-Lawton and Middleton then joined forces to create Uniting Bridges, which Middleton described as an umbrella organization for minority groups in the Eau Claire community that offers support by having leaders and individuals to go to if they encounter issues.

Dale Peters, the city manager of the Eau Claire City Council, has worked with Middleton for Juneteenth Celebrations and Uniting Bridges, and said Middleton embodies the concept of building bridges.

Middleton now works as a director at the Department of Corrections in Eau Claire, but aspires to continue uniting groups of people in the community by involving younger generations.

“My future involvement with Eau Claire would be to … continue on with some of the activities I’m already doing,” Middleton said. “The second thing would be to engage some of the schools and some of the younger people, because I’m a believer that children … are our future. I don’t prescribe to any great position within the city, but to stay within the grassroots and to see those seeds growing.”