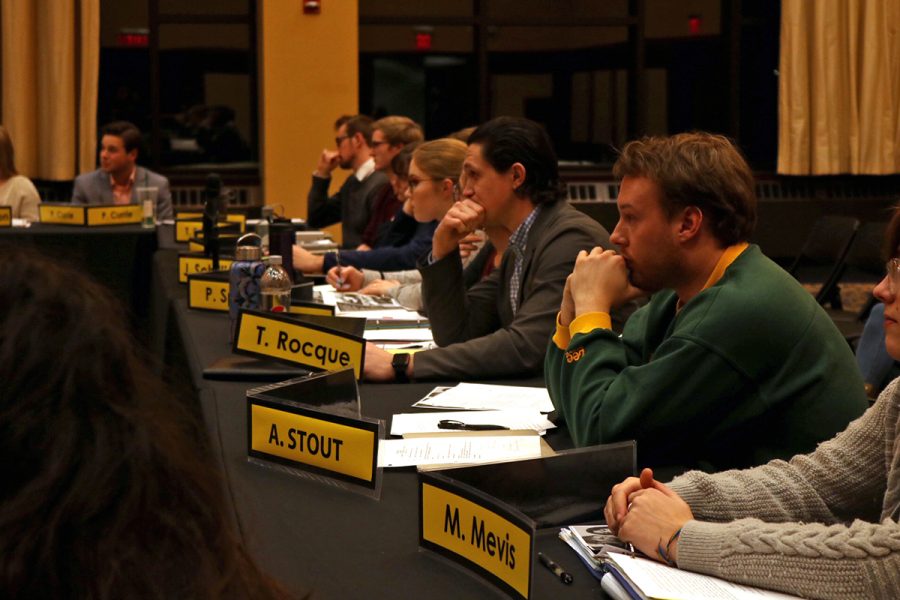 The meeting started off with a presentation by Jake Wrasse about the issues of Phillips Hall and the new Science and Health Sciences building project.

Student Senate passed a resolution on Monday in support of the new Science and Health Sciences Building project, which would replace the ailing Phillips Hall.

The SHS building project is included in the UW System’s capital budget proposal, which will be deliberated by the state legislature this year. The project would cost $256 million total, calling for $109 million in the 2019-2021 state budget and $147 million in the 2021-2023 state budget.

Phillips Hall, built in the 1960s, has been home to several issues for students who use the building for academics. Of the nine academic buildings on campus, Phillips Hall accounts for 34 percent of annual work orders.

Leakages are common from structural damage and pipes bursting. Equipment in the hall is covered nightly to protect against water and bug damage. The building’s ventilation system is also obsolete, and infestation issues from bugs to bats and mice persist.

The space itself is also inadequate to 21st century academic needs, proponents of the new building say. Former closets and hallways have been converted into storage or research space and heavy equipment must be limited to the first floor.

Renovation of Phillips Hall has been rendered inefficient for several reasons. Among them is installing a new HVAC system would lower floor-to-ceiling heights to 6 feet.

Construction of a new science hall would not only bring more efficiency, but it would open doors for UW-Eau Claire to expand the health industry in Northwest Wisconsin. Plans suggest expanding the BSN program to UW-Eau Claire — Barron County to fulfill the demand for nurses in the rural region. In line with its partnership with Mayo Clinic Health System, the university intends to develop a Biomedical Engineering program as well as a bioinformatics program.

Mayo Clinic will invest $13.7 million in private funding for the proposed SHS Building for research space.

The building is expected to be completed in six and a half years and will be built on the site of the existing Putnam and Katherine Thomas Halls.

“An important thing to consider with this too is that even though a lot of the work and lobbying is being done at different levels of the university, the student voices are ultimately the key piece of this whole project,” Chief of Staff Hillary Smith said.

Senator Kayde Langer was not in support of the resolution, however, and voted it down. Langer said she was troubled by the university’s lack of plans to replace the residence halls on lower campus to accommodate students with disabilities.

“I want to support this resolution, but at this point, I cannot based on the fact that there’s no set plan on accessibility for people who have disabilities,” Langer said.

Members of Senate will lobby for the SHS Building project in a few weeks in Madison at the Rally for Excellence.

Senate also passed a resolution in support of continuing the tuition freeze for resident undergraduate students.

Tuition has been frozen for the past six years, which keeps it affordable for students but strains universities as they search for alternative funding options. In 2015, the UW System experienced a $250 million cut in funding. Two years later, it was announced that $100 million would be reinvested.

Senator Sprink spoke in support of the resolution.

“I think that the tuition freeze is essential for keeping tuition low,” Sprink said. “However, we have to remain vigilant and not allow any more cuts to come to our education funds due to government. If we do not fund this freeze, our universities won’t have the resources that they need to survive.”

Peter Currie, the finance director, spoke against the resolution.

“Tuition is bound to go up eventually, and if it doesn’t go up now, and you freeze it, it’s just going to go up more dramatically as time goes on,” Currie said.

Senate passed a resolution in support of Black History Month