Relationship between popular culture and politics is examined 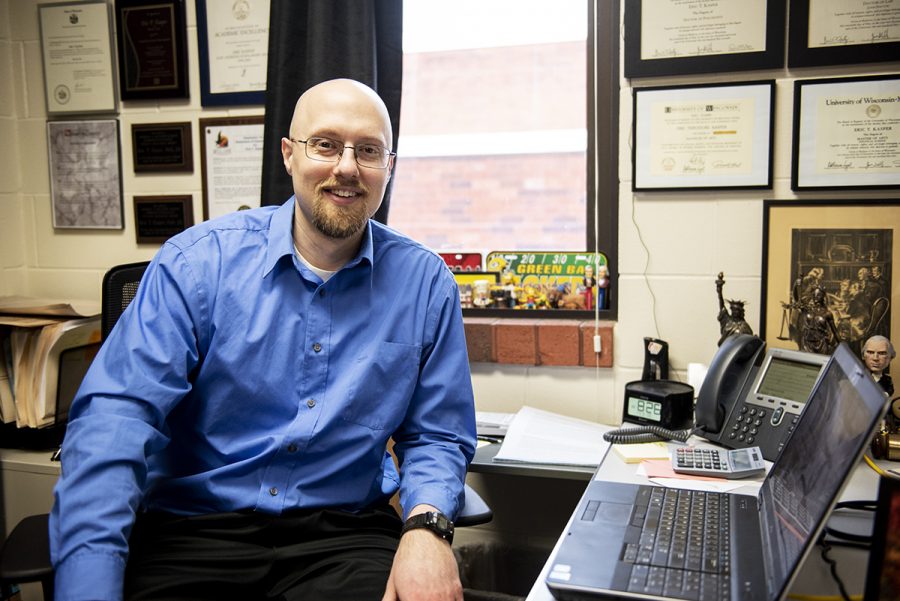 Eric Kasper, associate professor of political science at UW-Eau Claire, says “what politicians do and what lawmakers do certainly affects what goes on in the creative sphere.”

According to Eric Kasper, associate professor of political science at UW-Eau Claire, music, films and various other mediums under the category of pop culture are influential in nature.

Concerning this relationship between popular culture and its impact on audiences, Kasper has analyzed this bond in relation to the concepts of politics and law in two books, published in 2018, that he contributed to.

The most recent book, “You Shook Me All Campaign Long: Music in the 2016 Presidential Election and Beyond,” discusses the role that music played throughout history and in the 2016 presidential election, and considers how the role will continue to proceed into the upcoming 2020 election.

The second book, “The United States Constitution in Film: Part of Our National Culture,” considers the Constitution’s portrayal in films, the extent of how accurate those portrayals are and how, in turn, viewers’ interpretations of the Constitution are affected.

Regarding his decision to participate in these projects, Kasper said, for “You Shook Me All Campaign Long” — which he co-edited, wrote one chapter and co-wrote the introductory chapter — he was compelled to pursue the topic following his realization that music was becoming more significant in the 2016 election.

“I came to realize during the 2016 presidential election that music was taking a more prominent role than it had been,” Kasper said. “This spurred me to get in contact with my former colleague, Benjamin Schoening, who is a music professor, and the two of us thought there would be interest among scholars and the public in a book that examined songs and musicians in the 2016 election.”

However, beyond that initial motivation to pursue this book, Kasper noted that popular culture, in the form of music and musicians alike, can establish a certain energy for campaigns and influence how the campaign is perceived.

“Music itself is selected by a campaign,” Kasper said. “In essence, based on decisions made by candidates, music can have a significant influence. Musicians themselves can have an influence over what happens in a campaign, based on whether or not they will decide to endorse a particular candidate, or if the candidate has used their music as a result of permission, or in ways that they don’t like; and if musical artists are to object, it can generate negative publicity for the campaign.”

“For Democratic candidates, you see in particular, Bruce Springsteen, whose music has been used on a number of occasions by different democratic nominees,” Kasper said. “He’s played at a number of their rallies. On the Republican side, in the last couple of elections in particular, you’ve seen Kid Rock come out and be supportive or have his music be used by Mitt Romney in 2012 and then again by Donald Trump in 2016.”

In the second book, “The United States Constitution in Film,” which Kasper co-authored, he said inspiration spurred from a course he co-taught with his fellow co-author Quentin Vieregge, an associate professor of English at UW-Barron County. Their class analyzed films and their portrayal of courts, but because there were already several books discussing that topic, Kasper and Vieregge decided to examine film portrayals of the constitution instead.

Between “You Shook Me All Campaign Long” and “The United States Constitution in Film,” Vieregge and Kasper both said popular culture can influence its audiences and how they perceive politics and law, but the influence travels circularly.

“What politicians do and what lawmakers do certainly affects what goes on in the creative sphere,” Kasper said. “But at the same time, there’s definitely then a feedback loop, not only in the sense that politicians or law might react to what goes on in popular culture, but popular culture shapes our perception of what makes for good politics … and so in that respect, both books show that interaction and how politics affects what goes on in the arts, but filmmakers and musical artists also then affect what is possible and what is right in politics and law.”