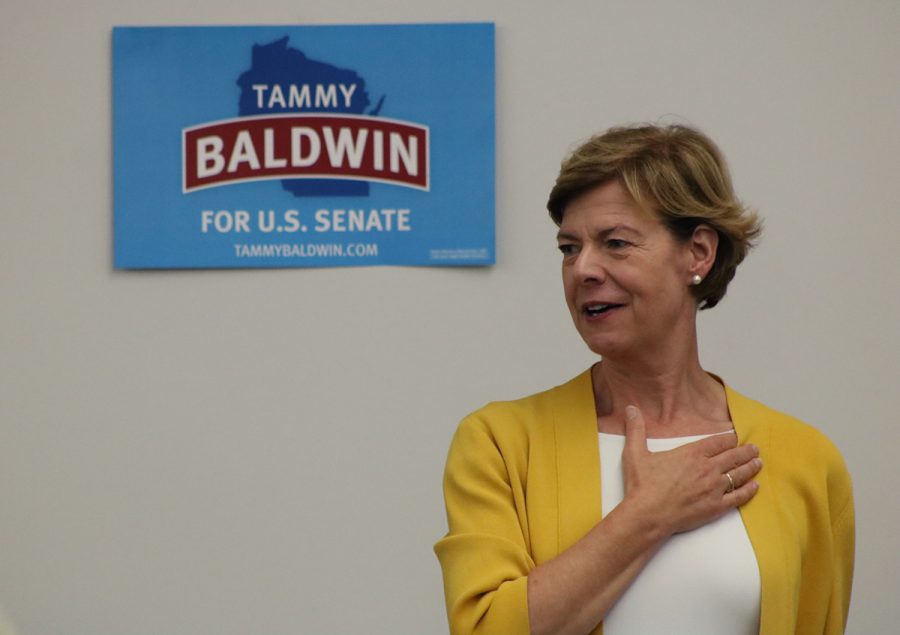 With only a week left before Election Day, U.S. Senator Tammy Baldwin made an appearance at  UW-Eau Claire to discuss the importance of voting. Baldwin is up for reelection to serve on the U.S. Senate for Wisconsin.

Baldwin spoke in Centennial Hall on Tuesday to about 80 students and community members. In her speech, Baldwin noted that, to most voters, there are not so many people on the ballot as there are issues, and votes are going to issues rather than to candidates themselves.

She urged voters to vote for the candidates who will make progress on the issues important to them, and to “vote the obstacles out.”

One of the issues the senator discussed was healthcare. Baldwin talked about her experience as someone who has a pre-existing condition — a condition she’s had since childhood — and how it has influenced her as a politician.

The Democratic senator talked about her support for the Affordable Care Act. She also discussed her membership of the bipartisan effort that created the amendment which guarantees dependents can be covered under their parents’ health insurance until the age of 26.

Baldwin also noted that Leah Vukmir, her Republican opponent, has been running on the promise of repealing the ACA. Baldwin emphasized the need not for repeal, but to instead revise the act with efforts from both sides of the aisle.

Baldwin also said it was very important for students to vote, as they will be the ones affected the most by policies passed in the future. Baldwin urged students to vote early, if possible, as well, joking that there could be a snowstorm on election day.

The senator said the last few days before the election are just about getting people to the polls and thanking the people who have been volunteering, as well as “making sure we pull out all the stops to make sure people can early vote and then vote on election day.”

Tori Wensloff, a first-year elementary education student, attended the event as a member of the College Democrats, the organization responsible for organizing the event.

“I just want to learn and understand what I can do as a student to ensure everyone gets out there and votes,” Wensloff said.

The College Democrats asked for volunteers to canvas for Baldwin and other Democrats on the ballot.