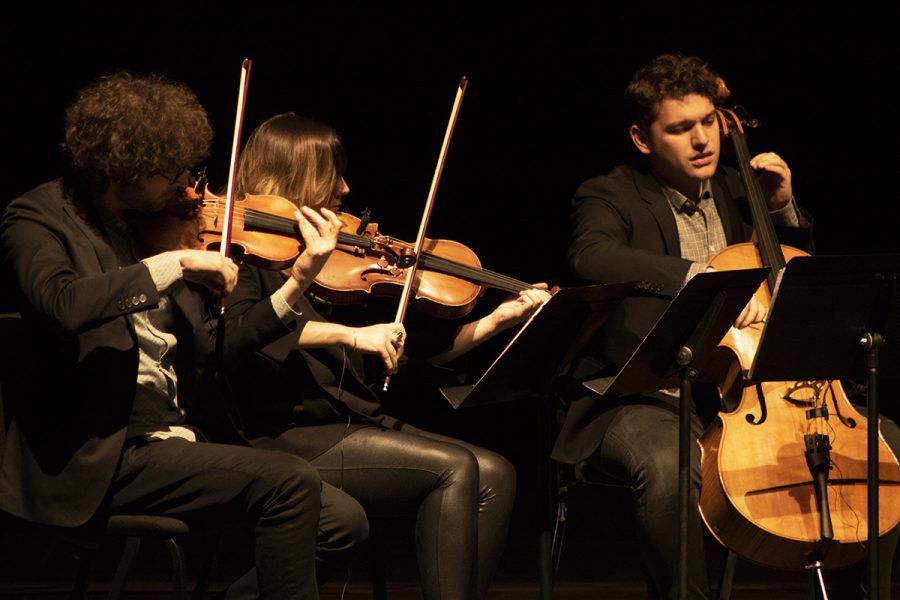 In years past, UW-Eau Claire students have been given the chance to work with guest artists ranging from the Finnish folk group Kardemimmit to the Milwaukee Ballet. For the 2018-2019 academic year, chamber ensemble yMusic will be partaking in a residency program at UW-Eau Claire.

This is not yMusic’s first time intermingling with the music scene of Eau Claire. A few members have played in Bon Iver’s touring band, and the group in its entirety has been drawn to Eau Claire for several occasions, including playing at the Eaux Claires Music & Arts Festival and speaking to Robert Baca’s — UW-Eau Claire’s jazz director — ensembles.

The group’s first visit of the residency consisted of a variety of experiences students could attend. yMusic’s Gabriel Cabezas, the ensemble’s cello player, described the different events that were held Sept. 28 to Oct. 1.

“This past trip, we had a recital on Sunday, and the day before we did a reading of three student composers’ pieces,” Cabezas said. “We did a similar class on Monday, read through three more. We also had a general talk with music students about careers and entrepreneurship.”

As a whole, yMusic said they believe their purpose in Eau Claire is not only to help guide music students as they work on their compositions, but also inspire students to expand their horizons when thinking about the future.

“We in the music world — live in a time where lots of things change quickly,” Cabezas said. “In our individual schoolings we wish we saw people doing a variety of things with their lives. We want to talk to students about how lives can develop in the music world and encourage them to keep their minds open.”

According to Gretchen Peters, Department of Music & Theatre Arts chair and coordinator of the residency, the main focus of yMusic’s residency is on their partnership with UW-Eau Claire music composition students. The five students were chosen by Chia-Yu Hsu, associate professor of music-composition, who is also working on a composition with yMusic. Students were chosen based on a submitted portfolio of prior compositions.

“This fall, the group met with each of the students, played the music, and talked to them about ideas for it,” Peters said. “yMusic will work with the students during each visit and will record the compositions in Pablo at the end of the year.”

In addition to working with the composition students, yMusic will participate in other workshops and presentations tailored not only to music students but also any other interested students.

“Our goal is to have this top-notch group reach out to as many students as possible,” Peters said.

One of these experiences includes forming chamber music ensembles that will be dedicated to the performance of contemporary music.

“yMusic will be coaching these ensembles, and we’re hoping that fellow students will be writing for the chamber groups,” Peters said. “We’re trying to take yMusic’s model and have it be a part of the students in Eau Claire.”

Peters said she encourages students both in and out of the music program to attend future presentations and master classes by yMusic.

“Because of the nature of a classically-trained group playing music in the crossover line, I think yMusic would appeal to a broad group of university students,” Peters said.

“We’re really excited to be in Eau Claire and become a bit more of the community there,” Cabezas said. “Have had a really great time there meeting students and hearing their compositions and are interested to see how they grow from there.”

Students and faculty will have a second chance to see yMusic perform at a free concert in April. Details have yet to be announced.