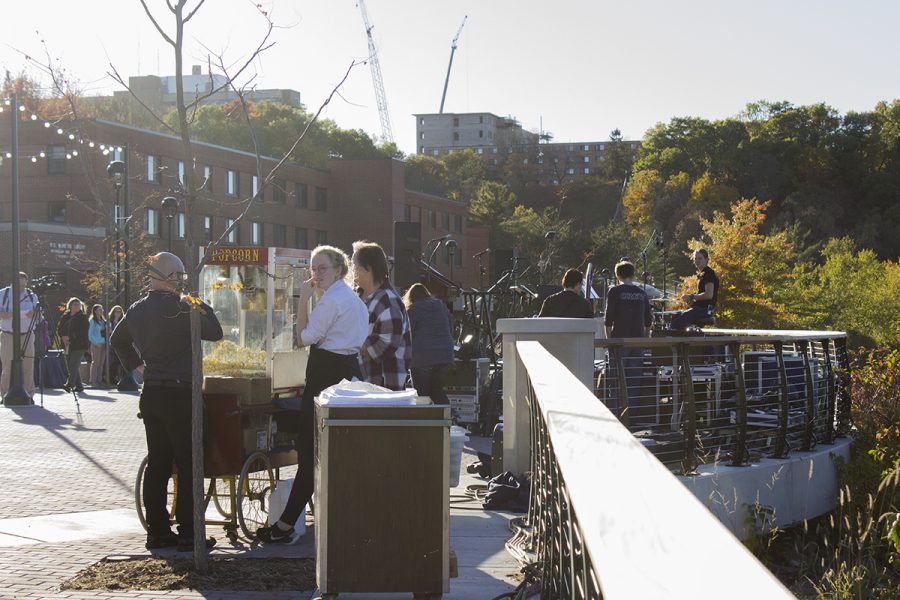 A celebration Thursday marked the official completion of the Garfield Avenue construction and Chippewa River Terrace.

A celebration on lower campus on Thursday marked the long-awaited completion of Garfield Avenue. While the grand opening was originally scheduled for Sept. 25, it was rescheduled when the project wasn’t completed on time, said the UW-Eau Claire website. Though this $12.4 million project started construction in the spring of last year, UW-Eau Claire began planning for the redesign in 2008.

For months, students had been taking alternate routes to class, seeing trees cut down and hearing the frequent sounds of construction. Workers worked on new features — like a terrace complete with firepits, an amphitheater and lookout areas. The project also consisted of a new footbridge with updated pedestrian and bicycle paths.

“Although Garfield Avenue construction was long, it was definitely worth the wait, because it was a project that we really just saw come to life,” Demi Cimiaskaite, a third-year student, said. “And now, seeing the finished product, it’s hard to even imagine what it looked like before. It really has just increased the beauty and the potential of this campus, and has really emphasized its natural features.”

“Eau Claire’s ‘Most Beautiful Campus’ has become even more modern and more beautiful than ever before, with all the awesome fireplaces and lights that everyone can enjoy right along the river,” Sara Beckendorf, a third-year student, said.

“The care and special attention our university has given to this project to beautify our campus makes me know UWEC never stops improving for their students,” Samantha Hytry, a third-year student, said.

During the unveiling, Chancellor James Schmidt revealed that this project consisted of more than 15,000 bricks, 110,000 square feet of concrete, 202 new trees and 78 new lights . While so many additions were made, the majority of this project’s primary goal was to replace outdated utilities beneath the surface of Garfield Avenue, which dated back to 1950 and earlier.

Schmidt also unveiled the new Chippewa River terrace, which now replaces the street that “once was a barrier” to the river.

“It’s our responsibility to make sure that the built environment reflects and contributes to Eau Claire’s natural, unique setting,” Schmidt said. “Clearly, the new Garfield Avenue corridor accomplishes that goal, and enhances our reputation as Wisconsin’s ‘Most Beautiful Campus.’”

Schumacher can be reached at [email protected].