In the first discussion, speakers offered their personal stories and their knowledge about the Holocaust and Arabian Genocide 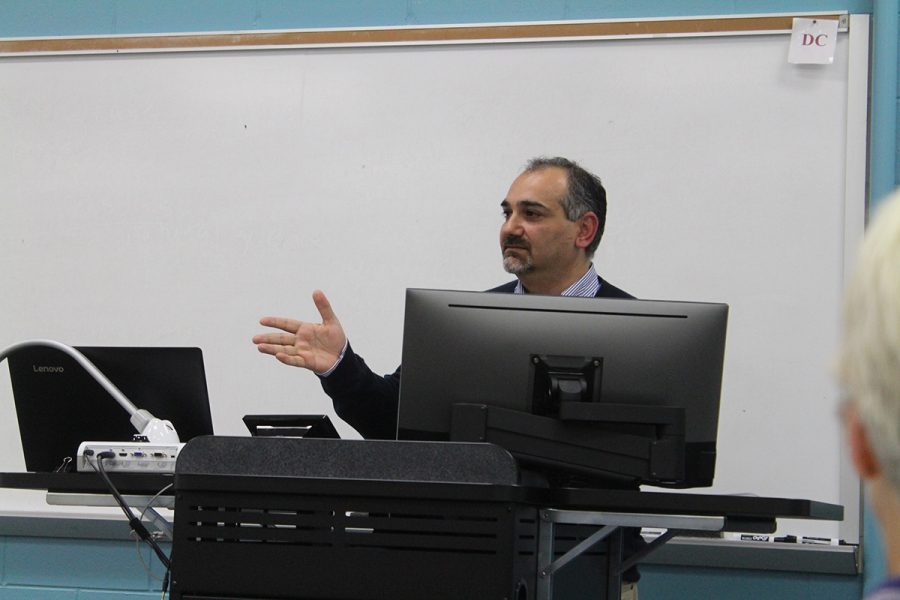 Artyom H. Tonoyan share his knowledge and stories about the Armenian genocide.

Students, faculty and members of the Eau Claire community gathered on the night of Sept. 25 in Hibbard 310 to attend the first discussion in the “Holocaust and Genocide: Voices of Their Families’ Suffering, Loss and Survival” series.

Yaakov Levi, the L.E. Phillips religious studies professor at UW-Eau Claire, has incorporated this series into his course titled “The Holocaust, 1933-1945.” Discussions will continue to take place on specific Tuesdays from 6:30-9:15 p.m., with various speakers who have knowledge of, or are personally connected to, the Holocaust or other genocides.

Levi said he wants students — and all other attendees of the discussions — to relate to the content, instead of purely interpreting the information they learn.

“I want to raise their emotions, rather than just their knowledge,” Levi said. “I want them to understand how it felt to be in the Holocaust and that … it can happen to anybody — it can repeat itself.”

The presentation on Sept. 25 featured three speakers and two different topics. For the first half of the discussion, the Armenian Genocide was examined by Reverend Father Tadeos Barseghyan and Artyom H. Tonoyan, a religions sociologist and post-doctoral research associate in the Institute for Global Studies’ Modern Greek Studies program at the University of Minnesota.

Barseghyan introduced the Armenian Genocide by explaining the events that lead to, and occurred during, the Ottoman government’s killing of 1.5 million Armenians. Having been born in Armenia, he also discussed his family’s personal accounts of loss and narrow survival. Barseghyan then referenced a picture of Armenian children holding a sign that read “Remember us.”

“‘Remember us,’” Barseghyan said, emphasizing the words in the picture. “If we forget, it’s dangerous.”

Barseghyan said this discussion marks his third time speaking at UW-Eau Claire, and he finds that he continuously returns to the university to provide information to those who want to embrace it.

“I’m always ready to educate those who are willing to learn,” Barseghyan said.

For this specific discussion, Barseghyan said he received an invitation from Levi, who welcomed him to participate in this Holocaust and genocide series. Barseghyan said these discussions are important to have — not only to teach individuals about these events, but to inspire a generation of people who ensure that a genocide never occurs again.

“(These discussions) are important because they bring awareness to these issues,” Barseghyan said. “We need people to act who will prevent future genocides to occur.”

When Barseghyan was finished, Tonoyan concluded the conversation about the Armenian Genocide by detailing the process by which Armenians were stripped of their culture and homeland. Like Barseghyan, Tonoyan was born in Armenia. He relayed several of the gruesome encounters that his family had throughout the duration of the genocide.

Steve Hunegs, who is the executive director of the Jewish Community Relations Council of Minnesota and the Dakotas, was the third and final speaker of this first presentation in the “Holocaust and Genocide” series. He discussed the origins of anti-Semitism and the extent to which it is present today.

Hannah Howell, a fifth-year biology student, said she is attending the discussions in this series as a part of her Holocaust class, which she is taking with Levi. Howell said she appreciates hearing personal stories from speakers, outside of the material that they usually learn in class. However, as the speakers also stressed, Howell said discussions like these are important because they remind people that history can indeed repeat itself.

“It could easily occur again; not just for Jews or Armenians, but for anybody,” Howell said.