Organizing in the pursuit of systematic change 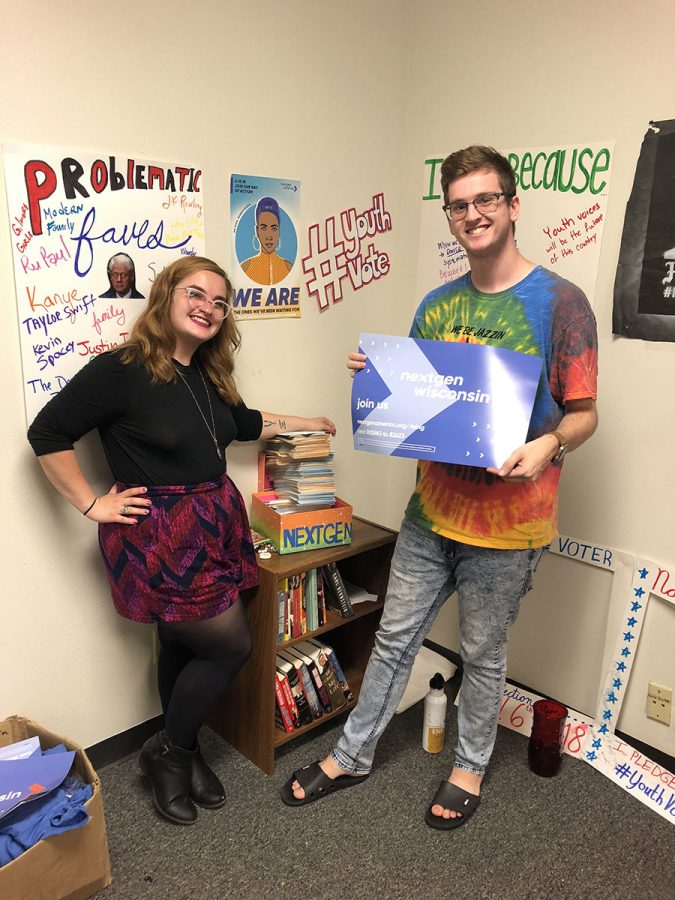 A national movement that promotes voting among younger voters is making waves here in Eau Claire.

According to its website, NextGen America is an organization that has been striving to generate increased numbers of 18- to 35-year-old voters since its beginnings as NextGen Climate in 2013. Just this past June, the organization planted its roots in Eau Claire.

“We are the largest youth organizing group in the country,” said Kessa Albright, a fifth-year women’s, gender and sexuality studies student at UW-Eau Claire and NextGen Wisconsin fellow.

Some of the main issues NextGen highlights, according to its website, are gender equality, climate change, immigration, health care and economic prosperity.

The organization is based in 11 different states, Albright said. NextGen’s focus when determining location is the state’s effect during elections, Albright said. Wisconsin is one of the key swing states, and Albright said Eau Claire – because of its passionate inhabitants – is a perfect platform for NextGen to mobilize on.

NextGen’s office – located in Building D2, Suite 407, of Banbury Place – was established in August. While the space functions as a meeting, socializing and planning room, Albright said she and the other two fellows aren’t there very often.

“We’re in the field, we’re on campus, we’re walking around clip-boarding at different events in the community, knocking on doors,” Albright said. “We are a student-powered organization. We’re the ones having conversations, organizing in our own communities and recruiting volunteers who have the same goals as us.”

Albright said, as a fellow, her main priority – because of her belief that voting is a social activity – is becoming a familiar and friendly face on campus. She said she aims to make the conversation about voting as casual and accessible as possible.

David Edwardson, a third-year software engineering student at UW-Eau Claire and NextGen Wisconsinf fellow, said NextGen places a lot of attention on first-time voters, because voting tends to be a habitual act.

He said the organization strives to have one-on-one conversations with students and get them thinking about their stance on topics they’re passionate about.

It’s also important, Edwarson said, that younger people fully understand and have access to resources regarding the voting process – like voter registration – and ensuring that students are aware they can register to vote for free on campus.

Edwardson said NextGen strives to make voting and learning about the voting process fun for everyone involved.

Edwardson said he became interested in political issues because of the economic hardship he faced throughout his childhood. A lack representation  of younger generations in politics is what officially pushed Edwardson to join the NextGen movement, he said. Young people, he said, oftentimes get left out of political conversation and are frequently underestimated.

With the upcoming Midterm elections in sight, and multiple campaigns in full-swing, Albright said the organization will be in full-throttle until those are done. NextGen plans to continue organizing at local events and holding some of their own. They’ll also keep clip-boarding door-to-door and texting with the help of volunteers, Albright said.

Midterm elections, according to the Wisconsin Elections Commission, are on Nov. 6. The ballot will include candidates for Governor and Lieutenant Governor, Attorney General, Secretary of State, State Treasurer, U.S. Senator, Representative in Congress, State Senator, Representatives to the Assembly and County offices of Sheriff, Clerk of Circuit Court and Coroner.

In terms of the future beyond Midterms, Albright said NextGen is in the process of becoming a student organization at UW-Eau Claire. This would allow them to reserve rooms and hold weekly meetings on campus. No matter what, Albright said they’re determined to keep a strong presence on campus and continue having open conversations about voting.

All in all, Albright said she believes young people are more excited to vote than ever before. When young people rally together and vote, it could seriously impact things like tuition cost, climate change and reproductive justice.

“We’re going to make systematic change when we get young people out to vote,” Albright said. “I’m pumped about it.”

Reisdorf can be reached at [email protected]