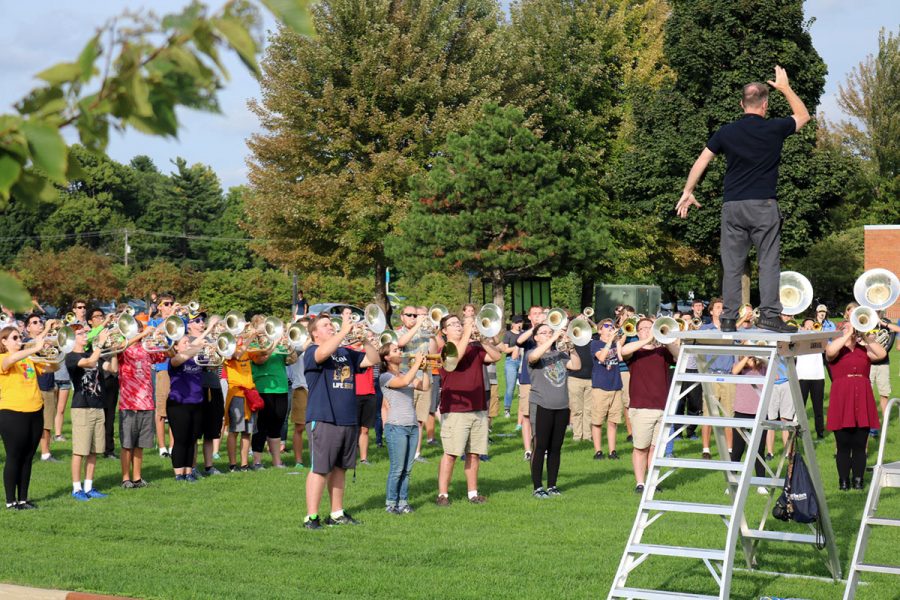 Due to demand, director Dr. Dickerson allowed more students to join BMB, making it the largest marching band in the midwest.

Since its 2000-2003 reinvigoration — including new uniforms, a revamp of popular music scores and a fresh interest in university marching bands — the Blugold Marching Band has boasted a high level of interest from students, and this passion for band has peaked this season with the addition of 50 more band members from the usual 350-member band.

After seeing the number of students who were waitlisted for marching band, Randal Dickerson, director of the band, made the decision to add 50 more students, making the Blugold Marching Band the largest marching band in the midwest. This is a 500 percent increase from its 60 members in 2000, according to the BMB website.

When Brady Scafe — a fifth-year anthropology student at UW-Eau Claire, clarinetist and a manager of the BMB — first saw the BMB at one of her high school band competitions, she said it was a little overwhelming.

“A lot of the section leaders — a lot of the drum majors — are doing the teaching,” Scafe said.  “Dr. D would point them in the right direction, give them guidance, but then they would come back and teach those sections the music, the choreography and everything else. With so many people in the band it seems like it’s just gotten easier because the section leaders and things are just more involved than they were when I started.”

Deidra Gibson, a fourth-year French student and chief manager of the band, agreed.

“It’s a little easier now than when I first started,” Gibson said.

She attributed this less stressful management to a “pyramid-shaped” leadership system.

Nathan Czech, Megan Hutera and Matt Hicks are the three drum majors of the BMB this season, and they have much to offer to that leadership system. Hutera, a third-year music education student, said the drum majors feel the weight of having more people in band.

“We are spread front to back, sideline to sideline,” Hutera said. “When we are marching music on the field, that puts a lot of responsibility on the drum majors.”

However, Hutera said this experience, though it may be stressful, is worth it.

Matt Hicks, a fellow drum major and fourth-year chemistry student, said having 400 people in band is something no other student organization can offer.

“The drive and work ethic that everyone has in the organization — it’s like nothing else,” Hicks said. “It’s a group of 400 people that want to be there. Everyone is putting their best foot forward and is trying to be the best marcher — the best instrumentalist — that they can be.”

“It’s been a goal of mine since my senior year of high school to be a drum major for the Blugold Marching Band,” Hicks said. “I’m excited to do as much as I can to improve the organization for people who are going to come after me. … Ultimately I’m not ready to leave. But I’m going to know that things that I have done will leave an impact on the band for the future. And that’s what I’m looking forward to the most.”

The first opportunity to see the BMB perform will be at 6 p.m. on Saturday, Sept. 8 at the first football game of the season.