UAC Springfest: ‘Giving back to students’

This week, the UAC Festivals Committee offered a variety of free food and entertainment to students to celebrate the end of the semester 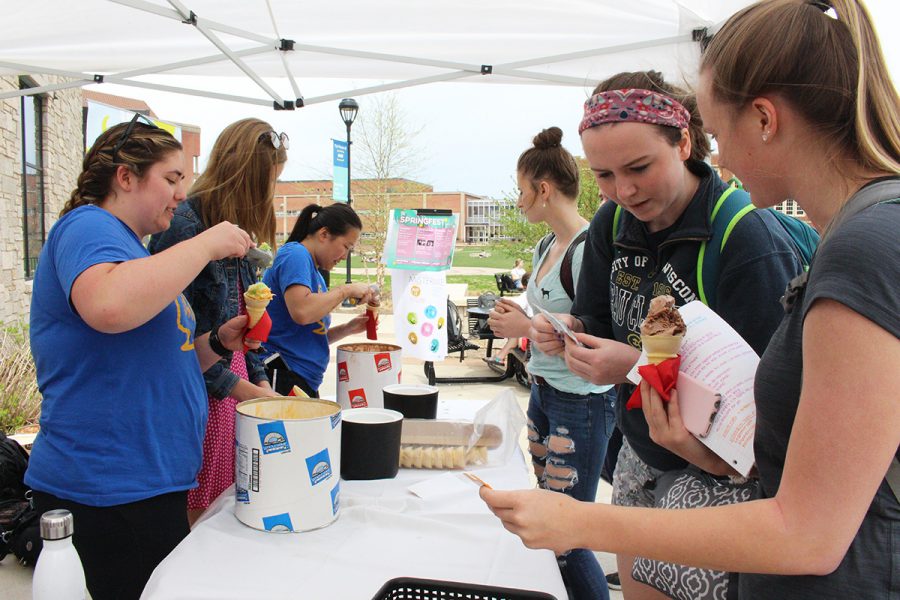 The annual festival allowed students to de-stress amidst the chaos of finals.

Ice cream, puppies and finals. Although these three things don’t typically go together, the University Activities Commission (UAC) made this association possible with the annual Springfest celebration that took place this week at UW-Eau Claire.

The event offered free food and entertainment on the Campus Mall each day, with offerings including an ice cream stand, lawn games and music performances by local bands Laska and Olive Sings.

Shannon Czaplinski, a junior accounting student, serves as the UAC Festivals co-chair alongside Julie Norfolk. Czaplinski, who has been involved with UAC for three years, said that the annual festival is intended as a celebration of the end of the semester for students.

“(Springfest) is all about giving back to the students,” Czaplinski said. “We want to give everyone a chance to relax and decompress before finals.”

After deciding to change the setup of the event last year, Czaplinski said that they were happy with how everything turned out and decided to keep the structure and content of the festival similar to the 2017 Springfest celebration.

Each day had its own specific schedule of events. Free ice cream and popcorn were given out on Tuesday; music was performed on the Campus Mall on Wednesday; Thursday features therapy dogs, Zumba, cotton candy and more; and on Friday, students can attend a grill out.

Claudia De Valk, a junior mathematics student, is involved with UAC as the co-chair for the film committee but helped out with Springfest as a volunteer.

In addition to giving students a chance to de-stress, De Valk said that Tuesday’s activities were also intended to promote what is known as “Gratituesday,” a movement that encourages people to appreciate the good aspects of their lives.

“We want to promote happiness and gratitude on campus,” De Valk said. “It’s always good to have that positivity around us.”

Both Czaplinski and De Valk said they are looking forward to the music performances most out of all the Springfest events. Czaplinski said she was especially anticipating watching Olive Sings perform on Wednesday at the Campus Mall alongside Laska. Olive Sings was selected for Springfest after they won the Battle of the Bands competition and fundraising event on campus earlier this year.

De Valk said she’s most excited to see the band Misterwives perform in their concert at Zorn Arena this upcoming Saturday. Although the concert is not a designated Springfest activity, Czaplinski said the timing worked out perfectly so that it can serve as a finale to the week of festivities. Tickets for the Misterwives concert can be bought in advance or at the door.

Springfest occurs during the day on campus, making it accessible to all students. Cambrie Naquin, a sophomore nursing student, said she found out about the event when she saw ice cream being served outside W.R. Davies Center on Tuesday and decided to investigate with a friend.

“We were just hanging out when we saw people gathering and getting free food,” Naquin said. “The (Springfest) event I’m looking forward to most this week is definitely the therapy dogs.”

The UAC Festivals Committee also organizes Homecoming and Winter Carnival. Springfest is the organization’s final event of the academic year.