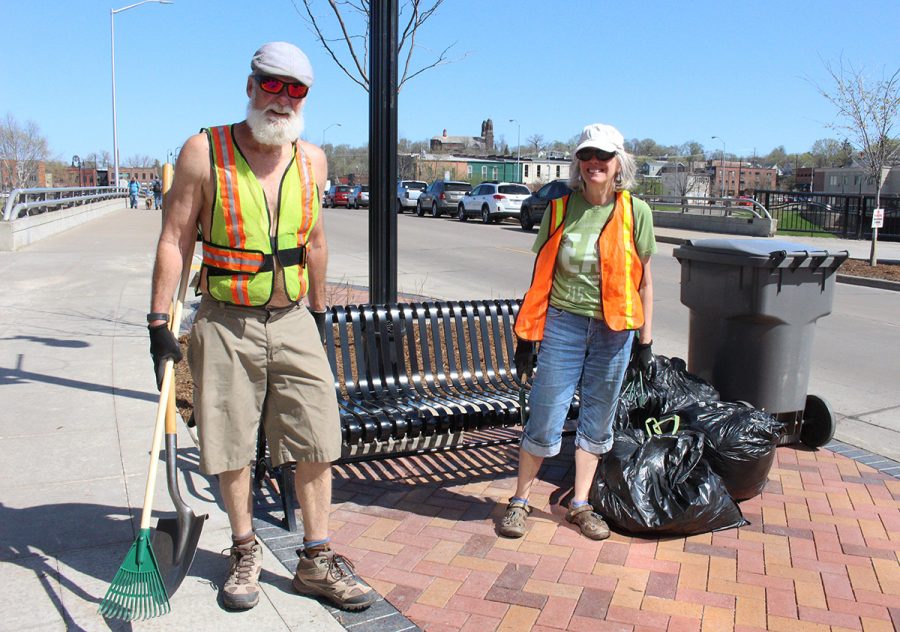 An estimated 400 to 500 community members volunteered at Saturday’s event.

Volunteers gathered along locations like Barstow St., Water St., local neighborhood parks and the Eau Claire trail system in order to pick up trash and beautify the community. Some volunteers also assisted in preparing the local flower beds for planting.

After the two hours of cleaning the community, volunteers gathered at the Hobbs Ice Arena for refreshments, recognitions and raffle prizes.

Joseph Morken, a local high school senior, and Sabrina Steinhauer, a first-year health and information management and technologies student at Chippewa Valley Technical College, have each attended the Clean-Up with their church for two to three years. Both said they have plans to help out again in the future.

Steinhauer said the Clean-Up functions as a way for people to improve the looks of the town, while also promoting outdoor activity.

“It’s a great way to connect with people in your community and build friendships,” Steinhauer said. “Do something that’s important — something that can help affect people outside of just you and your circle of people.”

Morken said he agreed with Steinhauer’s points, emphasizing the importance of community pride and cooperation.

“There’s some pretty good fellowship that goes on when you (volunteer at the Clean-Up),” Morken said. “You can hang out with different friends on a nice afternoon, while still working. When people see you cleaning-up Eau Claire, I feel like that motivates them to do the same.”

In partnership with the ECPRF are Downtown Eau Claire, Inc. and American Family Insurance. Anna Pulda, a volunteer form American Family, said this was the first time her company had participated in the Clean-Up. American Family volunteered by serving food and drinks to the participants. Pulda also said it was her first time attending, as well.

“This is something we’d love to do every year,” Pulda said. “It’s just nice to see everyone get involved with the Clean-Up; especially with the downtown community. I think you just appreciate it more and respect it more.”

Pulda said events like this are important to her because she wants her 10-month-old son to grow up participating in his community. She said she hopes helping out and volunteering will become “a part of his nature.”

“It’s just good for everyone to get out there — volunteer in something you know you want to do.” Pulda said. “This is something nice because you get out, you walk around downtown and you clean it up.”

Carrie Ottum, an event coordinator with the ECPRF department, said this year’s turnout was slightly smaller than previous years, due to the event’s rescheduling from an earlier date. Nonetheless, Ottum said the Clean-Up succeeded in bringing the community together and preparing the town for summer.

“It gives people a chance to take responsibility in their community — in beautifying it,” Ottum said. “It’s just a good way to, one, see all Eau Claire has to offer, and, two, give back to our community.”

Ottum said ECPRF is looking to bring in more partnerships for next year’s Clean-Up. The next big project for ECPRF is the opening of the Fairfax Outdoor Pool, which Ottum said is set for May 26.