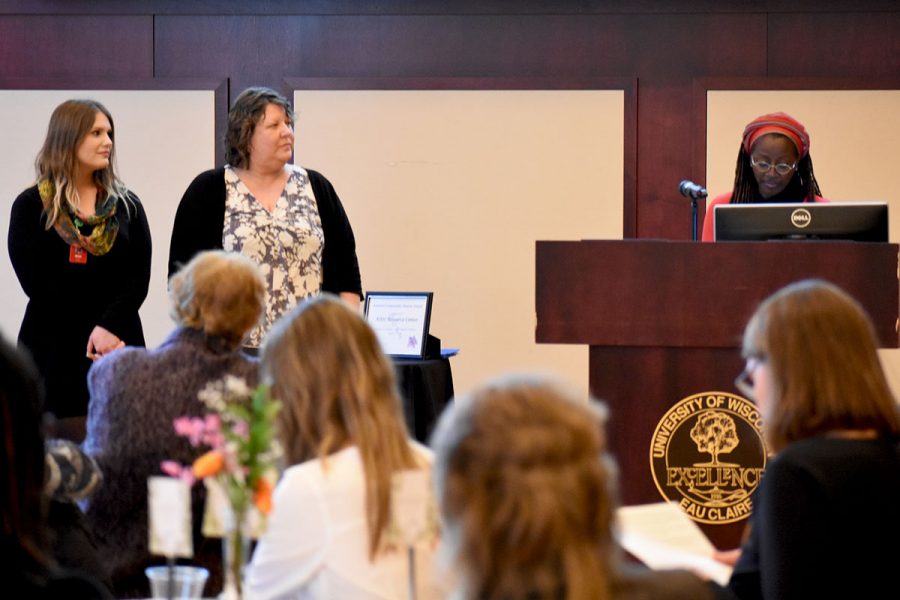 For over a decade, the Women’s, Gender & Sexuality Studies (WGSS) program has awarded students, faculty and affiliates for their work within and around the program. This year, after a recent rebranding of the program, a new award was given to outstanding seniors along with 10 other awards on Wednesday evening in the Ojibwe Ballroom of Davies Student Center.

“I think it (the awards night) is really wonderful,” said Barbara Kernan, a professor emerita of the program. “Everybody needs to have their hard work recognized.”

Kernan said although the program has historically only handed out awards for students who have completed projects, papers, service or creative arts, the program presented a new award this year recognizing graduating seniors.

The two recipients of the new Outstanding Seniors Awards were Kessa Marie Albright and MacKayla John, both graduating WGSS majors who remained committed to the program throughout college and distinguished themselves, Kernan said.

“It’s an honor to be one of the first recognized for this award,” Albright said. “Getting this award just makes it feel like all of the work that I’m doing is paying off.”

Albright, a fifth-year student and co-president of the UW-Eau Claire College Feminists club, said she began her college career with a journalism major but later declared WGSS with a communication studies minor instead.

“I wanted to make change in a much different way,” Albright said. “I really want to go into organizing for either issue-based campaigns and non-profits or for political leaders.”

Thirteen other students and faculty received awards, recognizing those who have proven commitment and dedication, published written works or created visual art.

Prevention Specialist Sornson said her journey began as a capstone student in the WGSS program and was admitted as an intern at ARCW.

“I loved the feminist work that we were doing, the intersectionality work that we would do with community members,” Sornson said, “It feels really nice to be recognized and to have come full circle.”

Program Director Rose-Marie Avin said up until last year, the program has been called Women’s Studies. Recently it underwent a rebranding, changing the name to Women’s, Gender & Sexuality Studies and adding an official logo designed by Amanda Thao, a fifth-year student.

Avin, who has been the program director for two years, said she thinks the new identity reflects the purpose of the program better.

“It feels more inclusive,” Avin said. “We have an LGBTQ certificate and students feel a lot more welcome to the program. People think it’s all about women, but it’s about inclusivity of gender, race, class and sexuality.”

Kernan said practicing inclusivity and listening to their students is central to the program’s goals.

“Feminist pedagogy is very inclusive and it tries to break down power structures, so we like to have student input on everything,” Kernan said. “We take our student evaluations very seriously. We oftentimes recraft courses based on what students tell us.”

Currently the program has 26 students who declare WGSS as their major and 25 who declare it as their minor, Kernan said. 13 are pursuing an LGBTQ certificate and 35 are working toward a Women’s Studies certificate.