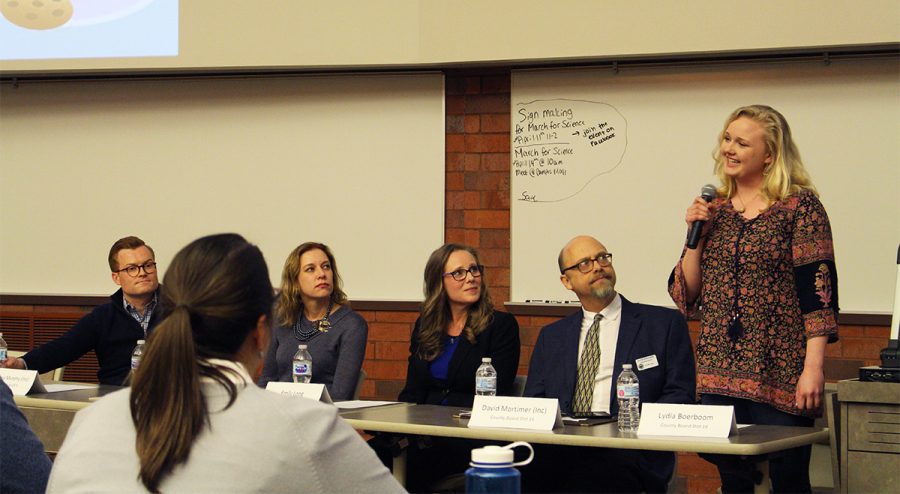 Lydia Boerboom, a UW-Eau Claire student running for County Board, answered questions at the forum on Tuesday.

Student Senate’s Intergovernmental Affairs commission hosted the forum in Hibbard Humanities Hall. After a half hour of socializing, the candidates introduced themselves, answered a set of standard questions and responded to audience concerns.

Incumbent Mitchell and Gragert are contesting for the District 3 seat, which encompasses UW-Eau Claire’s residence halls and the Third Ward neighborhood.

Mitchell has been a representative for seven years. Prior to her time on the City Council, Mitchell said she worked at UW-Eau Claire in the chancellor’s office. She said she helped create the Center for Excellence and differential tuition. Currently, she lives in the Third Ward.

During the forum, Mitchell stressed the importance of the relationship between the city and the university, including student participation in neighborhood association meetings. She said she wants to improve housing for low-income renters.

Mitchell’s opponent, Gragert, is running for Council for the first time. Gragert is a graduate of UW-Eau Claire. He said he rents a house in the Third Ward. Gragert has served on various local boards, including the Chippewa Valley Transit Alliance.

“A renter’s perspective is very important to have on our City Council,” Gragert said.

Running for an at-large council member position are Weld and Meives.

Weld has served on City Council for one year. He said he sits on the Transit Commission and the Waterways and Parks Commission, among others. Outside of City Council, Weld has a real estate background. He said he has enjoyed his time on the City Council and calls his work for the community “energizing.”

The incumbent spoke about improving housing conditions, which he said he believes will be achieved by including the whole community in the discussion.

“We’re rewriting it; that will make it a win-win for everyone,” Weld said.

Meives, a graduate of Chippewa Valley Technical College, said he discovered he enjoyed working with people to solve problems. Meives comes from a criminal justice background.

The twenty-one-year-old spoke about the importance of communication, transparency and ethical leadership. In the face of neglected rental properties, Meives said he believes landlords should face harsher punishment.

Meives also said he was disappointed with the drafting of the Public Good Order ordinance and said communication should be a priority moving forward.

“We should try and keep other organizations and groups involved in this process,” Meives said.

Werthman, an incumbent, will run unopposed in District 5.

Mortimer, the incumbent, has served on the board for two years. Outside the political arena, he works as the Director of Innovation Institute for the Hospital Sisters of St. Francis.

During the forum, Mortimer said he admires the “coalition of co-employers” in Eau Claire, like the university and local hospitals, and said he wants to strengthen their relationships. He referenced his time working with the homeless in Chicago as inspiration to pursue civil service.

Boerboom, a junior social work student at UW-Eau Claire, is new to local politics. On campus, however, Boerboom said she has been active. She has helped lead various organizations, one being Progressive Students and Alumni.

Eau Claire should continue to develop spaces for different members of the community to gather, Boerboom said. She also focused on rehabilitation, low-income housing and environmental public health on Tuesday evening. Boerboom said her passion for Eau Claire’s strong community lead her to run for office.

Contending for the Branch 5 Judge position are Murphy and Harless.

Murphy, the incumbent, grew up in Eau Claire and attended UW-Eau Claire. Previously, Murphy worked as a legislative counsel in the U.S. House of Representatives in Washington D.C. for five years. After moving back to Eau Claire, Murphy joined the law firm Ruder Ware, L.L.S.C.

Harless came to Eau Claire in 2005 after her husband was offered a position as a hall director at UW-Eau Claire. With her family, Harless said she lived on the campus for five years. Her legal background includes working as an attorney at Hertel Law, S.C., and Herrick and Hart, S.C. She worked as a law clerk in the Wisconsin Court of Appeals and a staff attorney at Wisconsin Judicare.

All three judges expressed concerns about Eau Claire’s methamphetamine problems and debated the duty of the judicial branch to rehabilitate or incarcerate.

Anna Ziebell, a first-year political science student who is a part of Student Senate, said coming to the forum was time well-spent.

“I definitely have more of an open mind about who I’m going to vote for,” Ziebell said.

Elections for City Council, County Board and Judge will be held on April 3. Voters can find what district they vote for by visiting the City of Eau Claire’s website.