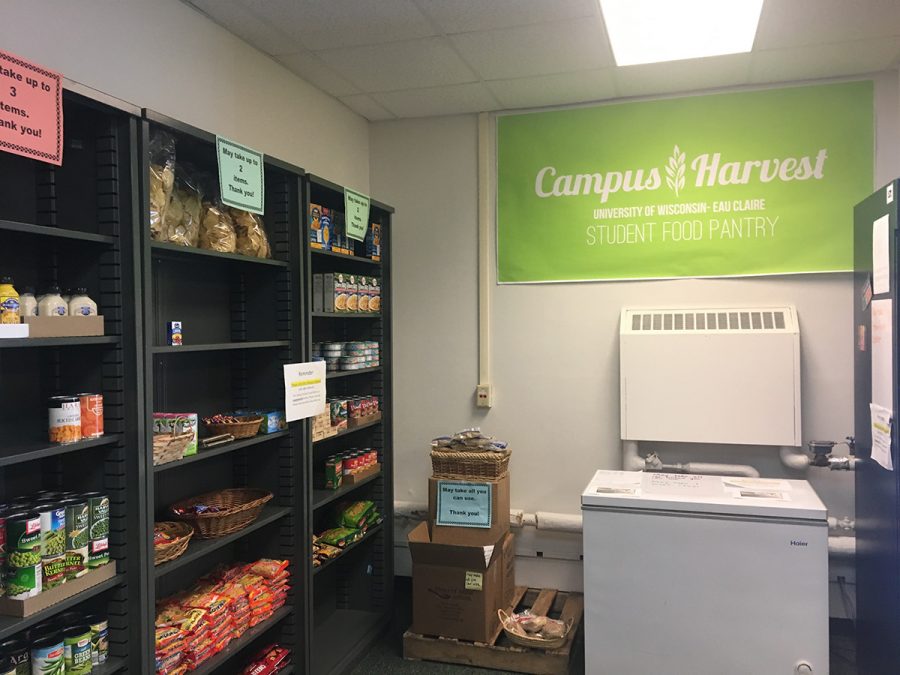 The Campus Harvest Food Pantry is located in Room 4 of Schofield Hall.

The winding passageways of the historic Schofield Hall hold a multitude of offices that aim to fulfill various student needs.

The Center for International Education, the Admissions office, the Office of Financial Aid and Career Services are just a few of the many offices located within the walls of Schofield. One area that may not be as familiar to students is the Campus Harvest Food Pantry.

The food pantry, which opened in fall 2014 and is located in Room 4 of Schofield, offers perishable and non-perishable food items as well as personal hygiene products free of cost to anyone with an active Blugold ID.

The initial plan was for the pantry to be run by students, Carr said. However, after hearing about the idea, Carr said she volunteered to run the pantry herself because this would allow for more consistent leadership.

“I’m passionate about feeding people, it really upsets me to know that there are people who don’t have enough food,” Carr said.

Carr said she immediately hired a student intern, and has had one for every year the pantry has been open. Other positions like pantry staff, food drive assistants and pantry advertising are filled entirely by student volunteers, Carr said.

Alice Dimassis, a second year kinesiology student, is one of the students who works as a pantry staff. While Dimassis said she’s new to volunteering, she had been using the pantry before deciding to work there. After realizing how beneficial its presence is to students, she said she decided to become a part of it.

“It’s nice to feel that support coming from the school, and that the school is looking out for students by getting food and supplies for them,” Dimassis said.

Community involvement, both on- and off-campus, has been vital to the pantry’s success, Carr said. She said the pantry relies on food donations and fund donations.

One essential community organization that has formed a partnership with the pantry is Feed My People Food Bank, Carr said. The food bank sponsors the pantry, making food cheaper and more accessible.

“For every dollar we take in, we can get ten dollars worth of food from Feed My People,” Carr said. “Every dollar goes a lot farther.”

Because of the food donations received, Campus Harvest Food Pantry began this fall with a fully stocked pantry, Carr said. This pushed Carr to begin expanding her focus onto offering personal hygiene products at the pantry, she said.

Carr said numbers, in amounts of food and people who use the pantry, have steadily increased since the pantry’s opening.

To assist in the pantry’s future growth and success, Carr said she hopes to obtain more freezer space, which would make protein-rich foods readily available in higher quantities, and has been thinking about the possibility of moving from Schofield to Davies Student Center.

Additionally, Carr said she has another project called Campus Closet that is set to take-off in the fall. The Campus Closet would be located right next to the food pantry, and would offer new or gently used professional clothes.