The businesses of co-owners Rachel Duffenbach, Michelle Anthony and Brittany Tainter were announced as this fall’s Red Letter grant recipients 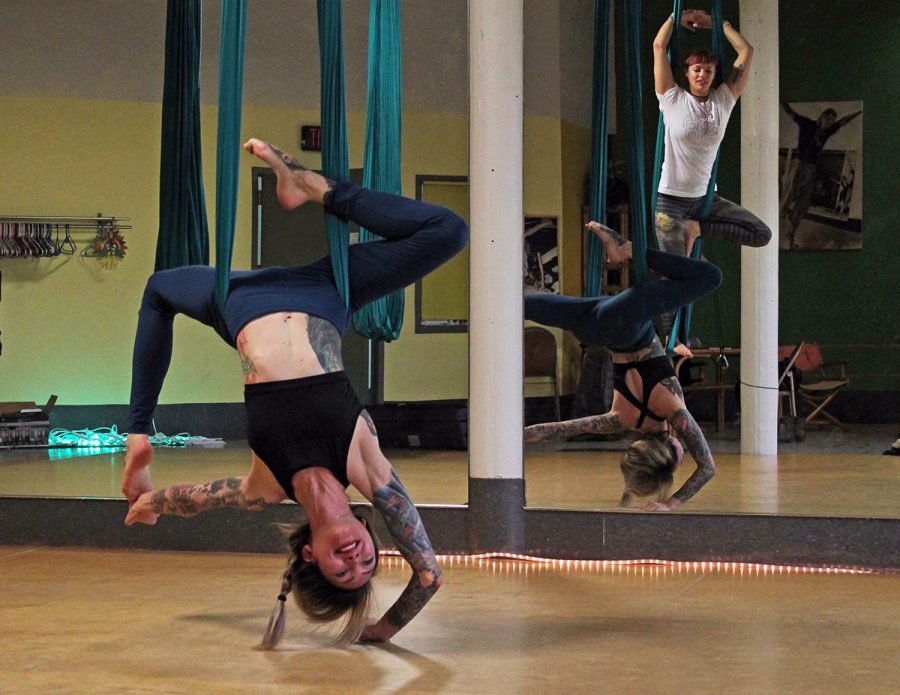 Moonrise Aerials, owned by Rachel Duffenbach and Michelle Anthony, was one of this fall’s grant recipients

On Nov. 6, the recipients of the Fall 2017 Red Letter Grant were announced. The Red Letter, which was started by Becca Cooke of Red’s Mercantile, awarded two female-run businesses $2,000 each.

Of the 13 applicants, the recipients of this fall’s grant were Rachel Duffenbach and Michelle Anthony, co-owners of Moonrise Aerials, and Brittany Tainter, owner of Giizhig Design Company (GDC).

Moonrise Aerials offers classes and workshops in aerial yoga and aerial acrobatics. The primary goal, Duffenbach said, is to help customers build strength and flexibility while also immersing themselves in a unique and supportive environment.

“We offer a wide variety of classes that all focus on building community, making people feel empowered in their fitness journey,” Duffenbach said.

When the business officially opened on Oct. 1, Duffenbach and Anthony taught classes and running workshops without pay. Instead, they put the money directly into the business.

“I’ve had multiple clients tell me that our classes have changed their lives, made them feel more graceful, made them feel more confident, given them a purpose,” Duffenbach said. “It’s something I wasn’t really expecting, but it’s really rewarding to get this kind of feedback from clients and feel like you’re making a difference in their lives.”

The Red Letter Grant is going to give the business pair financial freedom to do the things they want and need to do, Duffenbach said.

The plan for now is to add new staff and new equipment, she said. A large focus will also be given to marketing, because the current location doesn’t have a storefront.

The end goal is to expand to a new location that is entirely their own, Duffenbach said.

“Right now we’re in the dance studio in Banbury Place, so we share it with a couple other groups, which is really nice, but we have to share a schedule with other people,” Duffenbach said. “We want to be able to form our own schedule and have classes that go all day, every day.”

Unlike Moonrise Aerials, Giizhig Design Company (GDC) is in its initial steps of becoming an official business, Brittany Tainter, owner and creator of GDC, said. The plan was to begin the logistics after the Red Letter recipients were announced, Tainter said.

Tainter said she heard about the grant via social media. While she always knew she wanted to start a business of her own one day, the grant motivated her to think about where she could go.

“I think the grant is a really great opportunity for women,” Tainter said. “It pools resources, and it’s given me an opportunity I never would have had.”

GDC allows for Tainter to use her artistic talents in order to help businesses and organizations with branding and any other design assets they may need. Additionally, Tainter said she plans to use her business as a way to represent and preserve her Native American culture and promote social change.

“Giizhig Design Company is pretty much a design agency with a cause,” Tainter said.

Since finding out she was a recipient of the Red Letter Grant, Tainter said her life has been a whirlwind. She’s had to do a lot of research, and taking the next steps for her business has been difficult and time-consuming.

However, Tainter said she feels empowered by the grant and her accomplishments thus far.

Tainter said she plans to use the grant for start-up expenses, such as purchasing a new computer, software and marketing efforts. She said these additions are going to help immensely in getting the word out about GDC.