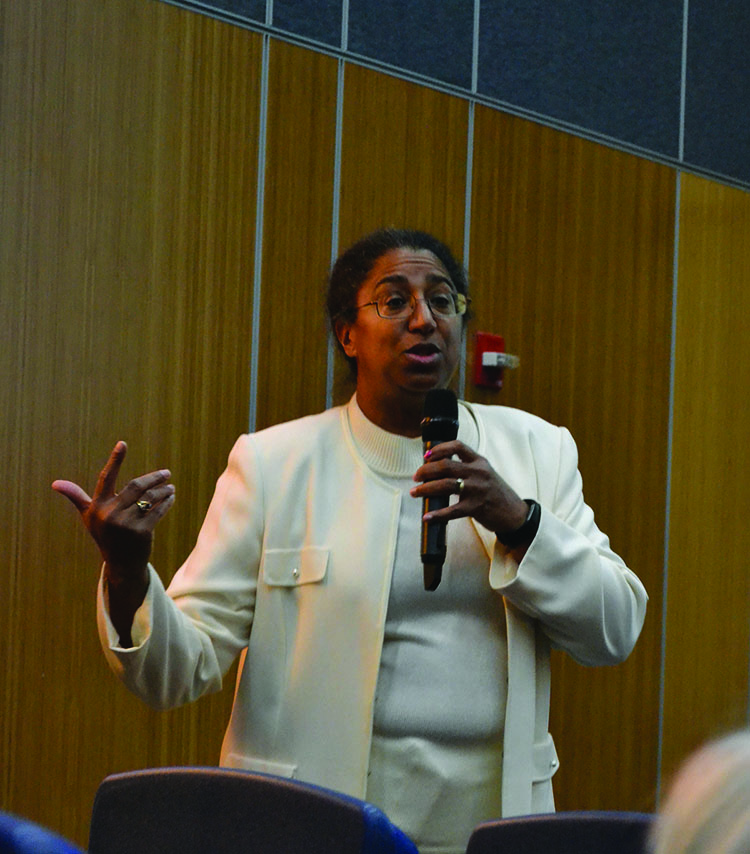 Professor Selika Ducksworth-Lawton’s presentation was part of the ‘WWI and America’ series to commemorate 100 years since the U.S. entered the war.

On Tuesday, Selika Ducksworth-Lawton, a military historian and history professor at UW-Eau Claire, presented on African-American service in World War I.

Ducksworth-Lawton told stories of the difficulties African-Americans faced before the U.S. entered World War I, the environments the soldiers were put under during their time of service and how they were treated when they returned home.

The audience included college students, professors and a Korean War veteran who shared his own war experience with African-Americans.

Only 350,000 African-Americans served in World War I and a majority of those men were in support roles. Sixty thousand of those saw combat, including the famed “Harlem Hellfighters.”

African-Americans before World  War I were not allowed to enlist in the military, according to Ducksworth-Lawton, because they were viewed as inferior to everyone else. All that changed  in the early 1900s when a law termed “new negro” allowed African-Americans who were born after the Civil War to enlist.

Ducksworth-Lawton said African-Americans sought service to counter the stereotypes against them. They wanted equality, a chance to show to everyone else they belonged but also education, as many of them were not literate.

“You have equality — they were fighting Jim Crow,” Ducksworth-Lawton said. “It was to show power of manhood, because a soldier is the ultimate representation of manhood. But you also have the best pay and the best way to get educated.”

Luke Halvorsen, a first-year student at Eau Claire, attended because of his history class but said he learned a lot from it and was glad he came.

“Overall it was pretty good — what I was expecting — but I enjoyed it,” Halvorsen said. “I only had surface knowledge of all this, but she went way more in depth on everything.”

African-American citizens who served in World War I and World War II not only changed how their race was viewed as fighters and soldiers but also became the seeds and backbone of the Civil Rights Movement, Ducksworth-Lawton said. This, she said, is what she hoped audience members would take away from her presentation.

“Black men and women have always served and have served honorably,” Ducksworth-Lawton said. “Black soldiers are the backbone of Civil Rights Movement, but also, service gave them special leadership positions within their community.”