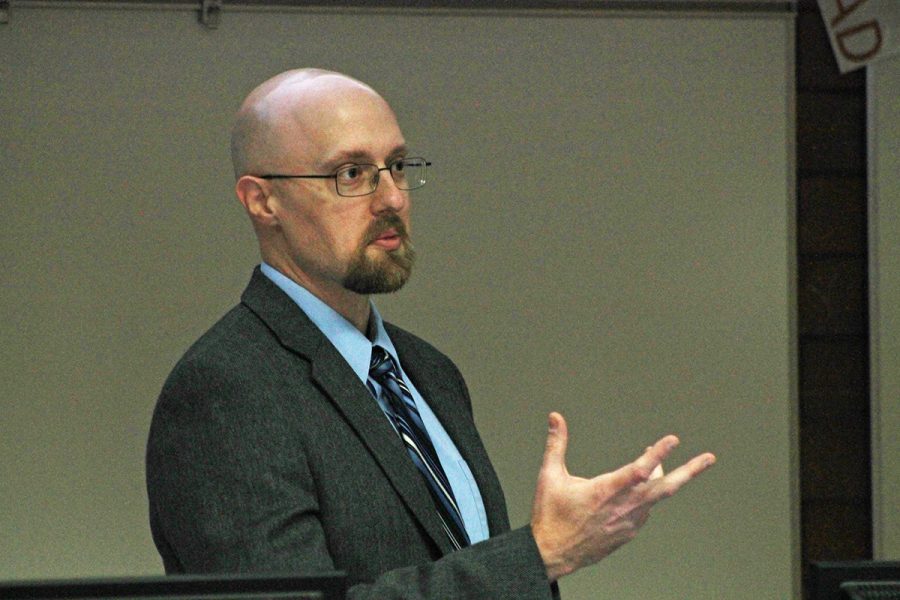 Eric Kasper opened a dialogue about the new Freedom of Expression policy on Wednesday in an event co-sponsored by the UW-Eau Claire Pre-Law Club, the UW-Eau Claire Center for Constitutional Studies, Student Senate and the Criminal Justice Association.

The Freedom of Expression policy passed by the UW Board of Regents needs clarification but positively affects students’ First Amendment rights, said Eric Kasper, a UW-Eau Claire political science professor and director of the Center for Constitutional Studies.

Kasper lead a discussion about the policy and its implications on university speakers, student speech and student protests from 5-6 p.m. on Wednesday in Hibbard Humanities Hall.

To begin, Kasper explained the First Amendment and the limitations on its freedoms that the government is allowed to exercise.

Kasper said the government can limit free speech based upon its nature, the speech’s setting and other government interests (i.e. encroachment on the rights of others, violence, or burden on government function).

When it comes to public speeches, Kasper said the “Heckler’s Veto” occurs when a threat of violence is created with a speech. Once determined, law enforcement can remove the speaker. This gives power to the protesting efforts of the audience, Kasper said.

Kasper also shared instances where government infringement on the First Amendment takes away a person’s freedom of speech. This included overbreadth and what’s known as a “chilling effect.”

Overbreadth, Kasper said, is closely related to vagueness. Overbreadth occurs when a policy’s restriction of free speech overreaches what is needed to limit that speech.

The “chilling effect” is the fear or uncertainty that surrounds a law. The government isn’t limiting speech explicitly. However, people avoid expression because they “don’t want to take a chance” with speech that would put them at risk for punishment, Kasper said.

These two examples of infringement play into some of the areas of the Freedom of Expression policy that Kasper said he feels need clarification.

The Freedom of Expression policy reiterates the limitations on disorderly conduct already covered in the UWS Administrative Code. This, Kasper said, risks overbreadth.

If students are fearful of the punishment surrounding the policy, Kasper said, this could stop them from exercising their freedom of speech — an example of the “chilling effects” of the Freedom of Expression policy.

“These are issues we need to clarify … if this policy is going to be in place,” Kasper said.

Conversely, Kasper said the Freedom of Expression policy has positive aspects, too.

“If speakers are not permitted to speak,” Kasper said, “It affects the people who went to that event as well who maybe wanted to … challenge that speaker … particularity if it was an event that they had to pay to get in.”

Emily Ecker, a senior broad field social studies student, said the Freedom of Expression policy will likely not directly affect her because she isn’t planning to protest anytime soon. But Ecker said she still wants to be knowledgeable about her  First Amendment rights.

“I’m always very interested to learn about my rights as a student,” Ecker said.

Moving forward, Kasper said he thinks that the policy stands in the hands of each university to interpret the policy, especially the vagueness concerning what qualifies as disorderly conduct.